The planks going from pole should be straight like they are in the original model.

If I use a low poly fence that is made up of simple boxes only the deformation the planks behave like I expect them to. 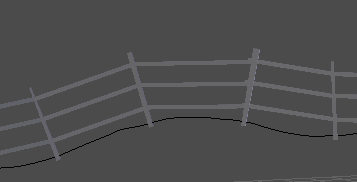 This is the behaviour I expect from the high poly fence. I think the low poly fence works because there are no vertices to deform in the planks beside the endpoints. How can I prevent the planks from deforming with the curve?

I want it to distort the poles, so that it looks like the are follow the surface of the terrain. I do not want to planks to be bend, only stretched to connect to the poles as needed

The curve contains too many unnecessary points. Additional curvatures will bend the object where you don't want.

For better control in this case, I suggest to separate planks from poles, making them as two individual objects. Then use one simplified curve (or two curves) to control each of them.

Not the answer you're looking for? Browse other questions tagged modeling bezier-curves modifiers or ask your own question.

1
How can I align a text object to curve without deformation?

5
Array not following curve shape
1
How can I align a text object to curve without deformation?
0
Curve after Array modifier messes object dimensions
1
fence mesh duplicates along mountain plane
2
Merging an array of paths to be used as a curve deformer
1
Rigid Body not working with Passive / Animated / Mesh / Deforming
1
Trying to make a rope wrap around a pole using Bezier Curve + Array