It is standard to create shadeless materials by using the emission shader, often with a Lightpath Is Camera Ray to prevent it from casting light on other objects. This creates a flat color regardless of lighting. It does not get any shadows cast on it, and doesn't have any shading on it.

I want to create a material that will not allow any shading on it (so no shadow terminator, same flat color) but WILL allow for shadows to be cast upon it, and most importantly, somehow responds to the overall light level in the scene. In other words, it can change in brightness when in well lit areas, but remains flat.

The purpose of this is to allow for flat shading, but also allow for low light and high key scenes. Currently, the emission based shadeless material will give the same color in a dark room as on a sunny day.

For a full example, consider this material on a character's face: 1)If the light was striking it directly, the whole face would be the same color, which should be the brightness you would have in the brightest area if using a regular diffuse shader.

2) If the character's face wasn't in direct light, it should all be the brightness of the darkest area if it was a regular diffuse shader.

3) If the character's face was strongly lit on one side but not the other (hatchet lighting), it should be fully bright on the bright area, and fully dark in the dark area, which could probably be achieved with some sort of color ramp or have it based on normal.

4) If another object casts a shadow on the object, it should only darken in the area the shadow is cast on, like a regular diffuse. The cast shadow shouldn't be factored into it's shading.

Ideally this would be solved within the material, but compositor options could also work.

If I understand what you want correctly, you want something the responds to light like a normal diffuse shader, except that it ignores the angle the surface is from the observer. Have you tried simply using a diffuse shader, with the roughness set all the way up, and the surface normal tied to the "Incoming" output from the Geometry node. I may have misunderstood what you want, but it sounds like something close to what you're asking for.

Drudge mentioned that when he tried this technique, he seemingly got it to mostly work, but that the shadows were too harsh for his(/her?) needs. As I replied in my comments, the harshness of the shadow should be directly related to the size of the light source. To demonstrate this, I rendered each of the sample images below twice: Once with a light source similar in size to the sun (as viewed from the Earth). The second image with a light source radius 7 times bigger (I reduced the Strength by a factor of 49 to maintain the lighting intensity. You can actually see the enlarged sun in the reflection on the mirror ball I threw in the background.)

The images rendered below show (on the blue Suzanne):

If you can point out where these images differ from your expectations, I'm happy to attempt to correct the problem. 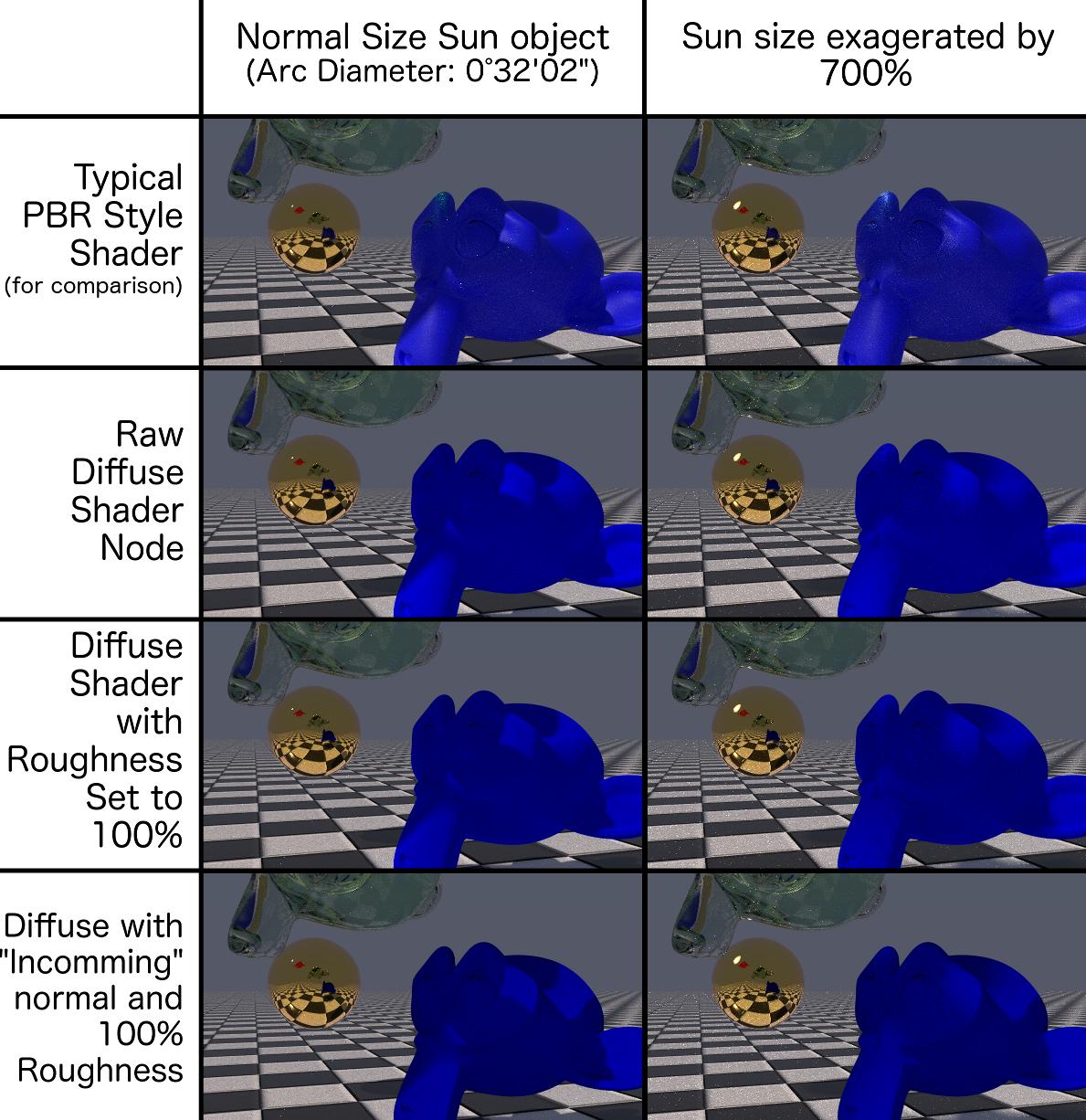 We can use compositor tricks as you proposed.

I am going to set the scene such that the shadless objects are in one layer and the others in another.

I am going to create a new render layer with exactly the same layers but I am going to set the Material override to a material which is just a diffuse shader. And another one which with the same setting but with excluding the layer with the non shadless objects.

The material for the object should be as you described, an emission shader with camera ray as input.

Since we enabled all passes, we cal selectively apply the only shading we want.

Example 1: Shadows that other object casted: 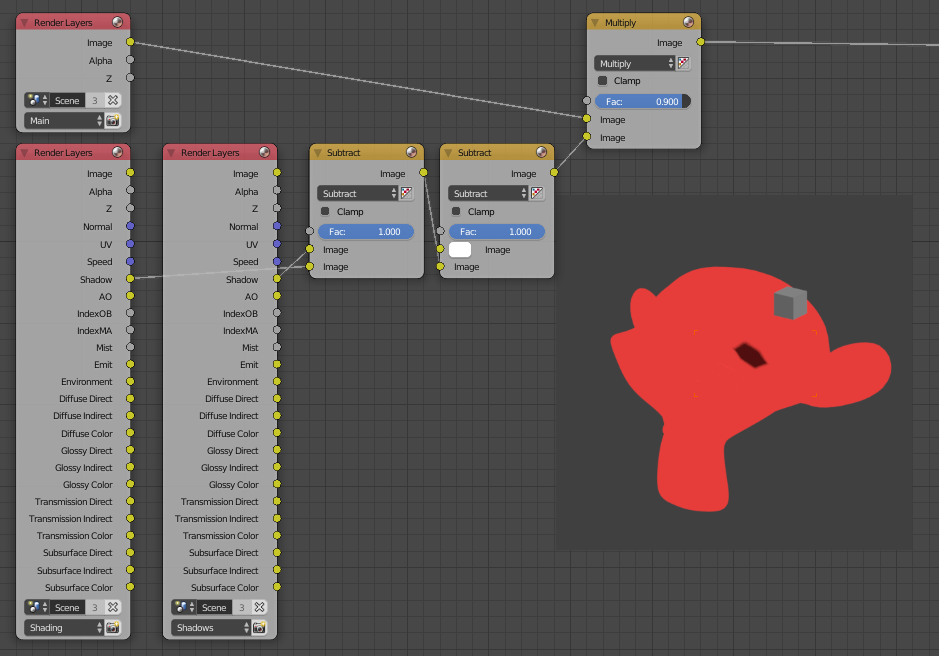 I can add the diffuse direct of the shadow layer to the result to get highlights and I can use Indirect lighting. 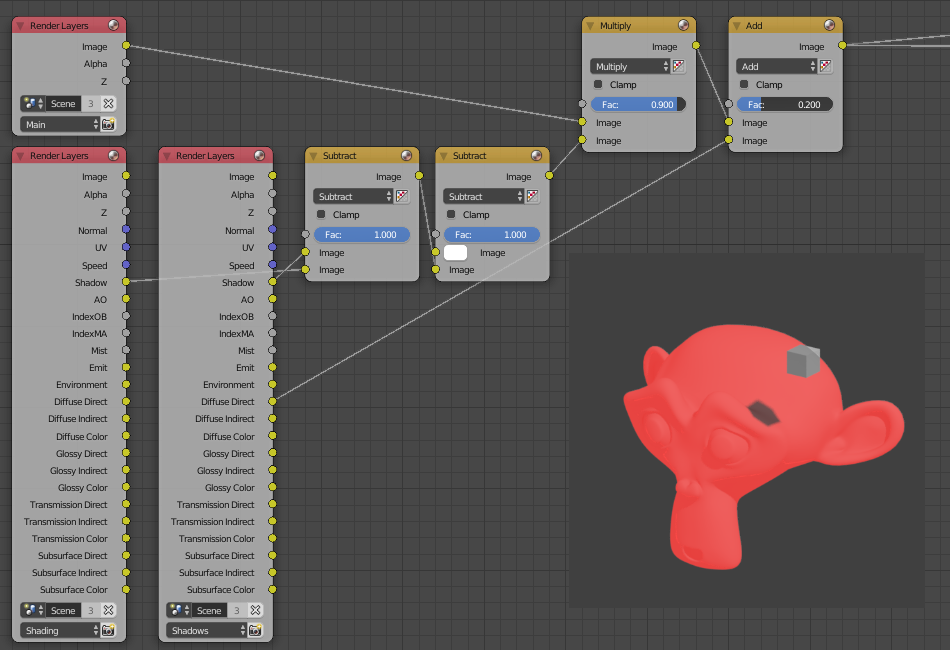 And you can play with passes to get exactly what you want.

Not the answer you're looking for? Browse other questions tagged cycles-render-engine materials compositing-nodes or ask your own question.

15
What does the Roughness setting on a diffuse shader do?
1
Shadeless mesh that's being affected by lighting?

2
Make material looks less 'shiny'?
1
Shadow from texture not showing up because of a transparent shader
7
Strange black shading. Cannot fully light mesh. (Cycles)
1
cycles - different effects when order switched, even with opposite factor
0
Blender 2.8 - eevee Silver/Chrome material
1
Is it possile to create a flat-color (shadeless) shader in Blender 2.83 that is also flat when in a reflection?
1
Is there a way to disable self-cast shadows on grass (particles,) but still have grass receive shadows from other objects?
3
Material that receives shadows but no shading