When it comes to recreating the shading of metals like chromium with such extreme reflection curves it's obviously inaccurate using one averaged reflectance curve. Also eye-balling the values appears impossible so it becomes relevant creating individual curves as accurate as possible.

Looks like feeding in a RGB Curves node is the way to go. However I can't figure out how accurate this mechanism is. What approximation model cycles is using? Schlick's approximation? Is there anything else to consider like shifting the incidence angle?

Q: How to build an accurate fresnel curve based on the data of refractiveindex.info?

And .blend with linkable/apendable group if you feel lazy to build this:)

where N is Refractive index and K is Extinction coefficient. For dielectrics, the complex part can be omitted, so N becomes the IOR. However metals do have the complex part.

You get the measured N and K values from here: https://refractiveindex.info/. The problem is, that both N and K depend on the wavelength of light.

So to render metals correctly, Cycles would have to be a spectral renderer taking into account the polarization and wavelength of light.

The best we can do is to approximate and sample just for red, green and blue light.

As per the Vray OSL reference the red, green and blue values are taken at 0.65, 0.55 and 0.45 micrometers. Put the wavelength value in there and read N and K: 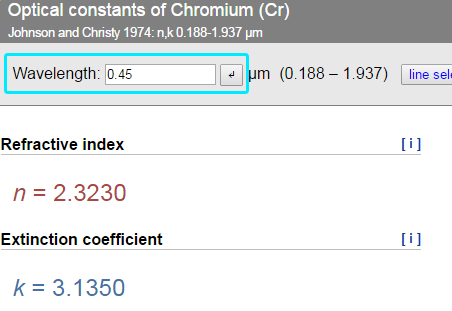 The usage is same as in Scott Milner's answer. This is how the Conductive's Fresnel output can look like (with extreme values): 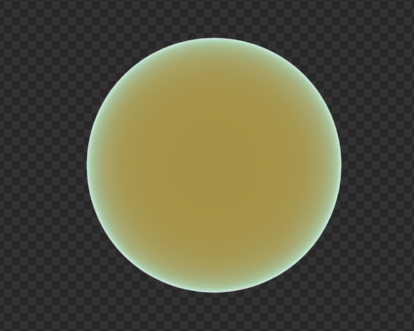 You can see it produces the Reflectivity color and Edge Tint color that you would normally input in an artistic-driven metal shader. But this is from exact measured values and with correct math so the way the colors blend towards the edge is more accurate than using an artistic metal shader with hacked (usually just adjusted for the base reflectance) fresnel node (which in Cycles gives dielectric reflectance response curve).

Connect this into Glossy shader color. The shader should have 0 roughness to be correct.

[UPDATE]: As roughness increases, rays have higher probability to hit the surface dead-on as in center of the sphere. When roughness reaches 1, the whole sphere is shaded with the reflectivity color:

Here is an upgraded PBR version with roughness all incorporated into one group:

Old Answer: (revised one below) 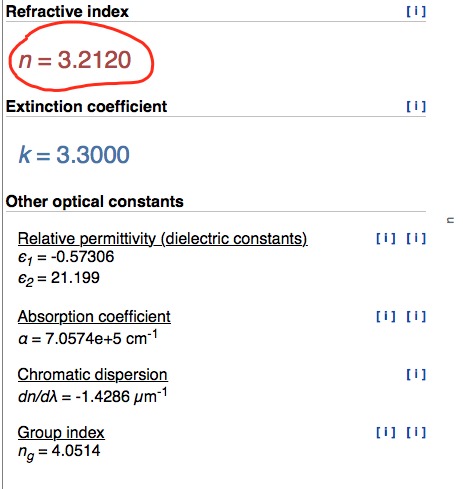 As long as the material you are creating is dielectric, just plug this into a Fresnel node, and you should be good to go. Custom RGB Curves are not physically accurate and will not give you what you want. What it looks like: 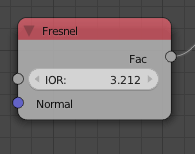 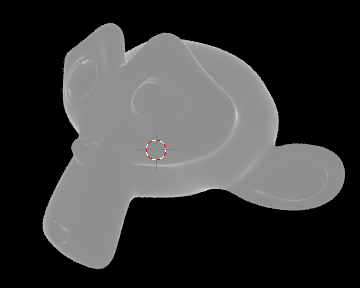 Note: I have seen tutorials that say that Blender's Fresnel node isn't accurate, and that you have to do various things to the normal input to make it more physically accurate (Edit: as Ibalazscs said, this is only when taking into account roughness, and this method is also correct.). I tested this by creating a group of Math nodes with the Fresnel Equations and comparing it to the Fresnel node. They look exactly the same: 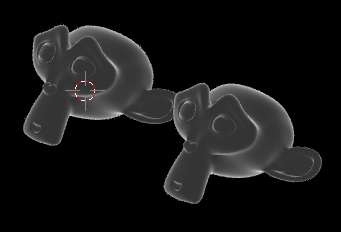 The above answer was just for dielectric materials. The question was asking for conductive (metallic) materials. After looking through some code and reading this page from the Developer site, I found that Blender only has partial support for conductive Fresnel. It appears that it was going to become part of the Cycles node system, and then was abandoned. The developers did include it, though, as an OSL shader template, so it can still be used.

To use it, first enable Open Shading Language under the Render settings. (Note: Using OSL for this slowed down my render times a bit.)

In the Node Editor, add a Script node (Shift + A > Script > Script). Select the text file you just created (fresnel_conductive.osl).

Now, here's the tricky part. The IOR of a conductive material is a complex number in the form n+ik. Not only that, but it changes depending on the wavelength of the light hitting it, so the IOR is different for different colors of light. This OSL script takes only three IORs and interpolates the rest with a spline curve. It is still a good approximation, though. Onward! 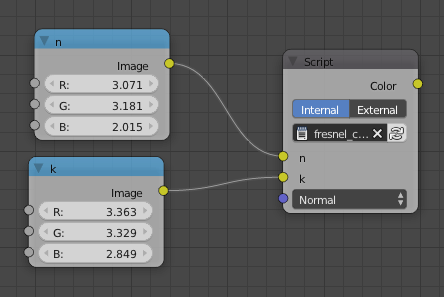 Although this is an imperfect workaround, there is hope! There is an open developer page on a Metallic BSDF that would do all of this better and just built in.

Sorry that the initial answer wasn't what you were looking for. Hope that this helps more.

Not the answer you're looking for? Browse other questions tagged cycles-render-engine materials shaders photorealism or ask your own question.

43
How to create a mirror shader?
2
Rose gold material color for jewelry?
2
The correct Node workflow?
2
Brushed Nickel in Blender
0
Is Principled BSDF suitable for metals in terms of Fresnel?
1
Adding shiny gold material to a slice of bread
2
How to make physically accurate silver in Cycles?

15
What does the Cycles Fresnel Node do?
15
Relation between Fresnel IOR and Layerweight blend?
1
Problem with Fresnel Artifacts in PBR Shader
0
Equivalent Mix fac to Fresnel?
8
If I look a fresnel node trough an emissive shader what reflectance curve do I see?
2
Custom Fresnel Node for Specular Workflow
0
Fresnel gradient shader?
2
Does fresnel node corresponds to fresnel-equations?
0
Is Principled BSDF suitable for metals in terms of Fresnel?