I'm trying to recreate the windows 10 background effect on a logo I've made in blender.

Half the logo has a glass like material, the other half has a steel like material. And I'm using cycles at the moment.

I've put various light sources behind the logo and tried a few variations of volumetric scatter in the world to get the god ray sort of feel coming off the logo, but it's just not looking anywhere near as effective as I'd like.

I know the win10 background was a real set and photographed, but has anyone come across a tutorial to do something similar in blender?

I'm very new to the tool, I'd appreciate any pointers in the right direction. Using Volumetric scatter produces the most accurate results but required a considerable number of render samples to get satisfactory results. A much more efficient alternative is to fake the light scattering using an Emission volumetric shader.

Create an image of the light emission - black where there is no emission and brighter where light is emitted. For example, to mimic the Windows logo you could start with an image as follows : 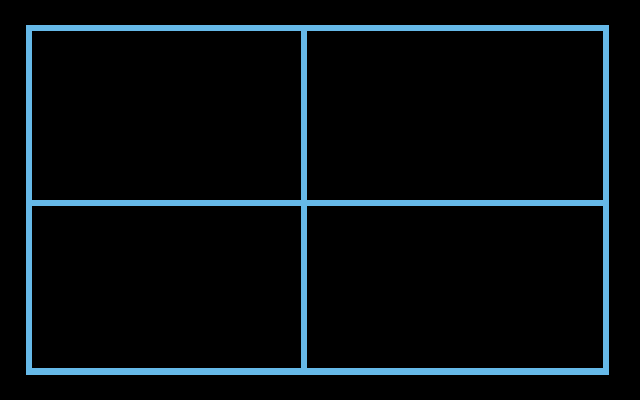 You can use the Surface of a mesh to render the image of the 'window' and the volume for the rays and the shader will use the Object coordinates. It's helpful to move the Origin of the mesh to a point on the surface and to use a Mapping node to re-orient the coordinates to something more intuitive. In my case, I've used the default Cube, moved the origin to the centre of the face crossing the -Y axis and rotated the coordinate space so that X/Y is along the axes of the window and Z represents the distance from the window.

To achieve this, start with the default cube, open the Properties panel (N) and move the 3D cursor to 0,-1,0. open the Tools panel (T) and Set Origin to 3D Cursor. 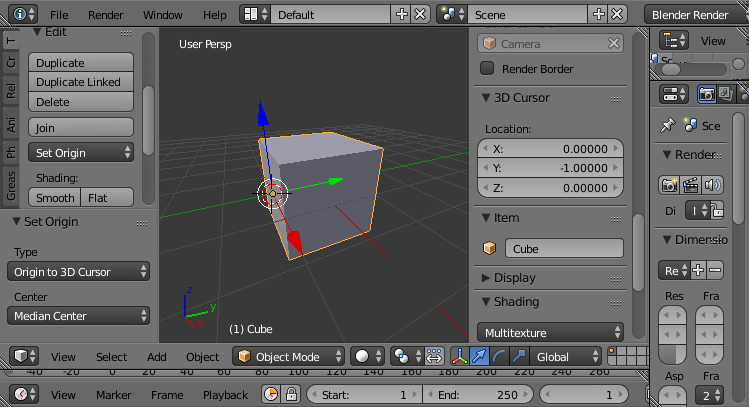 Assign a material and add the following nodes :

Using an Emission Shader to add the Image texture will result in the image being rendered on both the 'back' and 'front' surfaces of the mesh. To 'hide' the front face we can use the Z coordinate to set Strength to zero whenever Z is greater than a constant and adding in a Transparent shader makes the mesh transparent (Note : I've set the Transparent shader to be less than 100% White so that it shows in this image - normally this would want to be 100% transparent so the mesh is not visible.) 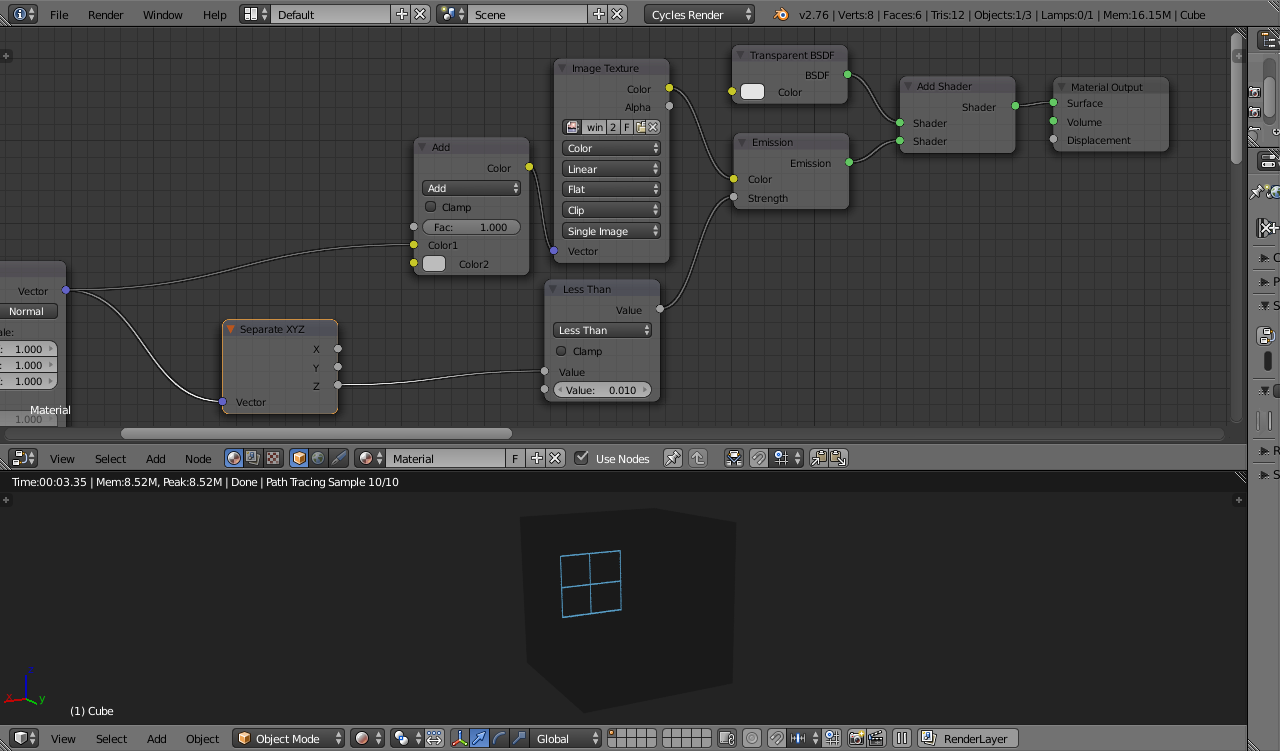 To add the rays we can start by simply adding another Emission shader driven from the same image and connected to Volume Material Output socket rather than Surface. This will produce parallel rays : 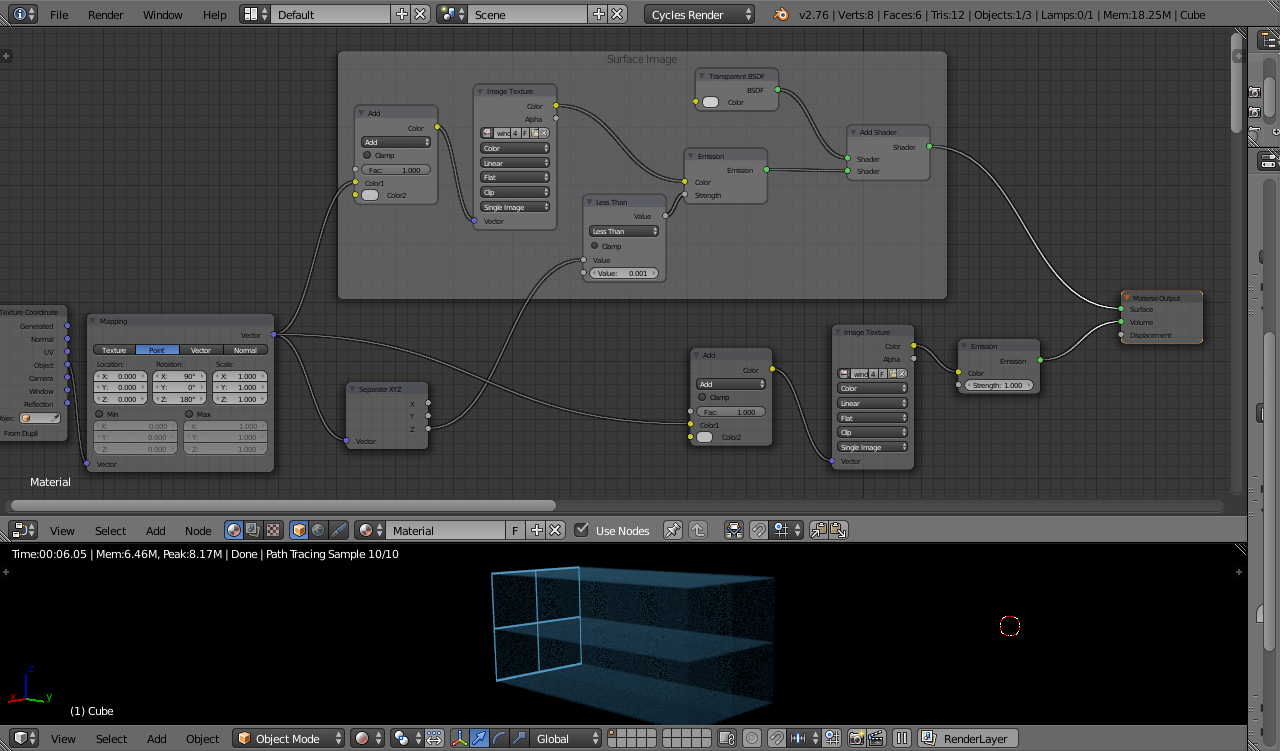 NOTE : The MixRGB Add nodes translate the coordinates so that the textures are centred around 0,0 rather than the texture origin falling at the bottom-left of the image.

To get the rays to diverge you can scale them using the Z coordinate - the scale should be '1' at the 'back' surface and increase as Z increases. 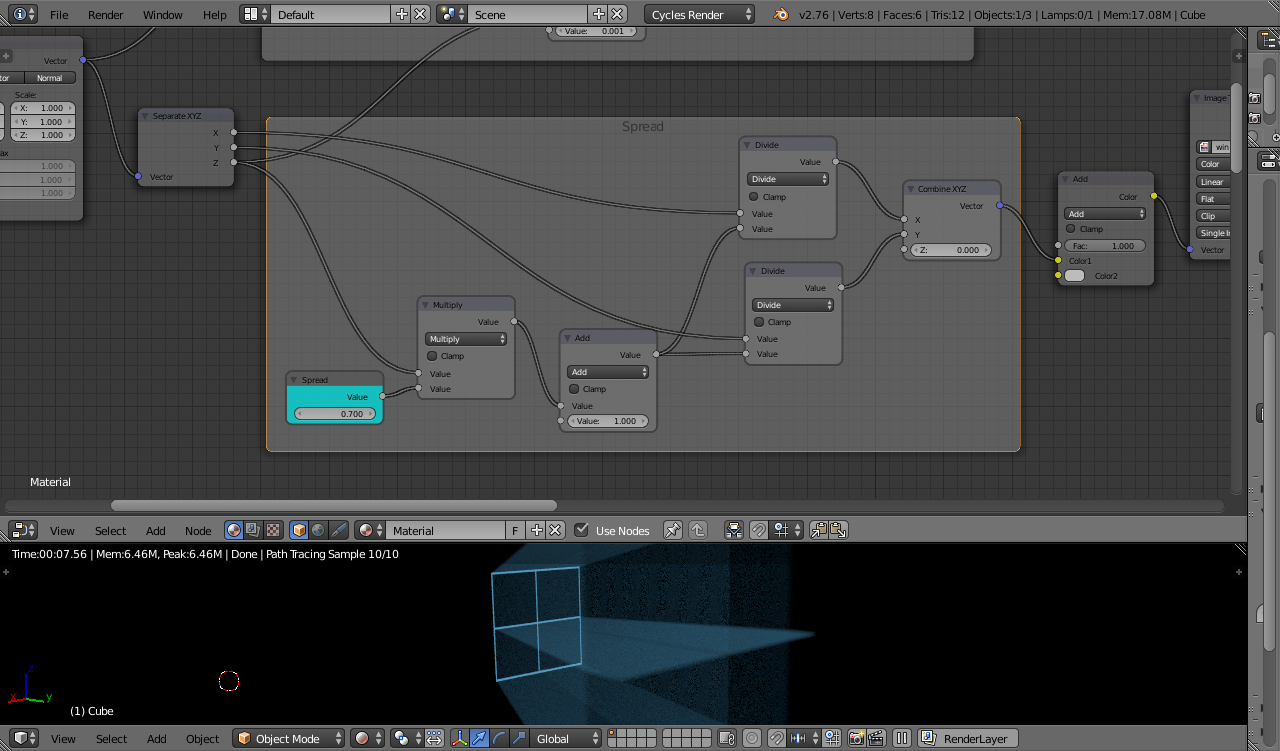 It may be useful to be able to control the direction of the rays and a similar technique can be used to add offsets (also based on Z) to Skew the rays as they travel through the volume.

The rays should fade along their length. For this we can simply vary the strength based on the Z coordinate :

We also might want them to spread out as they travel. Again, the Z coordinate can be used - this time controlling the effect of a high frequency Noise texture to scatter the rays :

Finally, we can add some variation to make the rays less uniform.

Bringing it all together produces the following material :

Tweaking the source image and varying the Z-coordinate of the noise used for the rays and adding a Fog Glow in the compositor can produce the following :

Of course, you aren't just limited to single-colour source images : 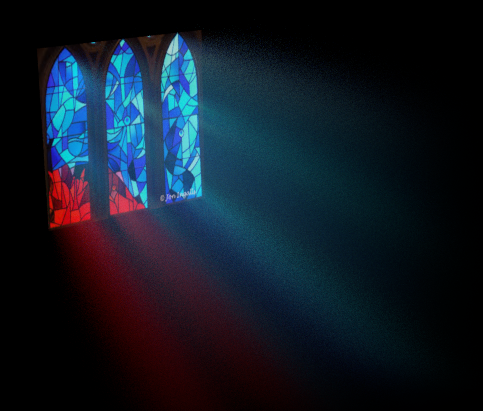 You should look at the sunbeam node in the compositor - after render, you can add several filters and color mix nodes, but a really good way to get this effect seems to be with the sunbeam node to control the lighting effect. I didn't have time here, but you might try several versions mixed over one another with varying lengths of ray so that they seem to dissipate ove 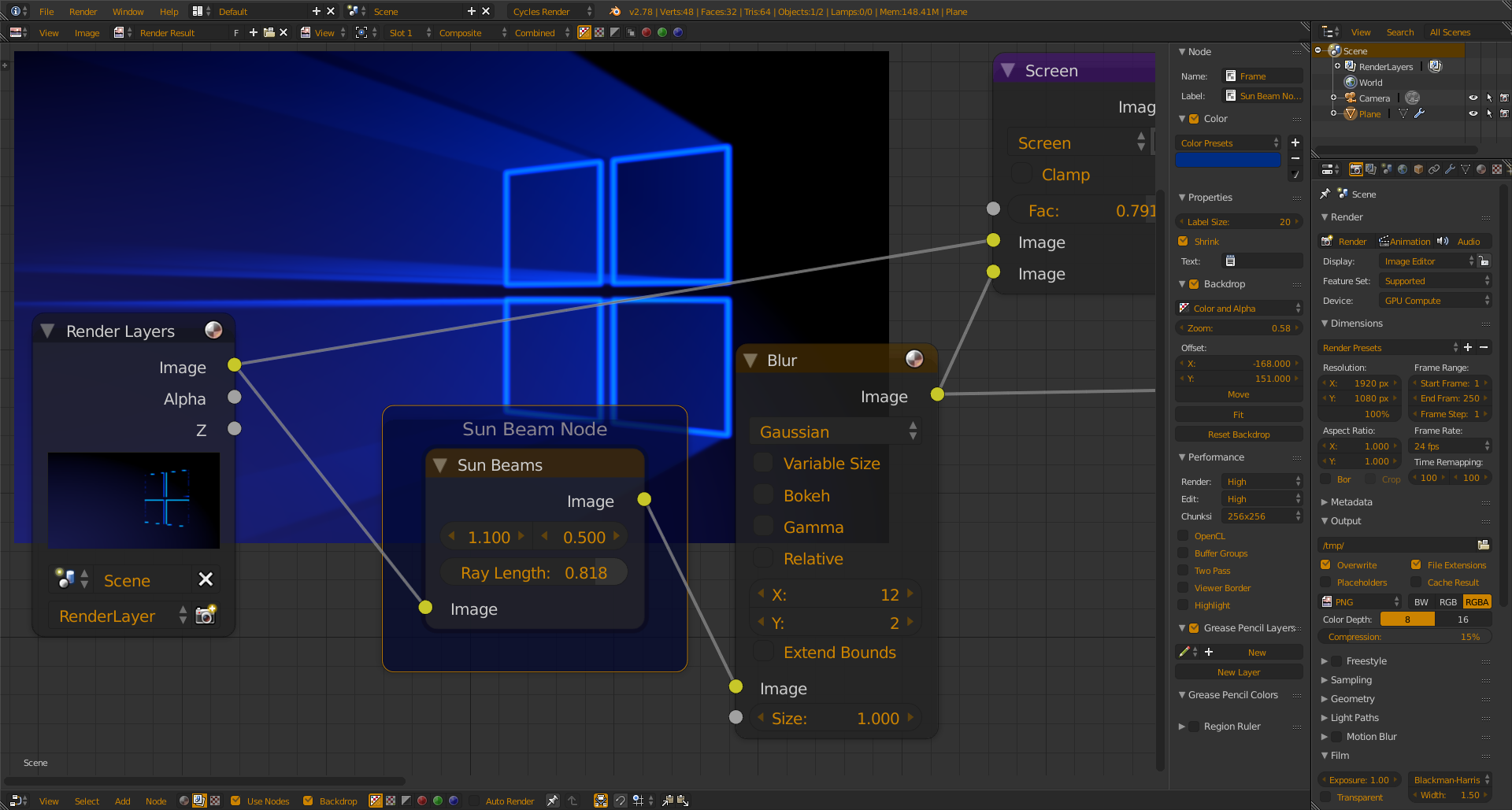 Not the answer you're looking for? Browse other questions tagged light volumetrics effects shadows lighting or ask your own question.

2
How was Regency logo effect done?
0
Volumetric church window effect
12
Realistic Light Reflection
3
How can I make a cone of light be more realistic?
1
How can I create a stained glass light effect?
0
How to make light leaks or sun ray?
0
Is it possible to reduce light emission to some directions?
0
How can I make a glowing material?
1
Ray effect in cycles

6
Volumetric Spot Light with Cycles
10
How to achieve white "fog" effect within an ice cube?
19
Distance from the surface as an input node for use with volumetric materials
1
How to create volume scattering material not throwing shadow?
4
I'm trying to recreate my logo in Blender but I'm out of ideas