How to multiply vector by scalar in material nodes?

I'd like to do arbitrary vector math with the camera position, shading point, and possibly other points. As a test case (blend file), suppose I want to make a shader that will draw a simple gradient based on distance from the shading point to the camera in one of two ways.

The two methods of getting the desired distance are: 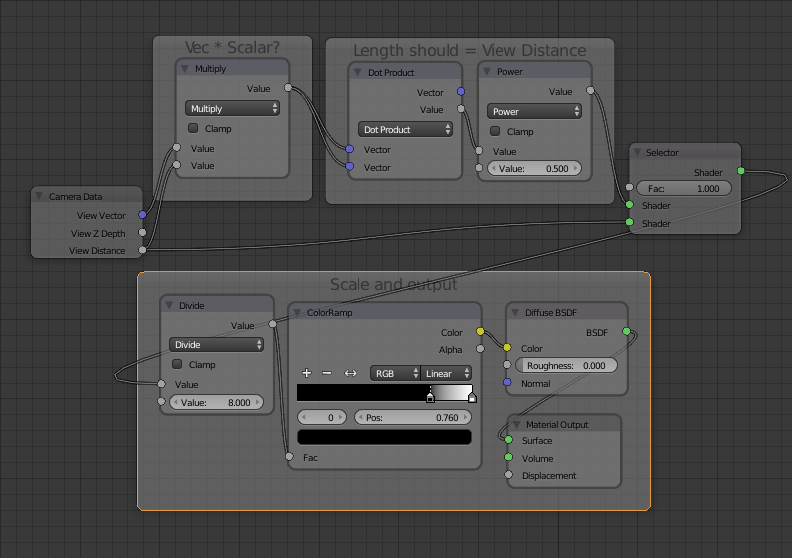 What can I put in the "Vec * Scalar?" frame so that the material will look the same no matter how the "Selector" Mix Shader Factor is set?

You should think more about the data types. If you want vector*scalar, use MixRGB set to Multiply (an RGB color has three components, like a vector), and not a simple scalar math node. See my answer to this question for an example of vector*scalar: Scale Texture with a Value-/Math-Node

Also your selector seems to be a Mix Shader (I didn't download your file, but it has shader inputs and outputs), and you should not put scalars into a node that expects shaders.

EDIT Just for completeness: There are also other ways of doing vector*scalar, like using a vector Mapping node and setting the same X, Y, Z Scale, or separating the vector components with a Separate XYZ and multiplying the three scalar coordinates individually, and merging them again with Combine XYZ.

If you don't mind using Open Shading Language, it's pretty easy to do make a script node that does vector component multiplication:

Not the answer you're looking for? Browse other questions tagged materials node-editor mathematics or ask your own question.

8
Scale Texture with a Value-/Math-Node

2
How to make a texture always upright relative to the global Z?
2
Render points only if visible from another camera
9
Light path Transparent/Diffuse Depth
2
Finding the closest point on a line defined by two points
0
How to turn the Compare Math node result into a gradient?
3
Bake exact vertex positions to Float32 image?
2
How to use the vector of another different object as information for material node?