Fur looking different than the preview when rendered

It is the first time I'm trying to make fur in Cycles, I'm far from being an expert so I followed Blender Guru's tutorial for that and it looks the way I want it in the preview. But once I tried rendering, the fur looks way more long:

I have already tried to turn down all the sizes, to zero even, but nothing changes, it still looks super long when I try to render.

Like I said, this is my first time trying hair/fur and my blender knowledge is very limited so I'm sorry if this is a beginner mistake but any help would be very appreciated!

I think it has relations with Particles>>Display>>Color also set to 7. 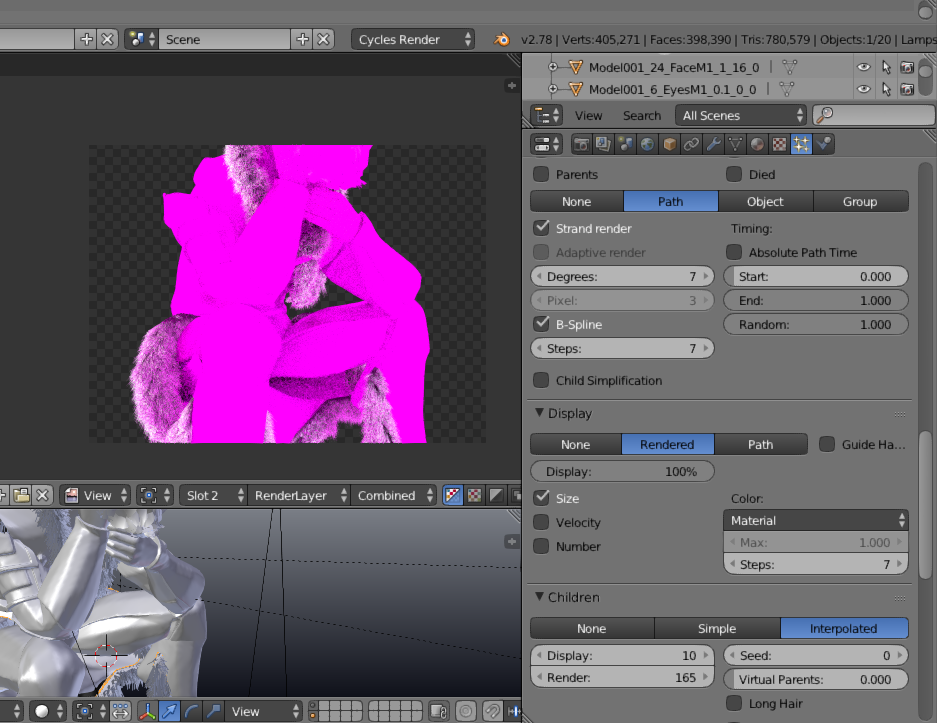 I can't see anything wrong with your hair settings, so the problem is likely to be elsewhere.

Check each modifier above the hair particle modifier and make sure their viewport settings are the same as their render settings. This means they should all be visible in the viewport and if there are any settings that are render specific (e.g. subdivision count) that they match viewport. In particular ones that add or remove geometry can break the hair cache and cause odd results.

After playing with the blend far a while I can't find anything obvious, I slowly turned off / reset to default all the settings in the hair particle system and eventually managed to make the system render more or less the same as the viewport, however resetting just the last setting changed (brownian in the physics tab) did not fix the original group. From this it looks like the problem is some strange interaction of settings in the group.

My recommendation would be to recreate the hair systems from scratch, doing quick renders after each change until you get something satisfactory. Hopefully someone else can come along and give a better answer though.

Not the answer you're looking for? Browse other questions tagged rendering particles hair or ask your own question.

2
How do I get a particle system to generate meshes for polygon hair?
0
How to increase number of visible hairs in particle edit mode?
2
Hair renders different than the preview
0
Weight paint (for particles) not working
0
How to Export the UV Map of a Cycled Hair Mesh?
0
How do I make hair particles color independent from emitter?
0
How do you get hair to take on the color of the mesh it's attached to?