Projecting Texture onto surface from point

I am wanting to know if I can use blender to project a texture (from a plane, UV Sphere, object, etc) to another object in a silhouette style?

What I would like to do is project the plane onto Suzanne (given here as a reference) so that it is projected from a point (the circle on the right).

I know there are powerful remapping and baking features in Blender, however I am a bit stumped with this one.

Basically I want the rays to hit Suzanne, from a single point, then I can bake them into Suzanne's texture.

I want to do this so I can generate a Matte from a 360º photograph onto a surface. So that I can then composite effects to that surface. Such as crumbling etc. I know that I can accomplish this with texture painting in overlay mode, however I don't think that works with equirectangular images yet.

In the example shown I was thinking I could use an empty as a reference point for the projection, (hence using texture coordinate - which allows access to object) but this isn't working.

I have experimented with UVProject, but this doesn't look to handle 360 textures? http://blenderprops.altervista.org/blender-cycles-double-texture-uvproject-example/

Any help would be most fantastic! 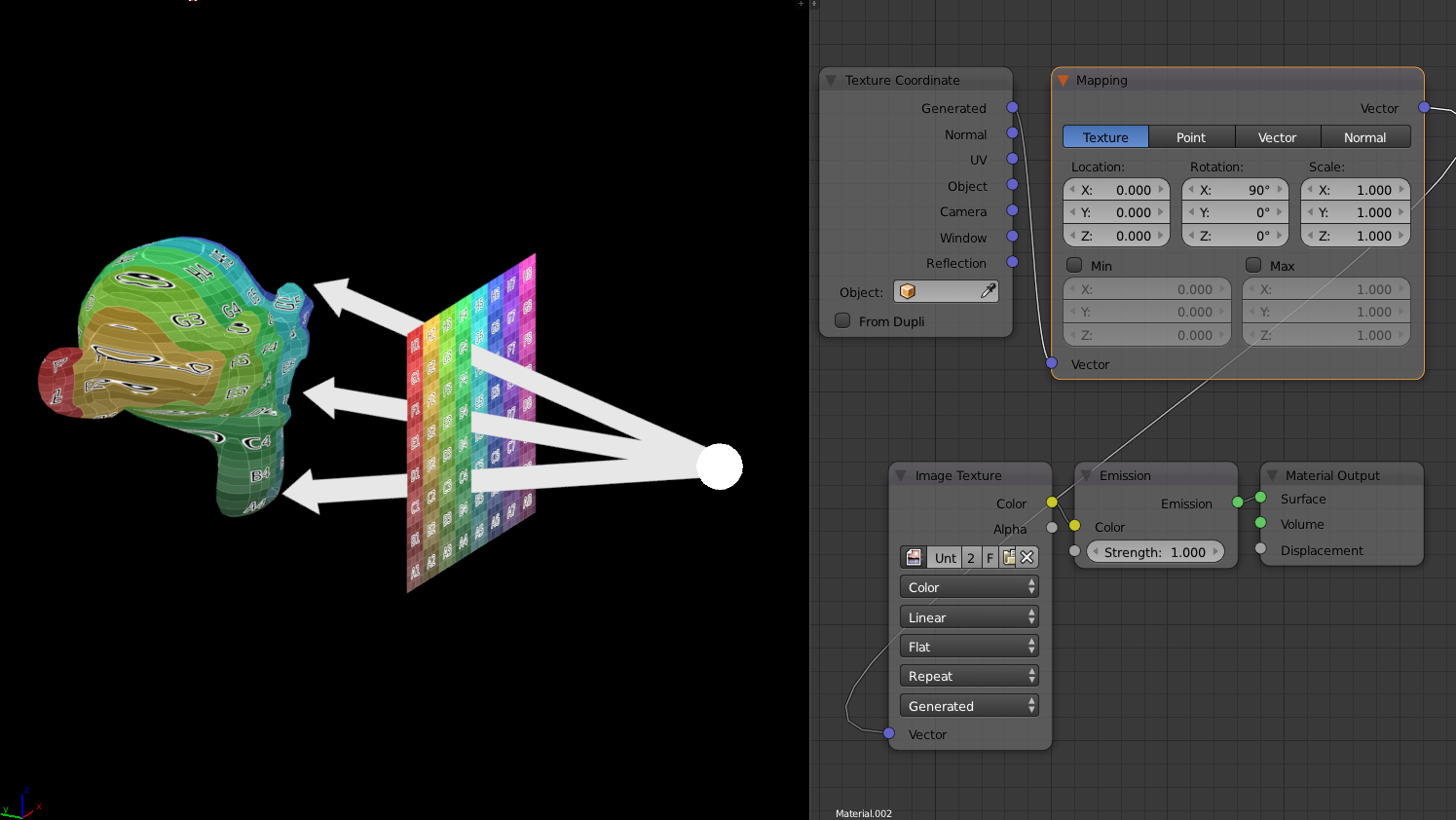 You can project an image from a point onto a surface using Vector Maths.

Start with two reference points - one for the source of the projection (L) and another for the centre of the plane (O). 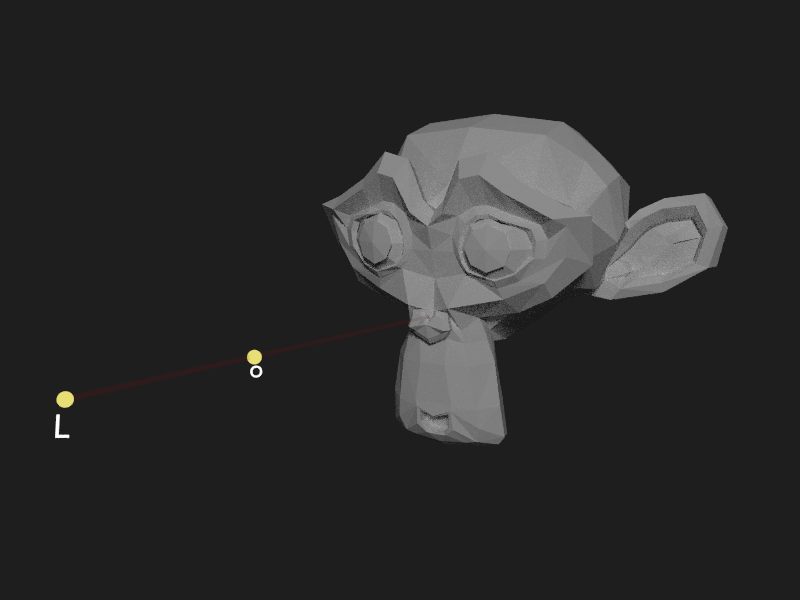 The reference points can be defined in the material using a couple of Combine XYZ nodes to generate each as a Vector (representing the position in relating to the world origin). In addition, a third Combine XYZ node can be used to indicate the orientation of the image used in the projection. You can use Drivers to automatically set each of the XYZ elements of the vectors based on the location of an Empty positioned within the scene. In this way you can easily change the reference points simply by re-positioning those reference Emptys rather than having to manually adjust the vectors. 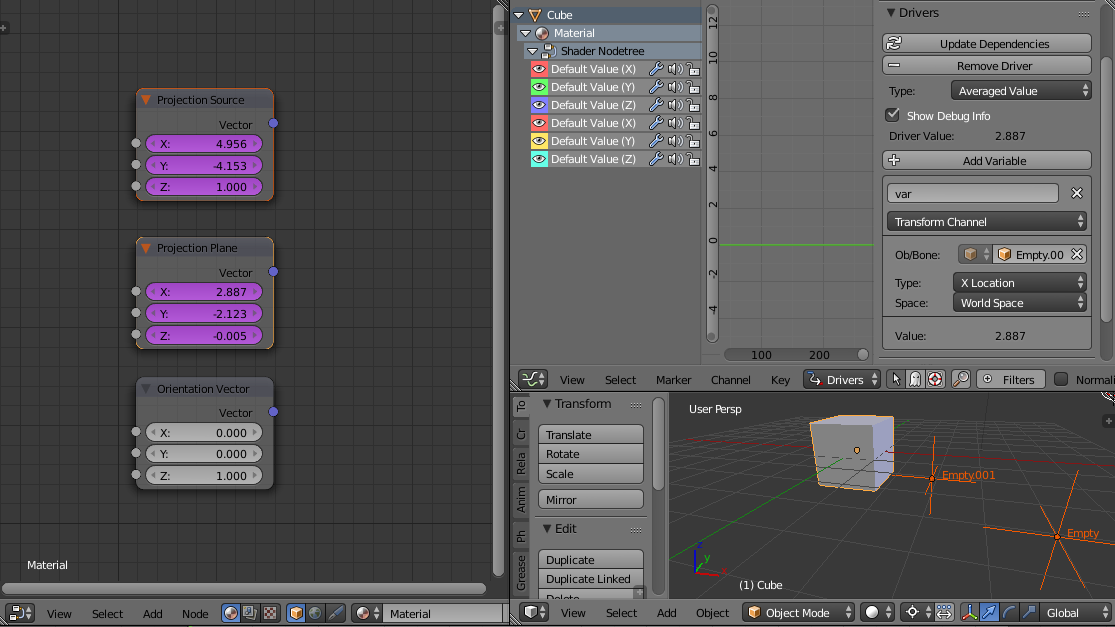 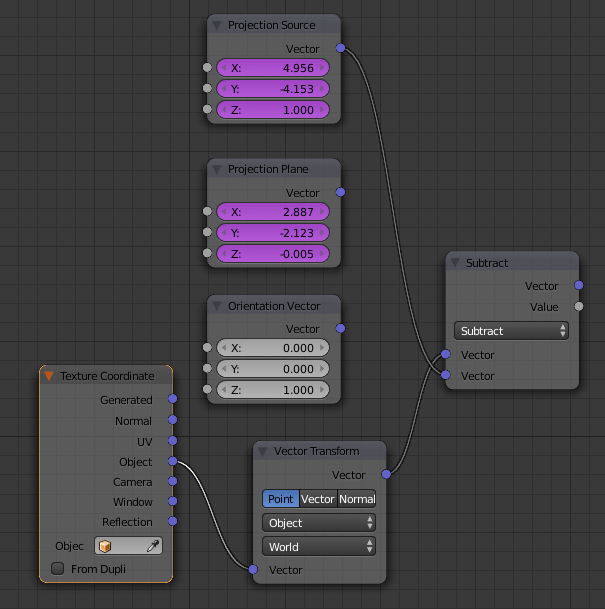 The vector between the two reference points (LO) can be used as the 'centreline' of the projection and this will be perpendicular to the image place. It can be calculated simply by subtracting one vector from the other. 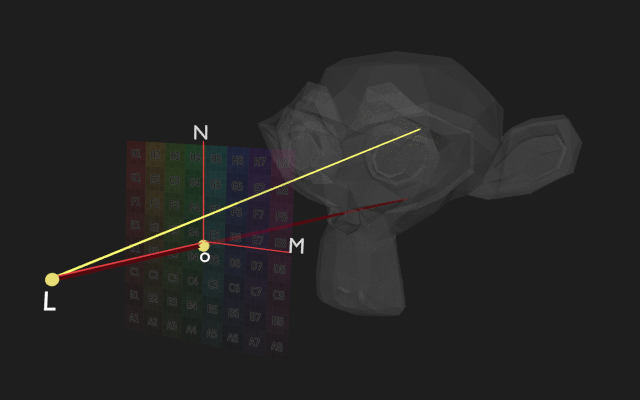 Passing the X and Y vectors through a Vector Math Normalize node ensures they are of unit length (important to ensure the projection is not distorted). 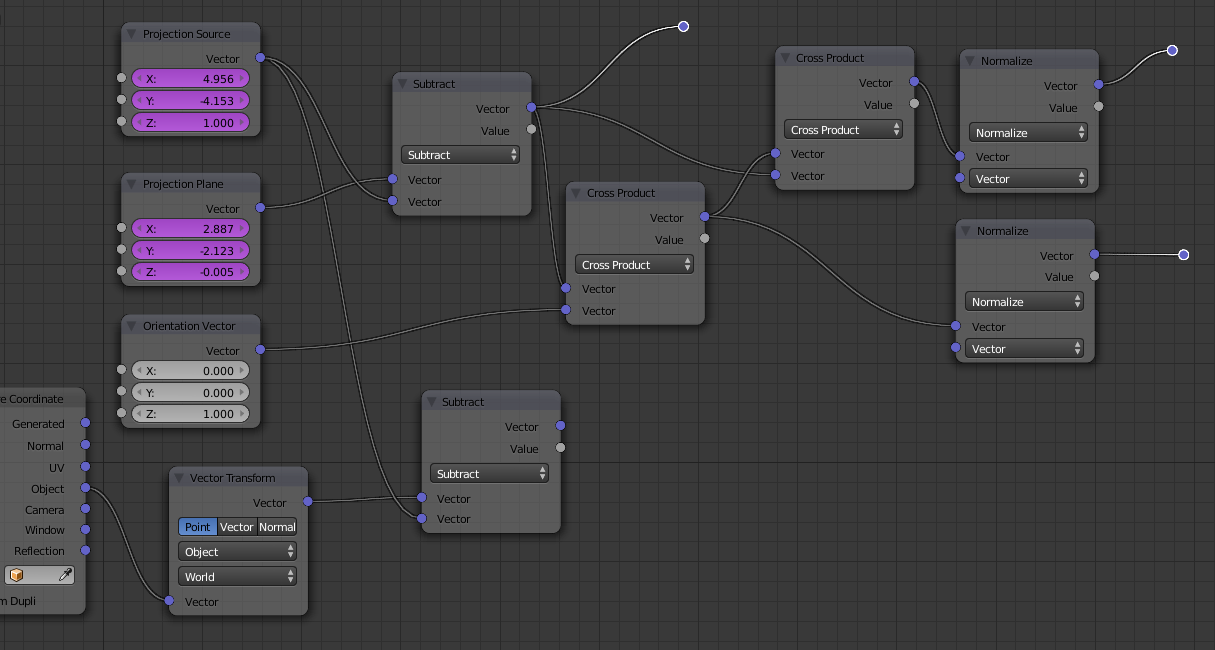 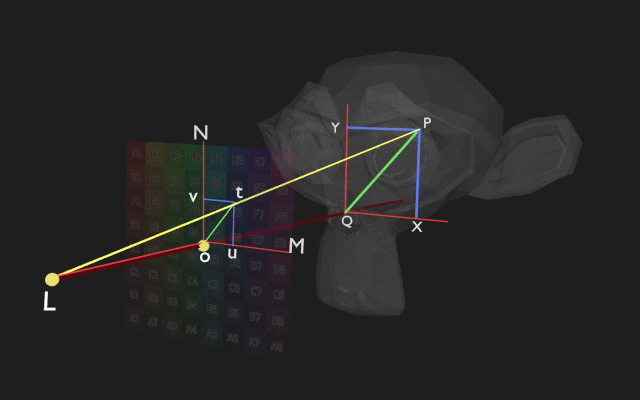 This can be achieved using maths nodes to calculate the ratio (the Dot Product and first Divide) and applying the ratio to the measured coordinates (the other Divide nodes). The results are combined into a Vector. 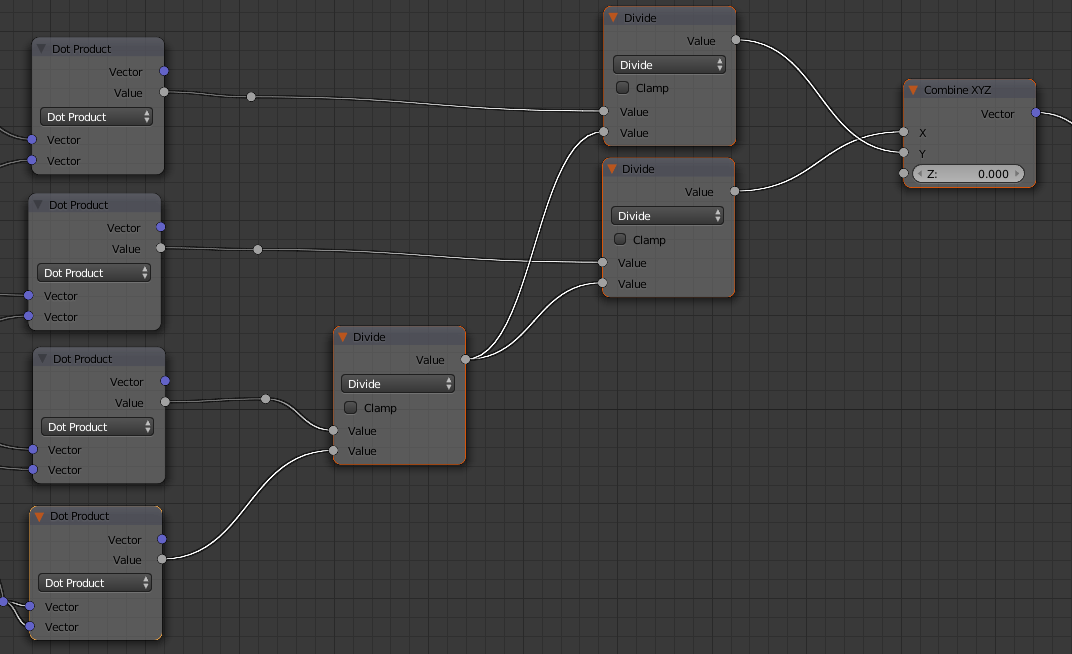 The resultant coordinates will be centred around 0,0 but the texture space is from 0.0 to 1.0 - so an additional MixRGB node set to Add is used to add 0.5,0.5,0.5 to the vector to adjust. The result can be used in a Texture node to apply the actual image to the projection.

In the attached Blend file, move the empties to move the reference points of the projection.

I may have found a solution:

Use the image below for the node group of the object to be projection mapped to.

Load into the 'environment texture' node a equirectangular image. Then by using the camera texture co-ordinates as the vector we get the image projected correctly onto any object in camera space.

Then bake the texture to the object by selecting the 'image texture' node (after generating a texture & unwrapping) and select bake from the render menu.

If there are other ways to achieve this let me know.

I am also interested in using non-equirectangular images as well, so I don't know how well this technique would work for that. 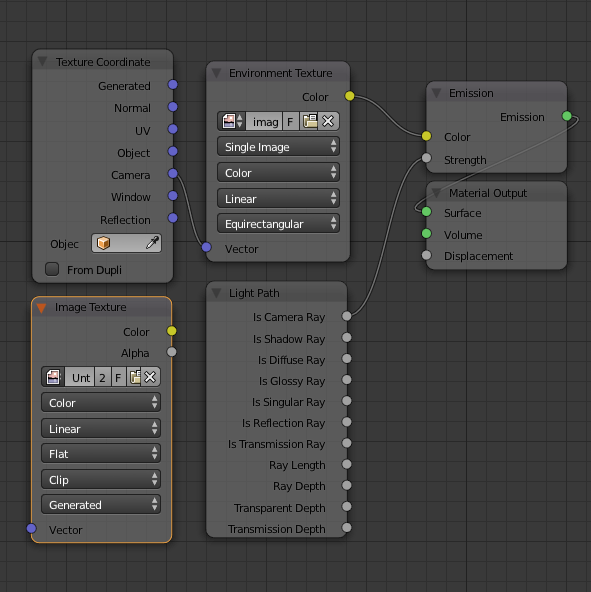 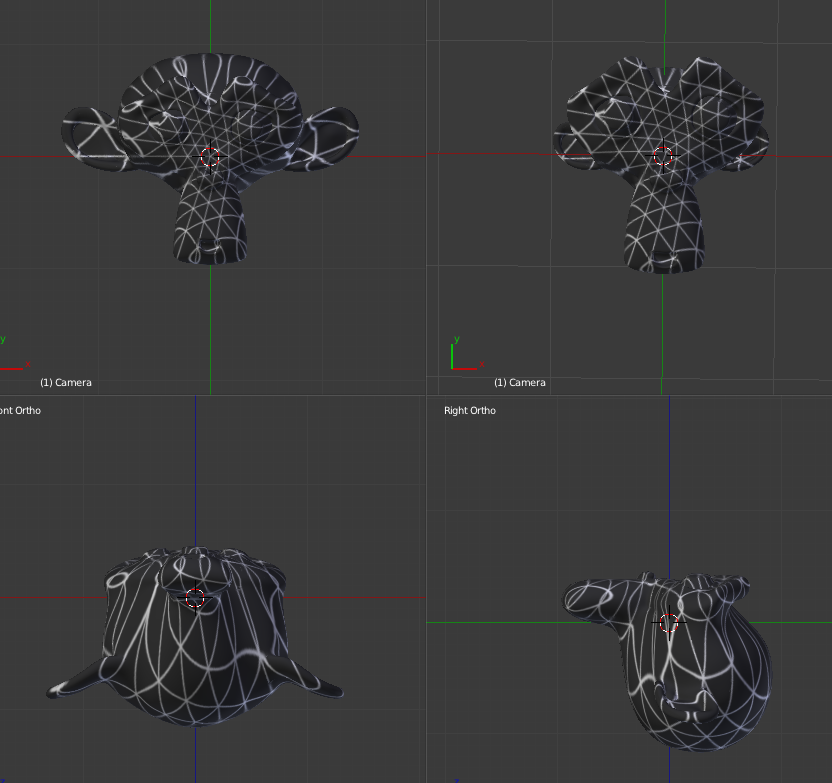 Not the answer you're looking for? Browse other questions tagged cycles-render-engine texturing panoramic or ask your own question.

1
Projecting multiple equirectangular images inside mesh
10
Camera projection without generating UV's?
2
How to display a projected texture on a mesh?
-1
Projecting light through a lens (refraction) onto a surface
1
How may I map several equirectangular sphere images to a mesh?

3
UV Project Modifier in Cycles has no effect. What am I doing wrong?
0
Baking details from a high-poly onto a texture of a low poly model
15
projecting onto a mirror and back?
0
Blender is applying only part of texture onto plane ? -- No Shading -- Bug?
0
Shadow culling in shader for uv projected texture