Can you apply an action to an armature that has more bones than the one that created the action?

I'm trying to create mocap animations for my characters in Unity. I currently use character models and animations downloaded from mixamo.com. I've just created some mocap animations with Brekel pro body v2, and I have imported the bvh file into Blender along with one of my models that were imported as a collada. I am trying to assign the bvh animation action to the mixamo armature. I've changed the names of each bone to match the names of the bvh armature, and the only difference is that the mixamo model has more bones than the bvh. It has a toe, eyes, head top, and extra spine bone where the bvh model does not have them, but everything else is the same.

Are those extra bones causing the issue? If so, is there a way to apply this animation to only the bones they share? I need to keep the current mixamo skeleton.

Here are some added pictures of the problems I'm experiencing.

The first image shows the bvh armature on the left and the mixamo one that I need to keep the same on the right. 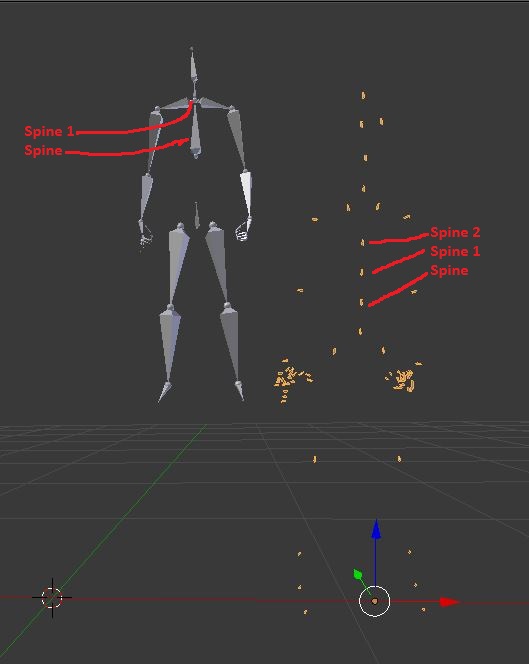 This shows the mesh of the mixamo model in the middle of the animation as well as the bvh armature during the animation. It also points out the problems I'm seeing and looking to correct. 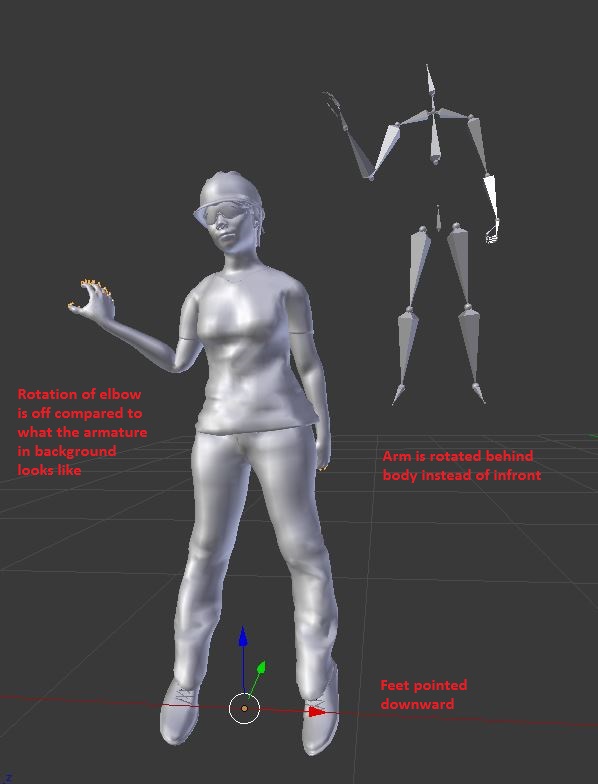 The toe bone shouldn't be a problem, but an extra spine bone might be, as it will have children that are animated by the armature. Because of this it is likely that the transferred animation may never look the same.

To fix this I'd suggest adding an extra control bone to the mixamo armature named after one of the bvh bones and constrain two of the spine bones (the dupilicate and another) to move based on its rotation. A picture of the two armatures would make this easier to explain.

You may want to check that the bone rolls on each bone in edit mode match between the two armatures.

So I've solved my problem in a way, but I'll leave it here in case anyone runs into a similar issue.

Instead of exporting from Pro-Body as a bvh, I exported as an fbx. Blender couldn't open the fbx, so I used Autodesk's FBX converter (http://usa.autodesk.com/adsk/servlet/pc/item?siteID=123112&id=22694909) to convert that fbx to a collada file. From there I just imported that collada into blender and was able to apply the animation that came with it to my model and it was a very close fit to the original animation. I could make minor modifications from here in Blender and then export it to Unity as an fbx for use. I hope this helps if anyone comes across a similar issue.

However to answer my original question from the very beginning, you can apply an action to a model with more bones. Even that extra spine bone that had children didn't cause an issue as it just moved along with the other spine bones.

3
How to write a script to copy one key frame at the time from one armature to another?
0
Bone in wrong position when apply animation
1
Blender adding extra bone when exporting FBX causes problems with Unity & Mixamo