In Cycles, I'd like to create a misty torus. Create torus, Volume Scatter note into the Volume Material Output node. Done.

But I'd like to be able to adjust the density of the scatter with respect to surface proximity. So the closer the scatter effect gets to the surface of the object, the more transparent or "less dense' it becomes.

Any suggestions? I'd like this to be material-specific. I could do this in the compositor, but blurring introduces other problems.

An alternative solution to the 'pure' mathematical solution (https://blender.stackexchange.com/a/70340/29586) is to use the Point Density texture node to convert a circular mesh into a density as follows (using a mesh created from a BezierCircle) : 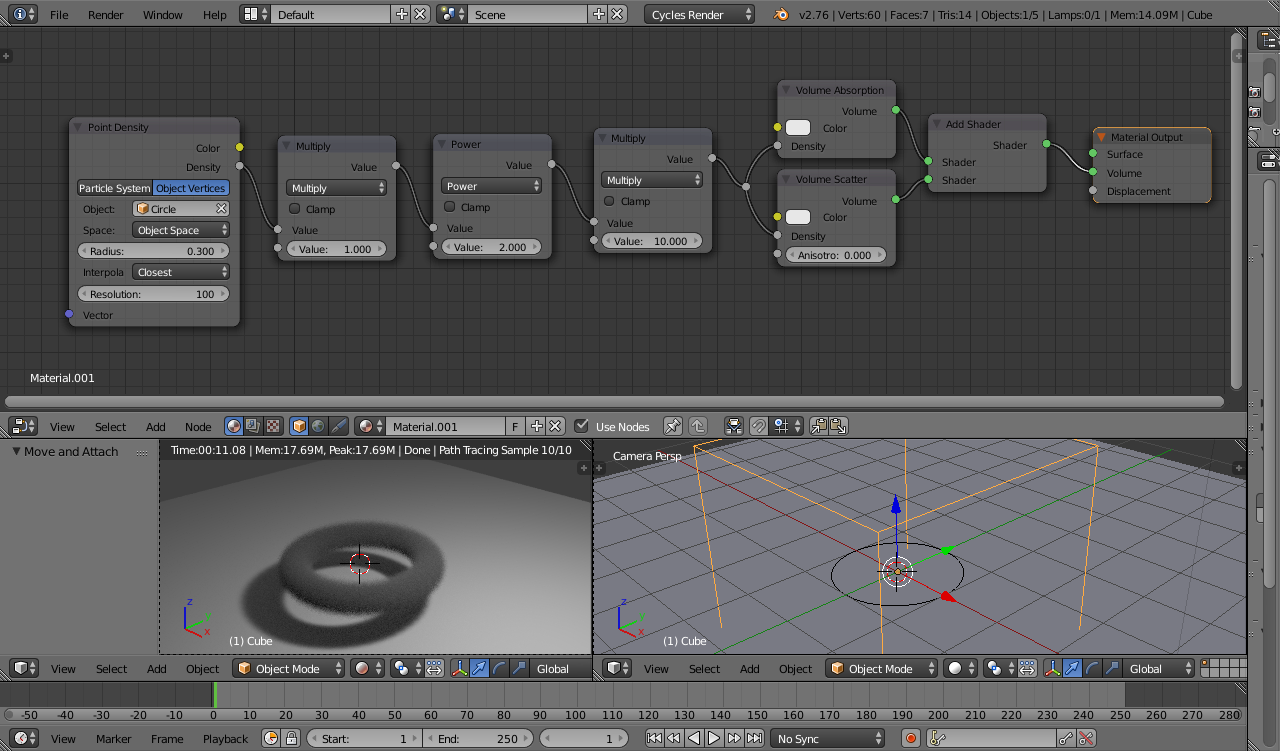 The Multiply and Power nodes can again be used to manipulate the scale and fuzziness of the generated torus.

This has the added advantage that you can manipulate the source mesh as desired : 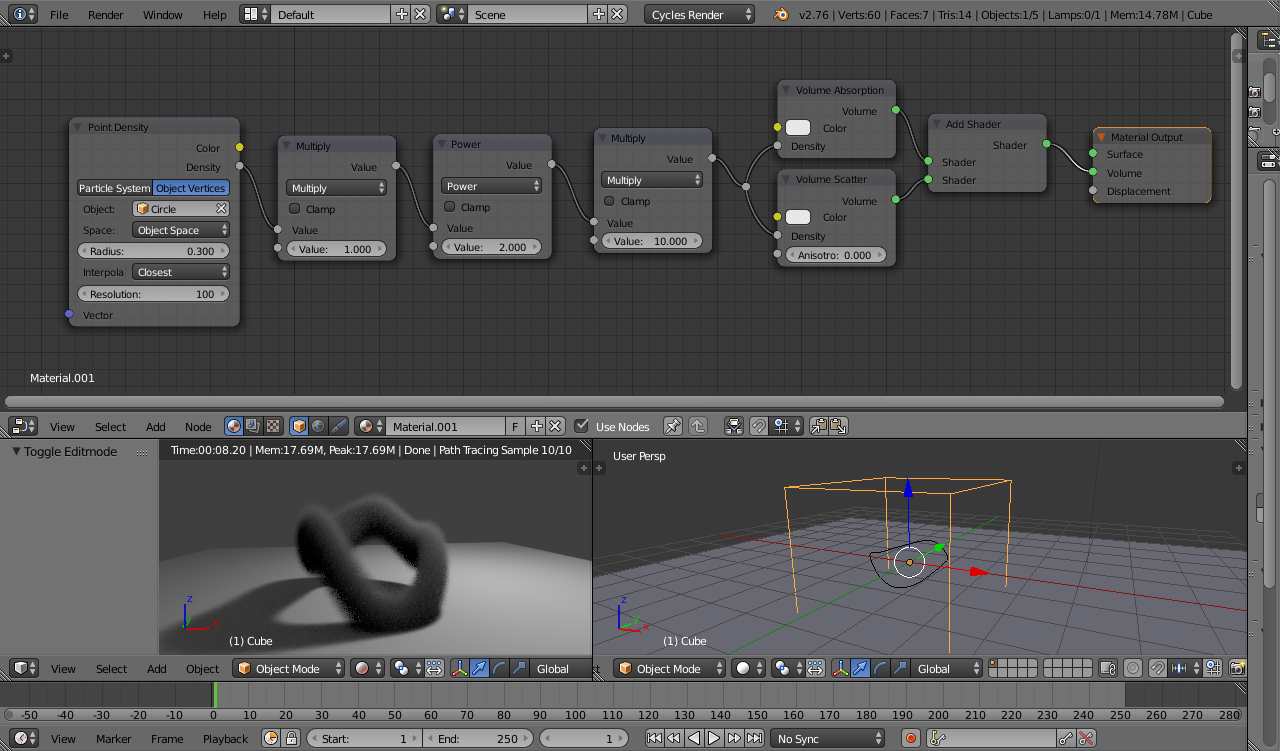 Note, this method may be less efficient than the pure mathematical approach described in the previous answer due to the use of the Point Density node. It will also be dependent on the number of vertices in the source mesh and the resolution of the Point Density (lower values will produce less accurate results). However, it is more versatile since the source mesh can be easily manipulated.

There seems to be an error in my calculations. I think I will manage to review them later.

As Ibalazscs pointed out, you can control volume with the existing math nodes and procedural textures.

I will setup a mathematic procedural torus to use as density. This will not be affected by the geometry, sadly, but will work as a substitute solution. 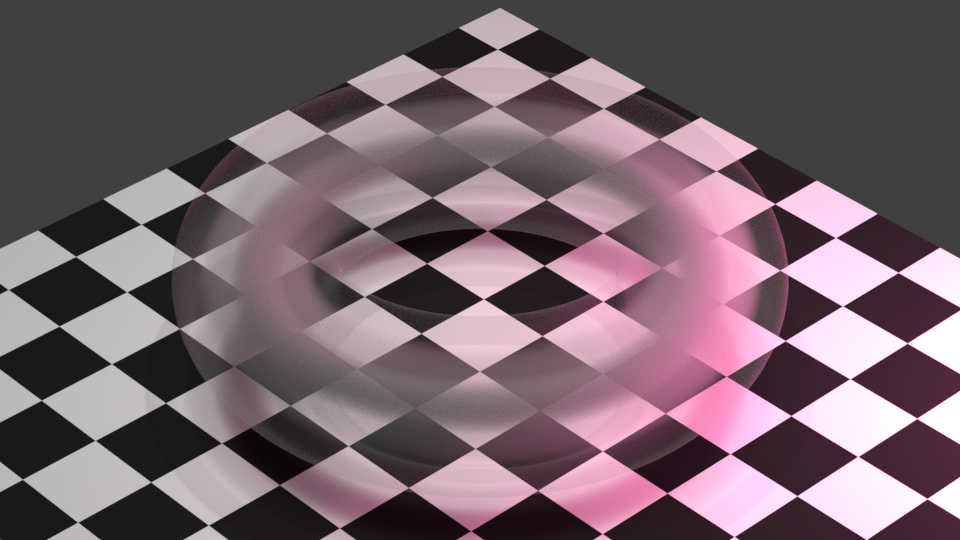 To control the density of a volume, we can connect a texture or other value node to the density input of the Volume Scatter Node.

Starting with a two dimensional equation, let's control the volume of a cylinder with a colorramp or RGBcurve. 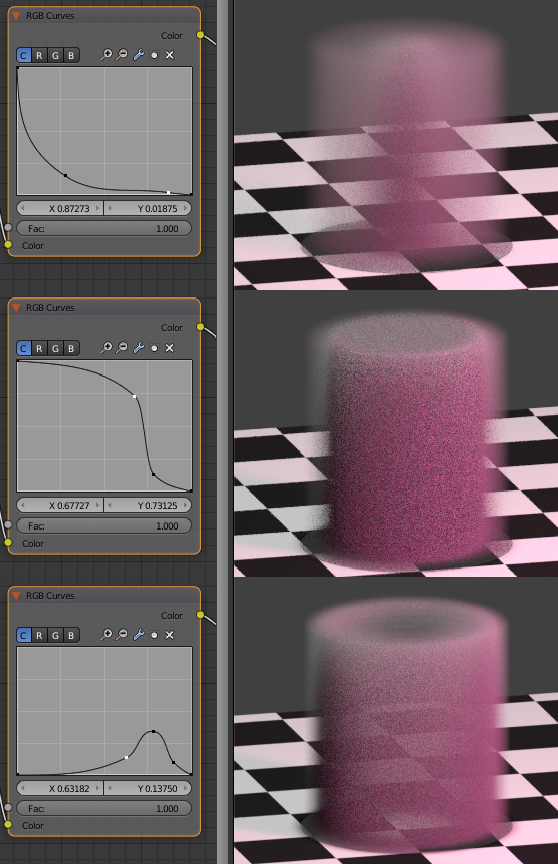 Here is the relatively simple mathematical basis. We need the equation of a circle. 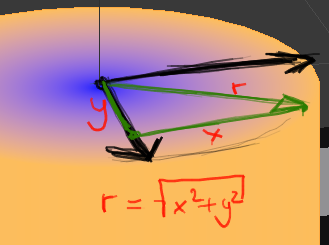 This will result in values from 0 to 1, starting from the center of the XY circle to any point on the circle.

Translated into a node setup, we have to use the Converter>Math nodes. 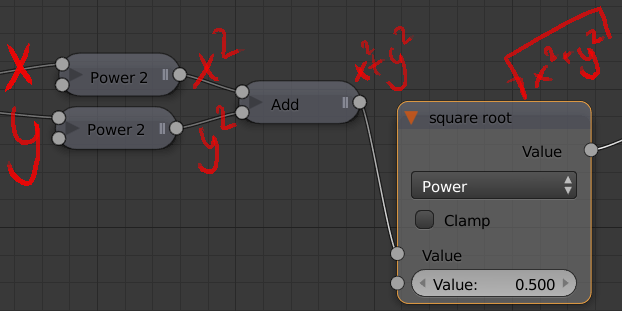 Connect the last node to a colorramp and we can see the effect on a 3D object in material or rendered mode.

I use a multiply node before the RGB curves to "scale" the circle. The RGB curves modify the density from the center of the circle to the rim. I have set them to the various examples in the beginning. The multiply node after the RGB curves raise the upper density limit. Close to zero (transparent) values will stay relatively unaffected, values close to 1 or higher will become more dense.
The position attribute of the Geometry node holds the XYZ coordinates. The separate RGB node extracts the three channels.
Important: The position attribute is in world coordinates. Use the Object Info > Location attribute if you move your object. 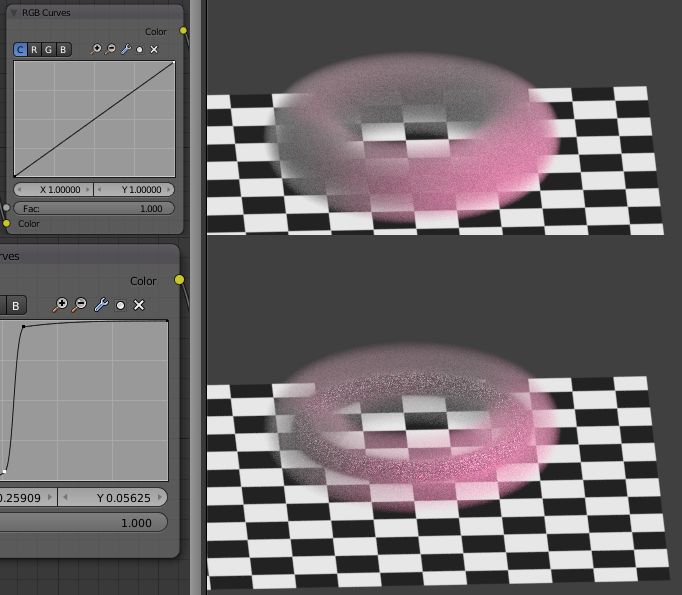 Make sure your domain object is large enough.
If you want to add a shader to the outer surface, add a torus with correspoing major and minor radius. In my case

Varying the density based on the proximity to the surface of the mesh is tricky - and requires use of complicated OSL shaders to probe out the nearby surface of the mesh. A much simpler method is to generate the torus mathematically as a procedural volumetric material. This means that we can more easily vary how the density of the torus varies as it moves away from the center.

Firstly, we need to create a volumetric material that varies based on distance. This can be achieved with the following material :

This takes the 'object' coordinates and feeds this into both sockets of a Dot Product vector math node. The Dot Product returns a scalar value based on the magnitudes and relative directions of the input vectors. By using the same vector for both inputs the node returns a value based purely on the distance of the vector (actually distance squared) - this returns a value base on the distance from (0,0,0) - ie, the distance from the center of the mesh. This is passed through a Multiply node to allow the final result to be scaled, subtracted from 1 (clamped) so the result varies from 1 at the center to 0 at its edge, passed through a Power node to allow the falloff to be varied (to make it either more sharp or more fuzzy) and, finally, a Mulltiply node to allow it to be made overall more or less dense. This is then used as the Density of both a Scatter and an Absorption shader node - which are then combined for the final material output.

By creating a mesh (eg, a cube) to act as a 'domain' for the material and varying the Multiply and Power nodes, this can produce an effect similar to the following : 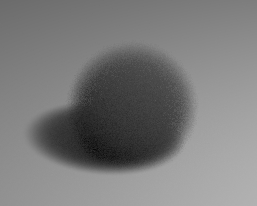 Small 'Power' (eg, 0.1) will produce a very sharp edge to the sphere while large values (eg, 10) will produce a more fuzzy edge. Reducing the first Multiply will increase the sphere's size while increasing it reduces its size.

To turn this into a Torus, we simply need to add some nodes to position the reference point (in the above case, this was the Origin) at various points along a circle - in particular, at the closest point along the circular path. The size of the circle will then dictate the size of the torus and the above Multiply and Power nodes will determine its fuzziness and thickness.

This can be achieved as shown below :

We then have the Multiply and Power nodes used to control the falloff of the edge of the torus as in the previous example (but fed from Value nodes and given appropriate names).

This can then produce the following result : 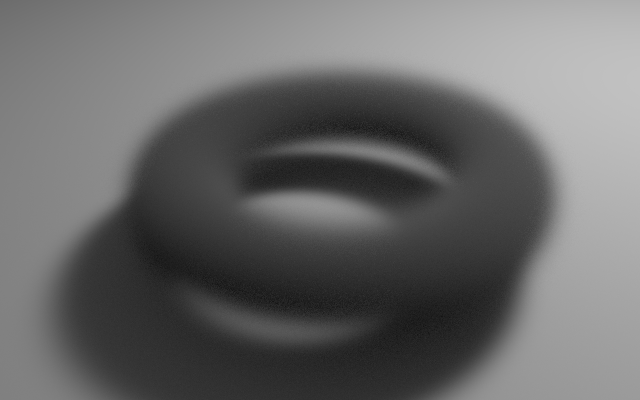 An absorption volume shader is automatically darker around the thicker areas, maybe all you need is to use it instead of scatter, like here: Volumetric gradient based on density?

To be physically correct, you need both of them, mixed with an Add Shader. If you really want to control the scatter density, then continue reading...

If a (slightly random) cloud-like appearance is OK, then see this question: Is there an easy way to make volumetric clouds for Cycles? (you would start with a torus instead of a cube)

If you need precision, you can start with this one: Controlling volume density

Here (in the second example) the density is based on the X location. Now for a torus, the math becomes somewhat more complicated: the density depends on the distance from the center, and on the Z location. I trust you that you can figure out the details :)

EDIT Just for fun, here are three torus-clouds (of type stratus, cirrus and cumulous) created with the cloud generator addon: 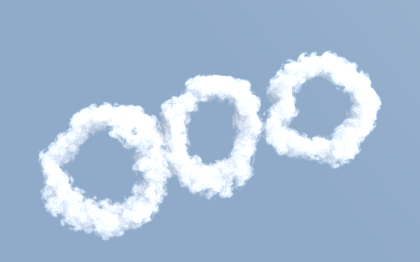 The cloud generator uses a particle system internally to set up the point density, so theoretically its source code could be modified so that the points are less randomly positioned.

Not the answer you're looking for? Browse other questions tagged nodes volumetrics or ask your own question.

15
Is there an easy way to make volumetric clouds for Cycles?
16
Distance from the surface as an input node for use with volumetric materials
8
Controlling volume density
4
Volumetric gradient based on density?
1
Trying to fake “God Rays”/ Stage Lights with materials

13
Is it possible to change the IOR inside a volume?
4
Apply a volumetric texture tangentially on a torus
6
Volumetric Spot Light with Cycles
16
Distance from the surface as an input node for use with volumetric materials
15
How to: Exponential Fall Off for Volume Density?
1
Volume scatter without rendering the volume object
6
Atmospheric fog in Blender 2.8
0
Rays emanating from a point on the surface