I know this is slightly larger scope than just Blender, but I know other Blender users have had this same problem. I've started using Sheep It and I really enjoy it. When I try getting points rendering on my own computer (and I have to use the .jar file because I use Linux Mint) the terminal outputs:

It still allows me to use my CPU but I could render at least twice as fast if it would recognize my GPU. I've done a little research on this and the only other guy who had this problem I could find was here: https://plus.google.com/112229882551127022642/posts/KL4QtHWHx92

And after some confusing discussion that I don't understand, Sheep It said:

The common thing between the not working system is the driver version. If you are on 331 it does work, if you are on 340 it doesn't. I have no idea why but it least I know what to look for. 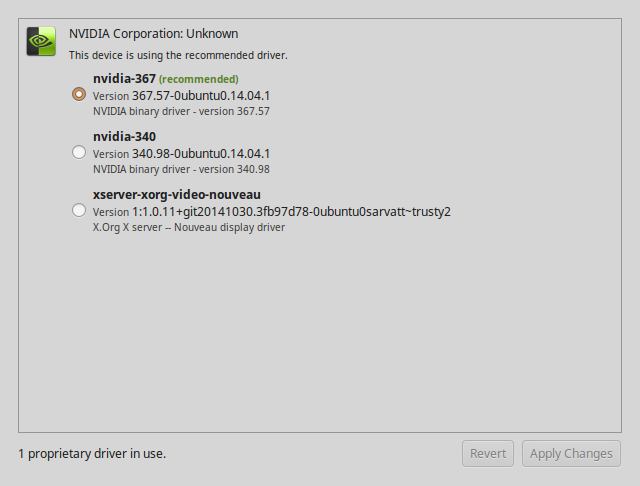 What are the implications of switching between drivers? If I wanted to, how could I also install nvidia-331? What does all the confusing stuff on that Google+ post mean and would that fix my problem? Most importantly, is there any way to get my current machine, without changing my drivers, to render for Sheep It on my GPU?

UPDATE: I tried all the Drivers in the Driver Manager and none of them fixed the problem. Also, running the jar command as root does not fix the problem either.

The easy(ish) answer is that Cuda isn't actually installed by default on every platform. Blender actually compiles in CUDA libs statically AFIK, but in other programs you will need to install the CUDA toolkit.

Additionally, you can actually install the version from the NVidia site, but it's a bit more compilcated:

Okay, I figured out the problem. I had to expand my terminal command from the simple jar file:

The first command tells me all the options and the second command allows me to render with my GPU.

Not the answer you're looking for? Browse other questions tagged drivers sheepit or ask your own question.

0
Error with Warning! Legacy WGL is unable to select between different OpenGL versions