In this video CynicatPro talks about the Specular Workflow that should be of interest especially for game developers. First he starts with constructing a custom Fresnel node (using the Physically-Based Fresnel node developed in an earlier video). 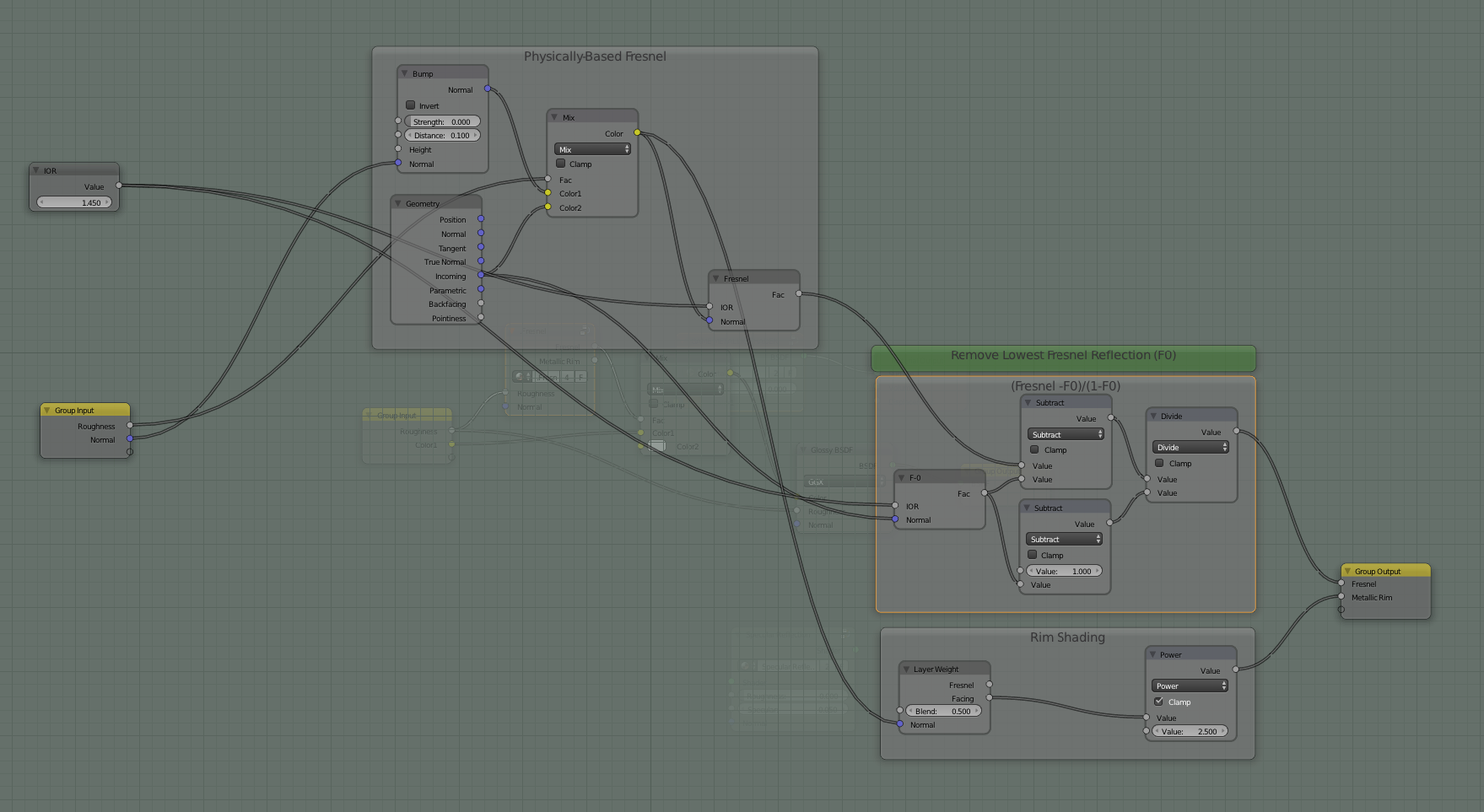 In this custom Fresnel node he includes a group of nodes to remove the lowest fresnel reflection (F0). Why is it so important to remove this lowest reflection ? I mean why is this relevant especially for game developers ?

Secondly, this Metallic Rim ... is this because metallic rim can have a color different from the normal reflection ?

Basically I want to understand WHY he first creates a Physically-Based Fresnel node and then sort of "destroys" this Fresnel node to have the advantages of a specular slider.

Also why is this Specular Workflow especially important for game developers ? What would be the relevance for other artists ?

EDIT: I think it is not very clear what my question is about. I think I understand why CynicatPro makes this custom Fresnel node. He wants to have the full specular range from black to white. Therefore he wants to remove the lowest reflections at F0. I get that. But now - in my eyes it is not a physically-based fresnel node anymore. So my question is why would you want that ? And why would this be important for game developers and not for other artists ?

What is specular workflow for game developers?

A workflow in a game engine determines what kind of textures you need. In the specular workflow you need a "specular texture", which controls the color and strength of specular reflections. See for example this Unity documentation.

How is this relevant for Cycles users?

3D painting tools (like Substance Painter) can export specular textures, and one might want to use these textures in Cycles. Another usage is that this way you can control the reflectivity with some procedural noise, simulating dust, scratches, rust, dirt etc. (If you simply use the "physically correct" Fresnel to control reflectivity, you lose the ability to manually control it).

Why is it so important to remove this lowest reflection?

It is removed so that later the reflection can be fully controlled with the specular map. The original Fresnel group always has some F0, while we want zero F0 for a black specular texture.

Can a metallic rim have a color different from the normal reflection?

In this paper the metallic rim is more or less a brightened version of the base color, however in the video CynicatPro already did a brightening when he mixed with white in the Fresnel effect. Physically the metallic rim is also part of Fresnel (it occurs because the red, green, blue components of light have different Fresnel curves).

Are there good alternatives?

Yes, for example here there is a PBR shader that uses a "metallic" workflow, and soon Cycles should have a built-in "Disney shader", also with metallic control. (There are already builds with this feature on http://graphicall.org/)

Where can I learn more?

Andrew "Blender Guru" Price also has some video tutorials about PBR materials where he explains CynicatPro's nodes, maybe it is more understandable for you.

15
What does the Cycles Fresnel Node do?
3
Setting all default_values of nodes to 0 does not result in expected black output
16
How the Fresnel effect works and how to construct Physically-Based shaders in Blender?
23
Custom fresnel curve
21
What do the settings in the new Principled Shader actually do?
1
Baking Textures? What can't I do?
0
How do I create this material in cycles (2.79)?
2
Does fresnel node corresponds to fresnel-equations?
0
Is Principled BSDF suitable for metals in terms of Fresnel?