how do i achieve this simple text animation?

here's this simple text animation in this video that i'd like to replicate but what a surprise i haven't got a clue how to do it and i was hoping someone out there could help a noob out.

Here's the video and the animation is at 0:20: https://www.youtube.com/watch?v=2-6Xz4tWigM

I've tried importing a flat black colour image into the VSE and keyframing the Y axis scale but the black box then appears to be growing form the centre rather than the bottom of itslef (if that makes sense).

And even then i don't know how to add my own font in the VSE, i think i could type my text in the default section of blender but have yet to try.

But my next problem has been how to make the text rise from the bottom of the black box from it's centre.

Apologies if this is a daft question and for the poor explanation its a lot easier if you see the animation at 0:20 of the video.

Cheers for any help!

Here's my Blend file that i'm working from, hopefully that'll help. Thanks!

A problem I can see with trying to do this in the VSE is coping with the text itself. It will be seen rising between the bottom edge of the video and the black box.

Doing this in Blender's 3D window/workspace would be a straight forward job with no problems. To use it again and again, simply edit the text and re-render.

Pretty much all of the elements and where they're needed have been placed into the 3D set/stage and placarded. 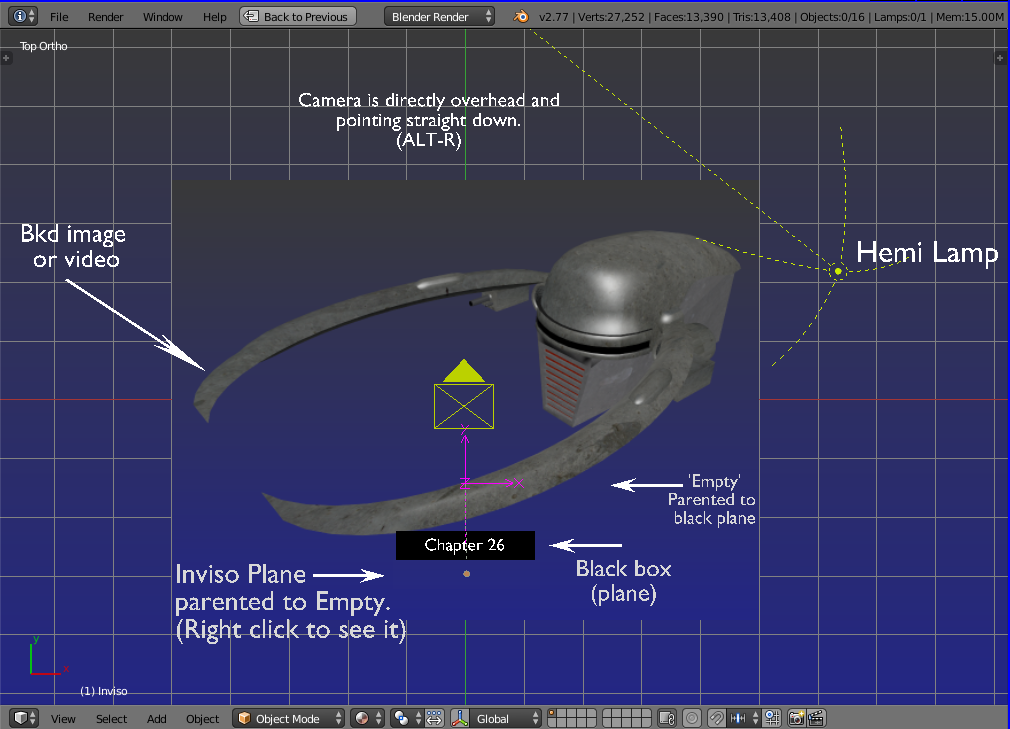 All settings needed to produce your overlay video have been preset prior to uploading. All you need to do is assign your own output folder and path for the output video/image sequence. DON'T RENDER BEFORE YOU DO THIS! You could end up with umpteen dozen files sitting somewhere!

To view the animation properly, get yourself into the camera view first, (numpad's Zero key) and then press CTL-A to set it going. (Don't blink)

As you're already overlaying a background video with text, we'll stick to that plan here and output the result using the "OpenGL" animation render, (top left of 3D window, under "Render")

All settings as setup in the Blend file should work straight off, except for the output folder and your own background video.

In the rendering properties panel at extreme right, set the "Shading" tab to "Transparent". The Post processing tab's boxes should be unticked for safety until actually using the VSE.

The output folder should be set to one created for this job because there's going to be a host of single-frame files. You don't want extras in there, causing mayhem!

Set the ouput format to "PNG" and make sure to press the RGBA button at hard right. You won't have a transparent overlay video otherwise.

What should end up being produced is a sequence of alpha layered video frames in the form of PNG files, ready to import as an "Image Sequence" in a seperate instance of Blender, and it's VSE. This time the "Sequencer" box should be ticked in the "Post Processing" tab. This is normally the default anyway on a newly fired up instance of Blender.

Explanatory - Have a look at the Blender file to see that I've simply laid text, mask, and solid black plane flat near the 'ground', the camera directly overhead and looking down.

If desired it can slide down to be concealed again, or using the same video sequence but within an additional strip in the VSE, the video can be reversed with that button in the strip's properties. (Press N)

As far as dispensing with the text and black box, you're only limited by your imagination. A simple fade in the VSE would do!

'Inviso mask' - This is a term I've adopted for the effect we get in Blender when rendering using OpenGL and giving a 2D plane a material slot with Transparency set to 0.008, Specular set to zero.

When the effect is active, objects and parts thereof that end up behind the mask can be -->selectively<-- rendered invisible. This is most useful for a variety of applications.

One example - https://i.stack.imgur.com/mP991.jpg The smaller cube whilst physically in front of the image can be placed behind some item within the photo by using an Inviso mask fashioned to match the exact shape of that item, such as the tree trunk above.

This uses inviso masks to hide the outer portions of the 'open parchment'. A detailed explanation is here -

Reduce Curve Deformation (scroll down to the post describing a simple 'Parchment Scroll' opening and closing)...

If you find the mask not working on your hardware, go to the black box/plane's (not the mask) material panel, open it's shading tab, and tick the "Shadeless" box, just for a second or so, untick it again. For some reason Blender needs a slight kick, get it talking to the graphics card(?).

Run it again and it should be ok

Using any image app you like, create an image with the text using any font and add the image to the VSE. Save it using a format like PNG that supports alpha if you want any transparency around the text.

In the strip properties (press N) set the blend type to Alpha Over so that it doesn't obscure the entire video. Under Strip input you can use the image offset to position the text, this can also be animated by adding keyframes. Go to frame 1 and set Y to -20 then right click and select Insert Keyframe, go to frame 50 and change Y to 50 and right click and select Insert Keyframe.

You can also create and animate a text object in blender and render the text image if you wanted. For fancier text animation you may find Animation Nodes interesting.

Not the answer you're looking for? Browse other questions tagged animation video-sequence-editor image masking or ask your own question.

0
Reduce Curve Deformation
0
Is there a Blender alternative to Chroma Key rendering in OpenGL?
1
text renders in black when it's red in 3d view, why?

8
Simple Masking/Stencil in the VSE
0
Animation - Falling object one after the other
3
VSE: Use png images in one channel as alpha mask for another channel
4
How can I fix animated text to stay inside the 'LCD screen'?
1
Rigid Body Object Jumps back when keyframing “animation” off
11
Text-to-Object Animation
2
How to crop from Top & Bottom of Video