Can Someone explain to me what the bone driver properties do?

I asked this question yesterday, but the person who answered told me to ask the question with more details. Could someone tell me what each thing does here so I know how to use bone drivers? 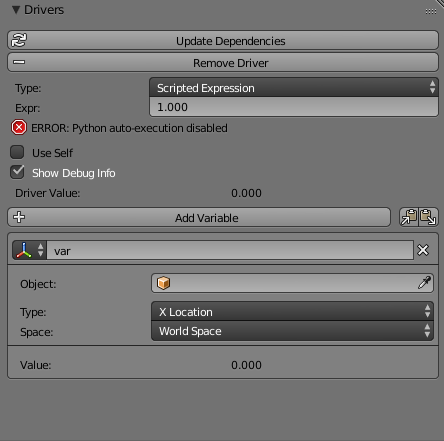 Let's say I have a cube and a sphere in my scene. I want my cube to move 2 units in the x direction when my sphere is moved 1 unit in the y direction.

Now that I have the y location of my sphere as "var," I can use that variable under "Scripted Expression" to write a Pythonic script the value of which will be assigned to the x location of my cube. Since I want to move 2 units in x direction for each 1 unit in y direction of the sphere, my expression should be 2*var.

Now when you move the sphere by "var" in the y direction, the cube will automatically move "2*var" in the x direction.

You can add more variables to write complicated expressions. As long as it is syntactically Pythonic, it should work.

Not the answer you're looking for? Browse other questions tagged rigging bones drivers shape-keys or ask your own question.

4
Can I influence the bone envelopes?
6
What does “Bone location is set in local space” mean?
1
HELP: Mesh Gaps & Bone Properties
0
How to get a list of Drivers used in certain bone
2
how to check what shape key connected to bone?
3
Linux Sheep It Client Doesn't Recognize Nvidia GPU
3
How to use “self” in a driver expression to refer to transforms of a bone in the parent armature?
0
Set Driver Target Object from the Console
0
How do you convert an expression that works in the console into a format a driver can make use of?