I have an object with an animation. Everything works fine but at one point the object does a "jump" but the position is not changing. (only one frame) I mean it moves in the 3D space but the location of the object doesn't change. I really don't know why.

I tried to change the position in this frame so that the object is on its right position again. But if I do so then all the other movement of the object is changing even if I put the keyframe only in the one frame.

In both pictures the location (red square) is the same (exactly).

Why did the object move, and how can I prevent it from moving?

EDIT: Here is the Blend-file

There's a ClampTo constraint on the object jumping there around and this constraint has its Influence option keyframed to become 0 at that frame:

Thus at that frame the constraint stops influence the object and it changes its position. You can edit keyframes' values or delete them to avoid jumping.

Also note that location of the object by X axis which is also keyframed has quite rough animation curve: 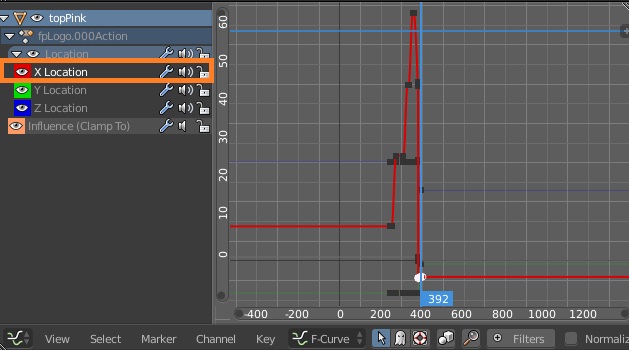 You might need to change the curve to make that moment correlate with the rest of the animation.

4
Location of an object at a specific frame
3
animation: edit the way an object moves by grabbing the pose in the curve editor or graph editor
1
object animation / keyframe moving wrong object?
4
How to ease grease pencil animations between different keyframes
0
Camera follows path, but is not looking the direction I want
3
How do I animate the texture mapping location in the node editor?
4
How to get frame-by-frame object location in Blender 2.8+
0
Is it possible to make a change that affects the whole animation but keeps the original animation relative to the change? (like 3ds Max)