I made a model (of a fish) using x-axis mirroring. Some vertices sit on the x=0 plane. I extended a selection of vertices on the mirror plane to make the back fin of the fish (see image). Now I want to give the fin a little more thickness by pulling the fin vertices out of the mirror plane. However, Blender doesn't let me move these vertices (e.g. the one selected in the image) along the x-axis. I disables clipping in the mirror modifier, even deleted the mirror modifier alltogether but still, when I hit 'G' for translate, and then 'X' to limit translation to the x-axis, the vertex doesn't move. (movement along other axes works, and other vertices of the model that are not on the mirror plane move just fine).

What else besides deactivating the mirror modifier do I have to do to release the locked x-axis translation? 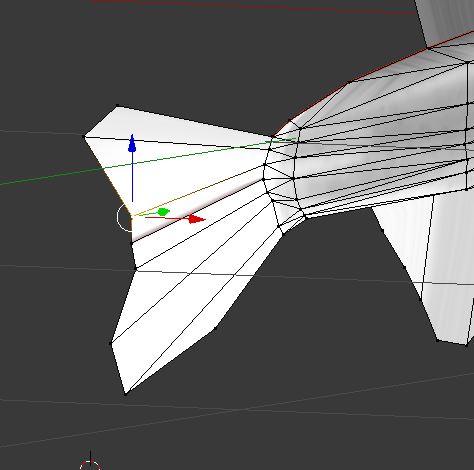 In Edit Mode. Press T to bring up Tools Menu on the left hand side. Click on 'Option' tab and see if X-Mirror is check. Simply uncheck it.

For anyone searching this question in the future: If you have a mirror modifier on object that is stuck on 1 or 2 axes then uncheck clipping in mirror modifier, move it how you want to and check it back again. It sometimes wont let you move some parts of the model because they are merged with mirrored side. Hope this ever helps someone. As far as i know this applies to all blender versions including 2.8 because this is not a bug but just the nature of mirror modifier.

Not the answer you're looking for? Browse other questions tagged modeling interface mirror or ask your own question.

7
Excluding part of the mesh from mirror modifier

3
Why am I unable to extrude/translate along the Z-Axis?
1
Armature X-axis mirror not weighting correctly
1
Mirrored mesh splits when manipulating bones
0
My car's topology is messing up as soon as I attempt to move a group of vertices along the y-axis
2
Vertices in edit mode being mirrored WITHOUT mirror modifier
0
About anvil modelling problem caused by mirror modifier
1
Move and extrude axis locked?
1
How can I align vertices to an axis?