Orienting a Camera to Match a Photo to a Scene

For a couple of years now, I've been playing with trying to create scenes from photos (I've found very few references on this; if you know of any, please let me know). I've run into an odd problem, though, with some photos of the 1904 Worlds Fair: I can't come up with any camera orientation or position that matches the photo to the supposed positions of objects in the scene.

The blend file at the link below demonstrates the problem. Here's a screenshot: 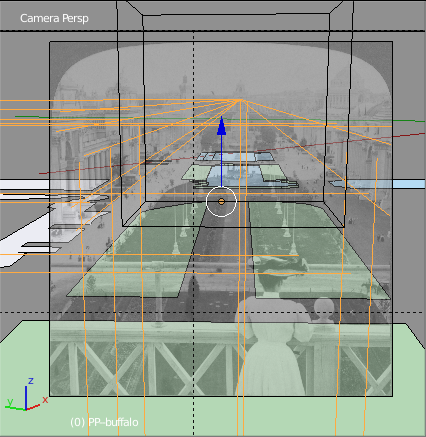 The camera contains the highlighted mesh as a child. The mesh represents the image plane and contains the vanishing lines, which I use to orient the camera. The mesh also has an image "empty" as a child, which contains the reference photo. The photo is from the wireless tower's 100-foot platform.

The colored polygons represent ground features, traced from this map (look for "Plaza of Orleans" on the left side):

I'm wondering if there may be some distortion in the photo. But the lines all look straight, and the sphere on the railing looks circular, so it would have to be a distortion that doesn't affect these.

So, if anyone can figure out an alignment that works (and preserves the vanishing points), or knows of some possible distortion in the photo that's preventing it, I'd appreciate any help.

[Update 1] I installed BLAM and gave it a try. The angles were similar to what I was getting. Things still wouldn't align. Of course, this isn't the best subject for vanishing point based analysis - there just aren't many long parallel features.

I would consider the map being in error, but I compared it with satellite images (using what few artifacts are left from the fair), and it appears to be pretty accurate overall.

Is there any sort of photographic distortion that would only affect the depth? I can't conceive of one, but I'm no optics expert.

Browse other questions tagged modeling camera image or ask your own question.

4
still frame camera solve
3
How do I align my grid to background footage?

2
Poor focus in Cycles render
8
Points only camera calibration?
0
Shape of object changes when camera moves?
0
UV Unwrapped Blender texture image is either rotated or stretched, cannot get it to be straight and not stretched