How does the Turbulence Force Field work?

I am doing a series of experiments with smoke & fire. I found a blend file that uses the Turbulence force field in a fire simulation. During the simulation the force field is moved along the Z-axis starting below the fire and ending above the fire. 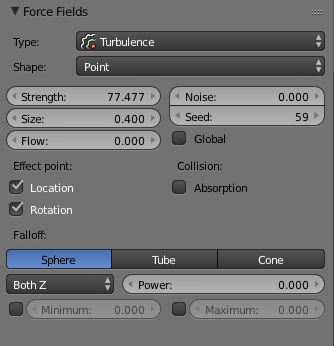 How does the turbulence force field work exactly and what is the impact of the various settings ? There is not much info in the manual and I cannot find adequate tutorials.

A force field is a vector field, meaning at every point in space it defines a vector based on some vector-valued function. In the case of a force field, the vectors represent forces pushing the particles around. In other words, at each frame the force field exerts a force on every particle dependant on the particle's position.

What differs between the different force fields is the vector function they are based on. For a turbulence field it uses some noise pattern (Perlin, I think), creating random "turbulent" particle movement. Most of the settings for the force field (the ones that change when you change the force field type) modify this noise pattern.

TL;DR: The turbulence force field pushes particles around based on their position in a 3D noise.

Here's a rough explanation of the key settings: