I wish to convert into "square-like" quads the ceiling of the Sponza Palace mesh (from the original by Marko Dabrovic, converted to OBJ and available at the McGuire repository).

The mesh of the ceiling is mostly quads already (in theory it should be all-quads, but I guess there was some topology problem when converting to OBJ, and this created a non-manifold mesh with some triangles at the base of the arches). The file available at the above link already has these problems, I didn't find a version without these problems, supposing there was one.

I'm no expert at Blender mesh editing. I tried to subdivide the faces, but the resulting quads, although smaller, kept the original aspect ratio. I wish to subdivide the longer edges only, so that the subdivided rectangles tend to convert into square-shaped.

So my next try was to use the "select larger" tool after selecting an edge that I wished to subdivide. It helped, but undesired faces appeared in some edges, and I couldn't progress more than one subdivision.

Do you think of some procedure I could follow? I don't really need perfect squares, I just wish quads with the longest side not longer than twice or thrice the shortest side, for example.

Also, I don't need that all quads have the same size. So, it would suffice if I could just subdivide the horizontal edges four times, for example. This would create some too large quads, and some too small ones, but it would suffice for my purposes.

If it helps, here's an image of the Sponza ceiling. Yes, what you see are quads (with some triangles at the bases -see the ugly diagonals at the bottom of some arches-, as said above): 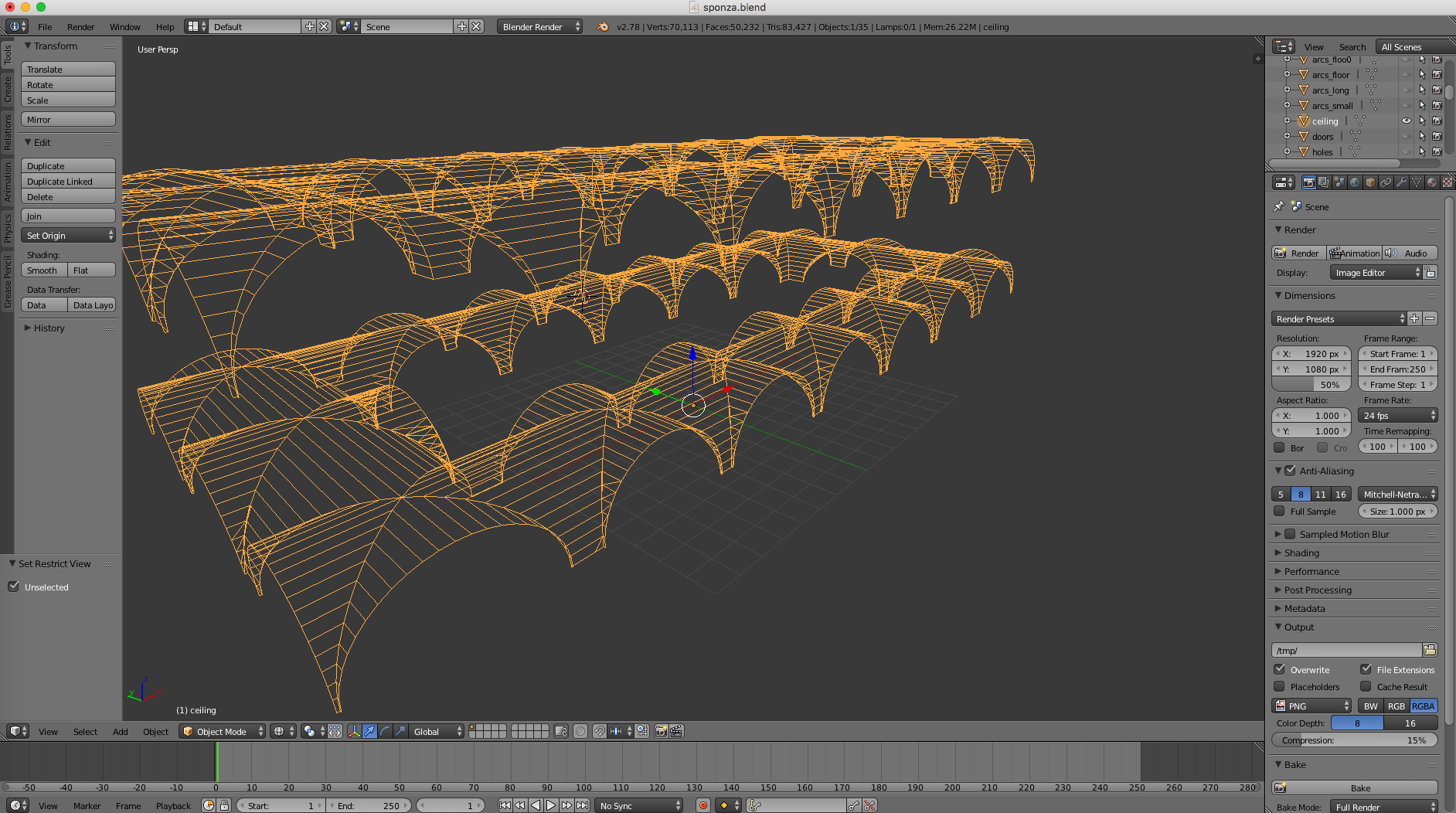 I would just go edit mode and do some manual cuts... it is enough to fix just a quarter of the mesh, then use a mirror modifier with X and Y axis enabled to recreate the ceiling.

You have a couple of options to do the cuts:
1. K key is the knife tool, it got some useful extra keys, E to make multiple cuts, C to constraint, Ctrl to snap to to midpoint, SpaceBar to apply... do it from top view
2. J key is vertex connect path, just select endpoints of the arc and press J

2
Beginner question: Increasing poly density for a single side of a cube
0
some kind of dynamic and localized subdivision surface modifier - type algorithm?
3
How to do away with facets in render?
1
Should I convert my quad mesh to triangles? If so, can I do it in this script?
1
Unable to merge two objects
1
Converting Bezier shape into mesh with nicer topology
0
Highlighting square faces