How to access node tree of a selected node group in python? 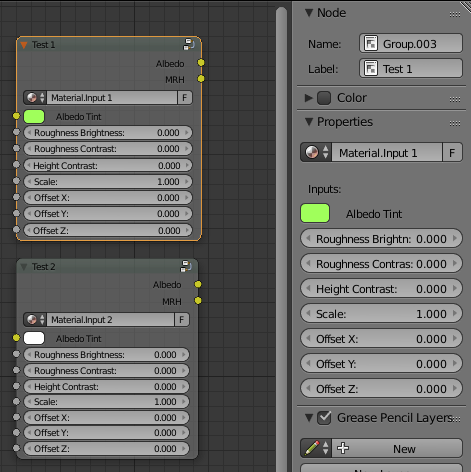 I have these two node group instances "Test 1" and "Test 2" containing image textures. Now I would like to modify nodes inside of a selected node group in python.

To access the nodes inside a node group I have to know the name of the node group (e.g. "Material.Input 1" for node group "Test 1"):

First off, to get the currently active node, you can use

from within an addon / Operator (which I suppose you're doing, otherwise there would be no bpy.context.selected_nodes). From the Python Console, getting the currently active node in the compositing tree would be

From there, you can use

to retrieve the tree this node lives in. This also works in Material Node Trees. To retrieve the materials (remember it could theoretical be more than one material using the same node tree) you can to:

So in your example:

Edit: Find the node tree of a group

After the question has been rephrased, this solution would be smarter: Node groups simply have an own Node Tree themselves. You can think of it like:

So in your case:

0
How to call -- in Python -- a compositor node inside a compositor node?
1
Python: get nodes INSIDE custom node-groups
1
How to trigger LMB click events to activate a specific View node and update contents of 'Viewer Node' image data block using Python?

2
Getting the image of a texture node that feeds into a node group
6
PointerProperty to node of material node tree
0
Ungrouping a node group with Python
1
How to link an existing node group via Python script
0
What is a python command to create a node group or shader node tree from the nodes in the currently active material?
0
Updating the texture image node using python