How do I make an animated mesh independent of a shrinkwrap modifier?

The title is probably very confusing, but here's the situation:

I'm animating a flat grid curve by shrink-wrapping it onto a moving plane in order to get a uniform wave animation, it looks like this:

Before I render it, i want a bevel. What I did then was simply adding a bevel to the curve, making the curve look like this: 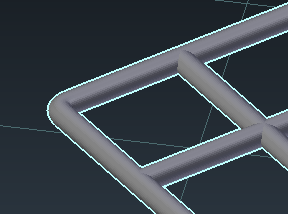 Now, when activating the shrinkwrap modifier, I expexted that only the curve would be shrinkwrapped, but alas, the bevel did the same:

As seen by the blue spots, the curve has been completely flattened along with the bevel.

How can I avoid this? I tried using a wave modifier instead of shrinkwrap, but this modifier doesn't seem to make perfectly round waves like this:

So, any thoughs on how to solve this?

0
Shrinkwrap addon conflicting with curve bevel
7
How to bake softbody animation into keyframes?

0
How to bend and use on mesh (as shrink wrap)
0
Can you animate a beveled spiral curve into a tapered version with even thickness?
0
How do I copy the shape of one object to another?
0
Simulating electromagnetic wave polarization in Blender