Can Blender make a timelapse video?

I was wondering if there is a script or addon that allows me to make timelapse videos of my blender projects?

For example, is it possible to add a camera to the scene which takes a quick image of the scene from that point of view every couple of seconds or moves?

The built-in Screencast tool is configurable such that you only get one frame every few seconds... or minutes.

The default settings will generate a screencast consisting of a series of PNG images captured every 50 ms... The FPS for video Screencasts and time between each Screenshot for an image series Screencast can be set from the System panel of the User Preferences window.

If you're wanting a fixed-position shot of the current state of your model, though, this won't work. It'll just take a screenshot of whatever your Blender screen looks like at that moment.

You can set Frame Step to skip frames by every certain number. e.g.: If you want a 2x timelapse, then set the number to 2. 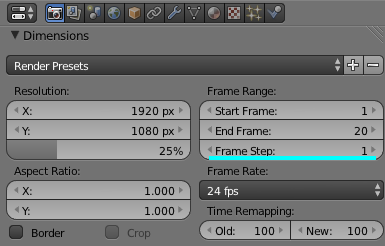 You can also make it by tweaking the Time Remapping option, as shown in the same image. For example, Old=100 and New=50 for a 2x timelapse, However, you should also set the new End Frame by half, in order to offset the total number of render frames, because it will be doubled actually if you don't do it in such case, so this is not so recommended, personally speaking.

Furthermore, you can also have the Frame rate doubled, but that's obviously not a nice way either.

2
BGE Video Textures not showing up in exported .app
0
I'm having trouble with image rotation
2
Color distortion when saving as video file
2
Need help rendering a panoramic equirectangular movie of a computer game recorded in box projection mode in cycles