Remove reflection of one object from another object?

I have a reflective object and I want it to reflect only light and not the surrounding objects.

I have moved it to Layer 2, but it still reflects the objects from layer 1. What should I do to prevent objects on Layer 1 from casting reflections on objects in Layer 2?

compositing-nodes layers render-layers
Share
Improve this question
edited May 7 '14 at 14:04

Set the renderlayer with the reflective object to Exclude layer one: 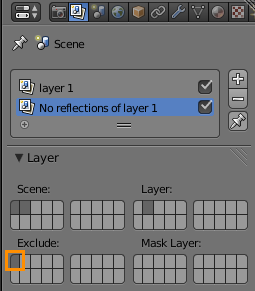 Now objects on layer 1 will not have any affect on layer 2.

In BI this is more complicated, because it appears to be impossible to separate reflections into separate layers with BI.

In other words, you can either reflect every object in the scene, or reflect nothing (no selective reflecting). You might be able to do something with the Material Index pass, but with even a simple scene it becomes complex quickly.

As a workaround, you can use multiple Scenes.

Not the answer you're looking for? Browse other questions tagged compositing-nodes layers render-layers or ask your own question.

7
How can I move an object on a separate layer behind another in the compositor?
1
Make object glossy, but not reflect other object's colors?
1
Cycles selective reflection

5
How to do a lightcast only Layer in Cycles?
3
Why is my Shadow Catcher layer shadow-pass entirely black?
1
Getting this weird halo in my reflection
4
Transition from one background to another as object moves in front of camera
2
How to get glare on a specific emission reflection
1
copy objects from one scene to another
1
Configuring an object to ignore one light source
0
Make objects reflect from separate view layer 2.8
0
Passes between render layers 2.8