For those of you who are not familiar with which part of the Enterprise is the Impulse Engines, it's the red parts:

The photo doesn't display it great, but it should help get the point across. The Impulse Engines are a multiple squat little hexagons separated by thin strips silverish, hull-colored strips. Each hexagon emits light and is a slightly different Saturation (think HSV color definition) of red. If this were a gif, you would see that the Saturation changes overtime for each hexagon, so it appears that they twinkle.

Seeing as I would love to not have to model each little hexagon and add a different material for each, I would love if someone could figure out a material that looks similar to these.

A .blend for you to play with:

This problem has been a really interesting one to work on. At the start I didn't think this would be possible with 'pure' Cycles nodes - without resorting to OSL - but was surprised to discover it is. I've certainly learned a lot along the way.

The pattern can be generated by measuring the distance of each point being sampled to each of a number of fixed reference points in a similar way to how the Voronoi texture is produced. By carefully positioning the reference points we can generate a hexagonal pattern. 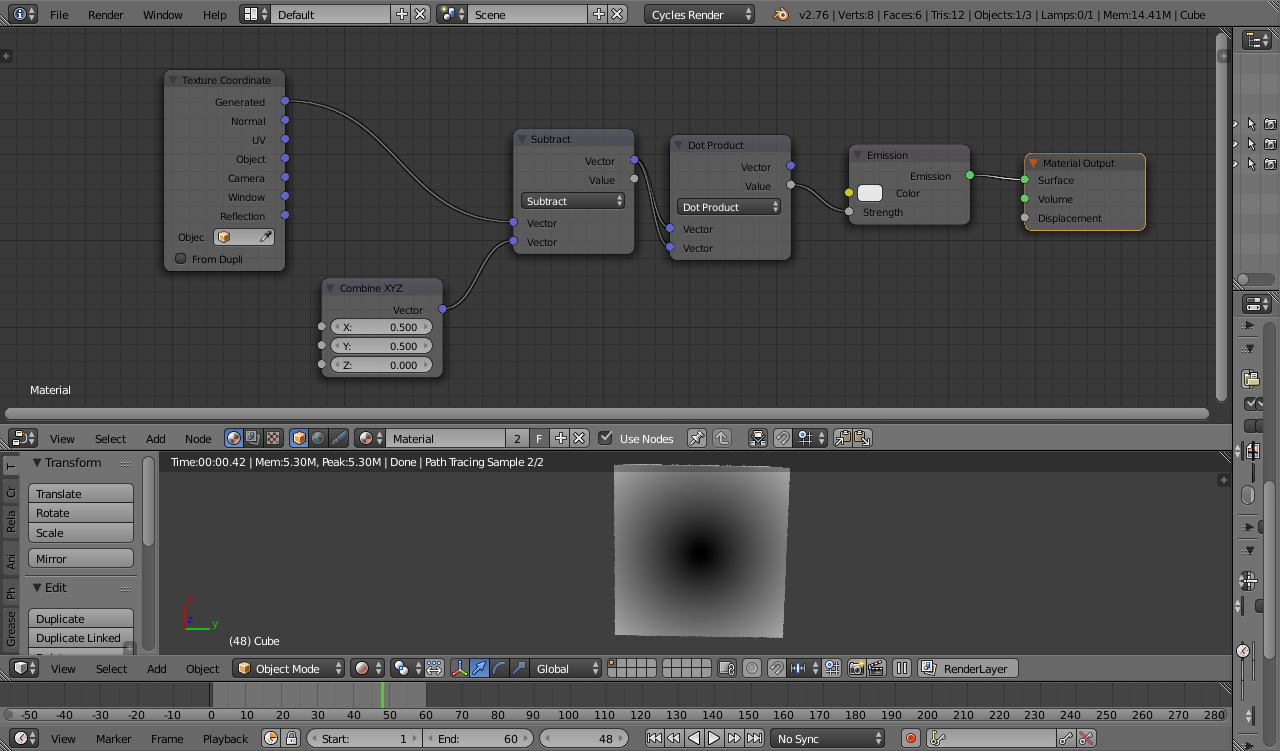 This structure can be replicated for multiple reference points and the results of each combined using a Minimum node. This will effectively return the distance (squared) to the closest reference point. 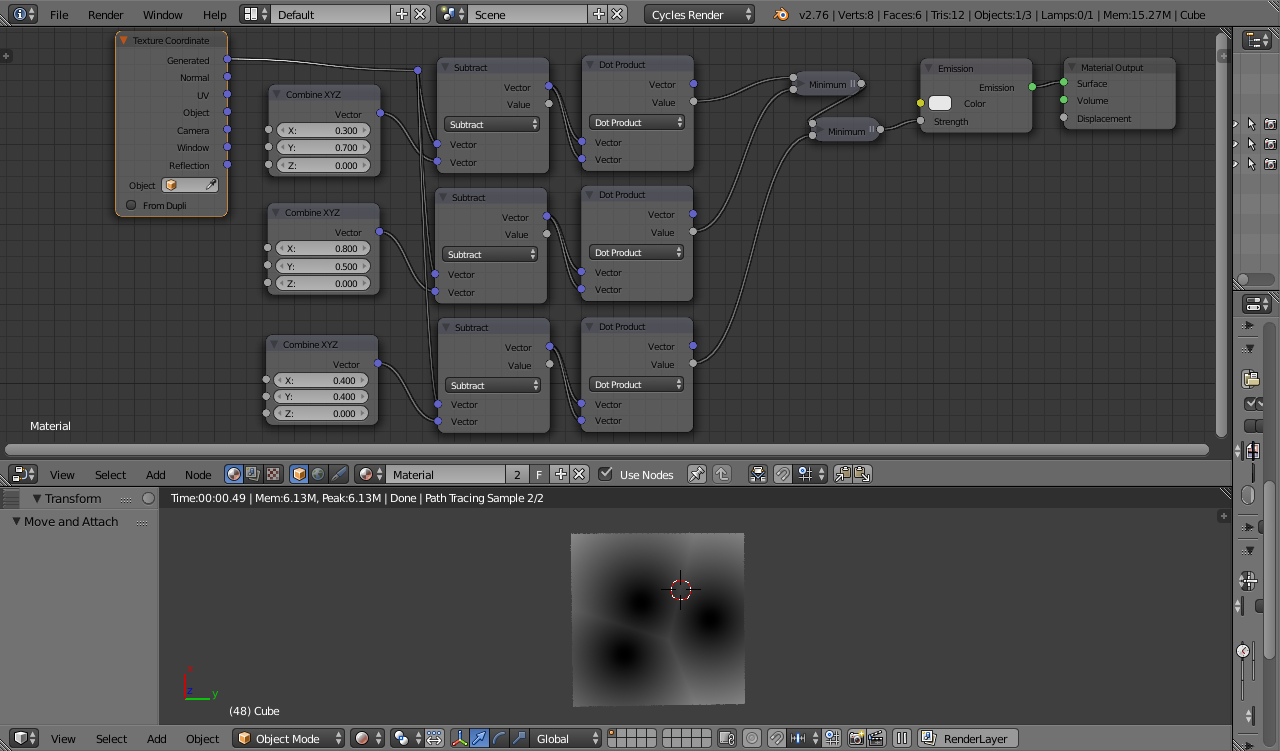 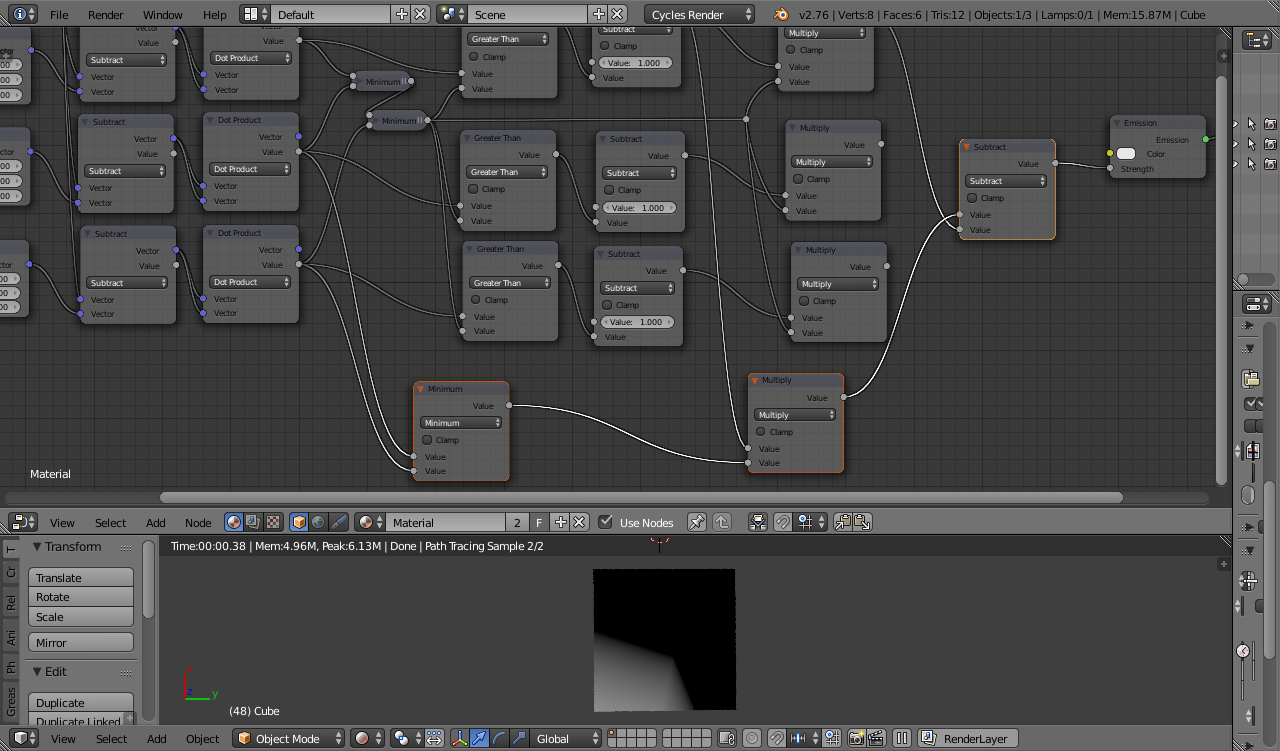 Note the multiplication by the mask - this is to ensure that each value is only used when the point being measured is closest to the corresponding reference point - the output will be zero outside the corresponding cell.

Replicate a similar structure for each of the other reference points - in each case this will need to combine the outputs from all reference point distances of the other reference points excluding the one corresponding to the 'current' one - which we know will be the actual minimum if the mask will include that point - ie, the first combines 2 and 3, the second 1 and 3, the third 1 and 2. Since each of the resultant outputs are masked to zero when the sample is outside its cell we can simply combine them all as shown : 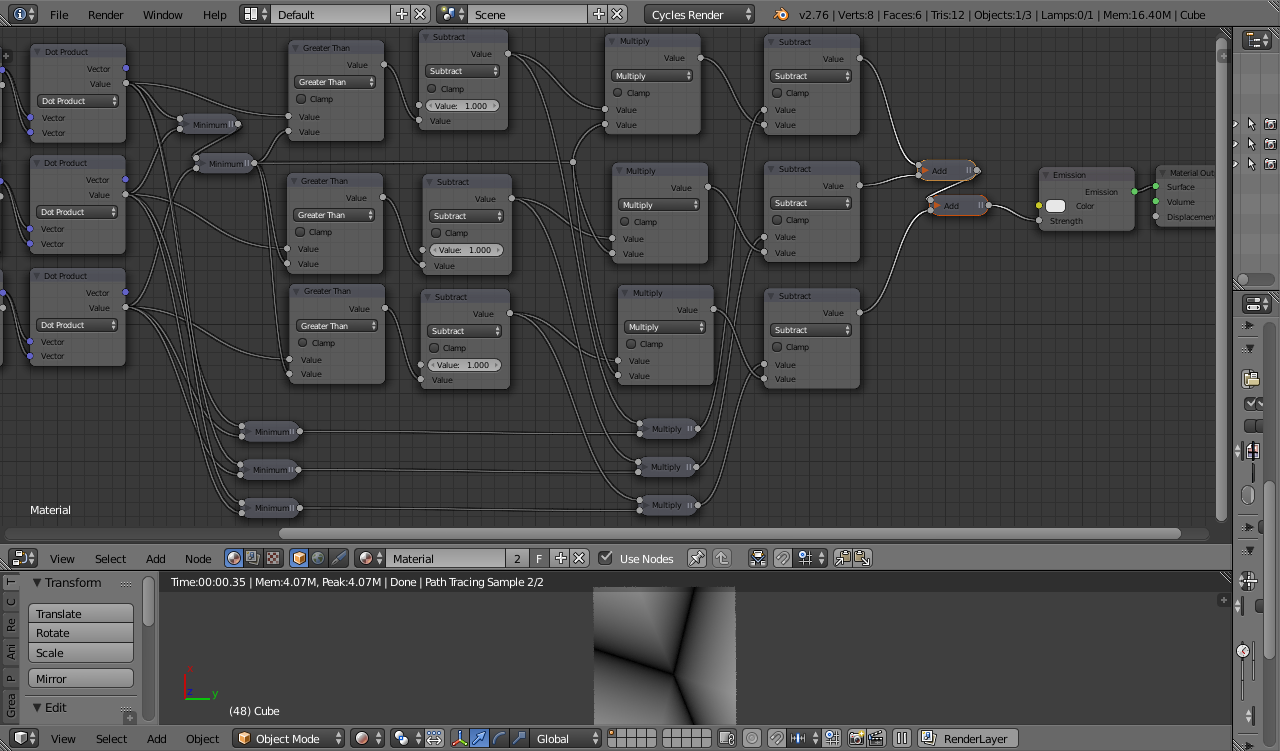 To be able to colour the individual cells we need to be able to determine the vector coordinates of the corresponding reference point. Again we can use the masks to pick out the relevant value for the closest reference and these can be simply combined to produce a single vector. In this case, the 'anti-mask' (set to 0 where that reference point is closest, otherwise 1) is most useful as it can be used in a Multiply Colour node to multiply the vector by zero when it is not the closest, otherwise allow the vector through unchanged. 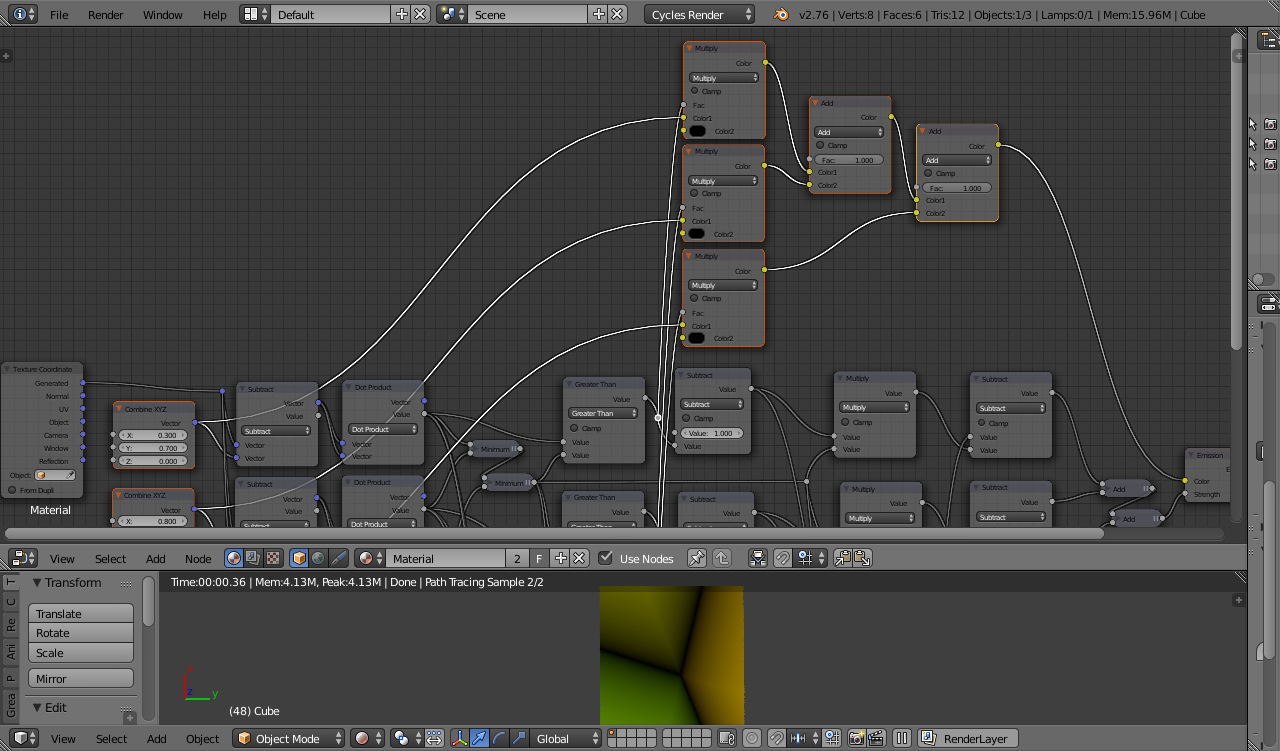 For a hexagonal pattern we need to position the reference points in a grid representing the centres of the cells. By calculating only those reference points that are closest to the point being sampled we can re-use the above nodes to cover the whole texture space. This would technically be possible with only 3 reference points but becomes much simpler if we replicate the node structures to work with 5 cells at a time.

To position the cells, the 'grid' coordinates are determined by dividing the texture coordinate by the horizontal and vertical pitches (chosen as 1.5 and 0.866 to generate the correct spacing for regular hexagons) and rounded down to integers. Modulo 2 is used (which returns '0' for even rows and '1' for odd rows) to determine the Row Type and Column Type to allow alternating rows to shift across in the hexagonal pattern. 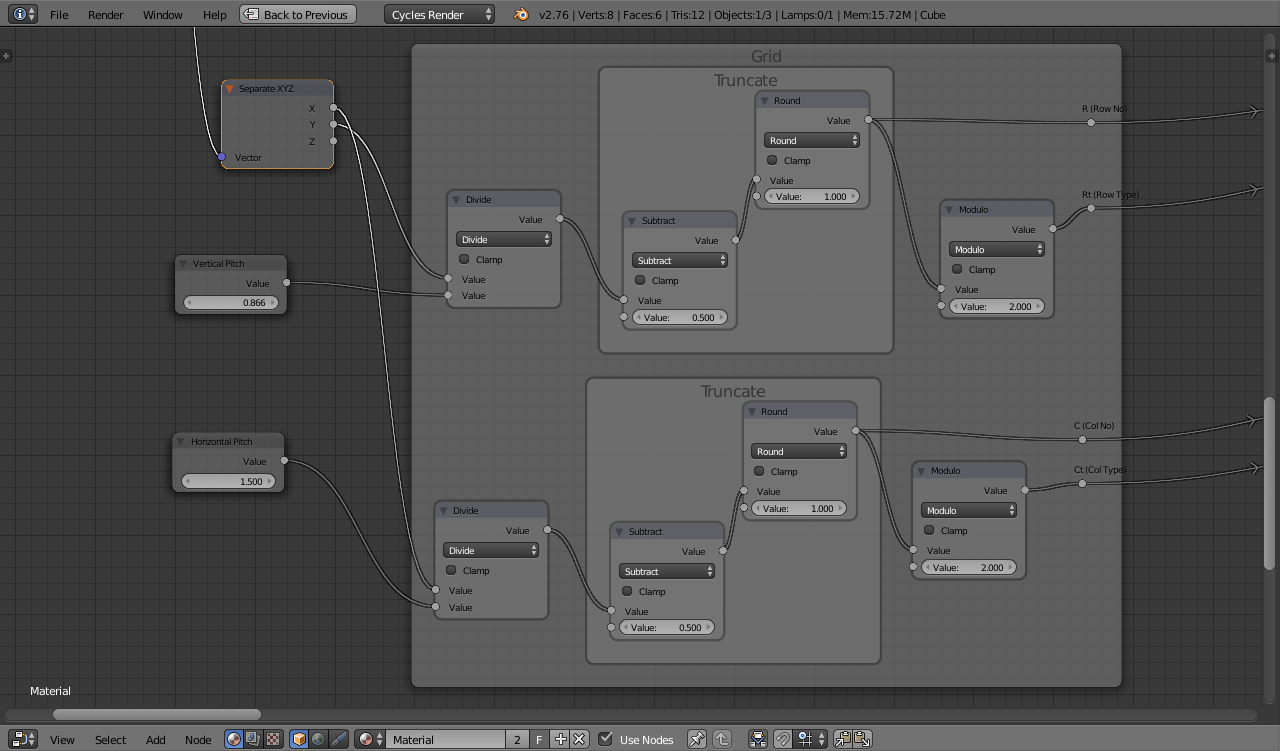 Once the location in the grid is known, the Generate Point Coordinates Frame calculates the locations of the "nearest" reference points. These are multiplied by the Horizontal and Vertical pitch to get coordinates that can be used with the current sample point to determine the distances. This can be illustrated as follows with the current sample point indicated in white with the 5 nearest cells shown :

The cell border can be adjusted via the Edge Offset and Edge Power values. Larger Offset results in thicker borders to the cells while the Power affects the hardness of the cell edge. Negative values can give some interesting effects (eg, Offset = -0.5 with Power = 1.0 provides a quilted effect with soft borders, while a small positive Offset and Power 0 gives hard narrow lines between cells). 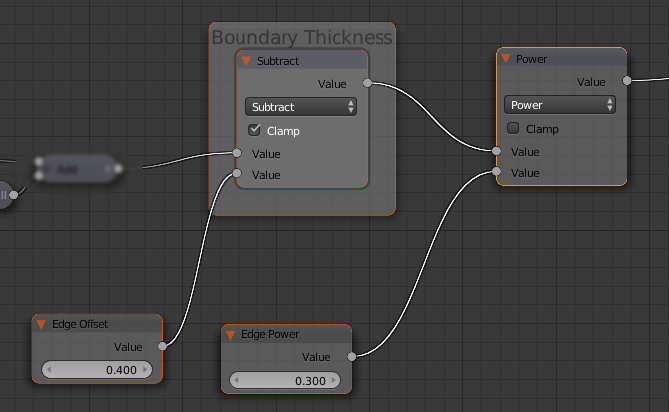 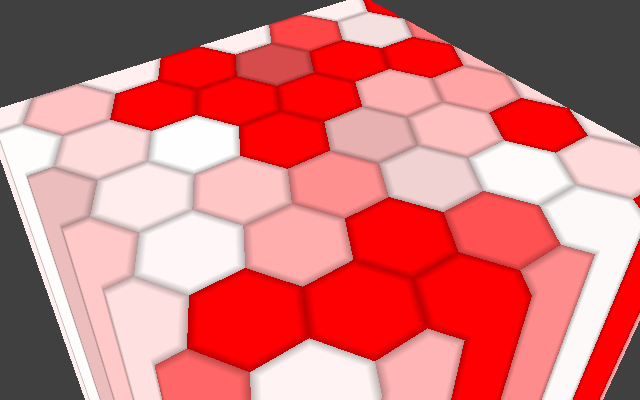 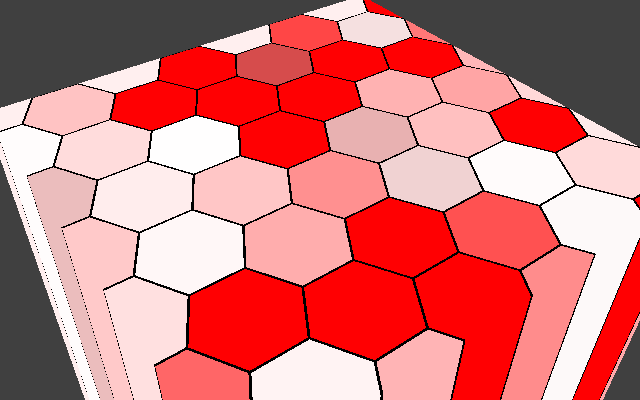 For the cell colours, a noise texture is used to generate a value between 0 and 1 based on the cell vector and this is multiplied up and passed through a Modulo 1 node to generate a (mostly) linear distribution. An Offset is added to allow it to be animated and the result passed through a further Modulo 1 so that the value wraps around at the edges of the 0 to 1 range. This is then passed through a colour ramp to generate the final shade for each cell. Using the cell coordinate as a basis for this colour generation ensures each cell is coloured consistently.

The maths used to manipulate the grid and dynamically position the reference points works fine with positive coordinates - so plain old 'Generated' coordinates should work well. However, switching to Object coordinates will result in negative values which upset the calculations. To work around this you need to increase the Location of the Mapping node to avoid the negative texture coordinates.

this is just a self contain version of the previous post.that should be easier for beginners with blender. 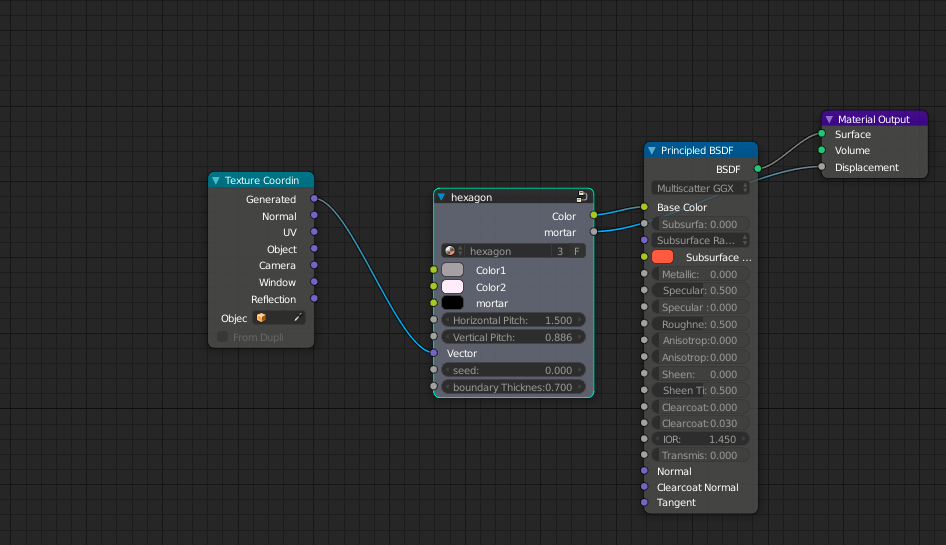 you can simulate this with textures, via nodes: Prepare several image files (better PNG because they can store transparecy) with the pattern you want (hexagons, squares,...). Those several images will need to be sequencial (change colour between them - example, you extract the frames from your hexagon's GIF file). After all PNG's are ready, you select the faces where you want these images to be applied, and while in Edit mode, press U to UV unwrap them. Unde UV Image Editor, Edit vertices and faces position to match as you want your image sequence. On nodes, instead of importing an ordinary image texture, you import an image sequence (these way you have control on lights on/lights off you made on your PNG files). You can also add an emission shader, and keyframe diffent values of strength in time, so it changes the intense of brightness of those lights. You might try with this node setup sample:

24
How can I make a hexagonal grill?
37
How to give an image or video a TV screen effect?
23
Randomly populating procedural shape (or Image Texture) in Cycles
4
How to create our own procedural texture like the default ones in blender
5
How to control many tiny lights