How can I make a wall around a road on a cars track?

I'm new on blender and I'm doing (at least trying) a Assetto Corsa track. The question is about creating a wall on the two sides of the road.
I created a wall with a cube, added an array modifier pointing to my nurbs path and then I created a curve modifier, so the wall follows the middle of the road. But I can't edit the X axis of that wall, so I can't scale it to match the outside or the inside of the road. It looks like this: 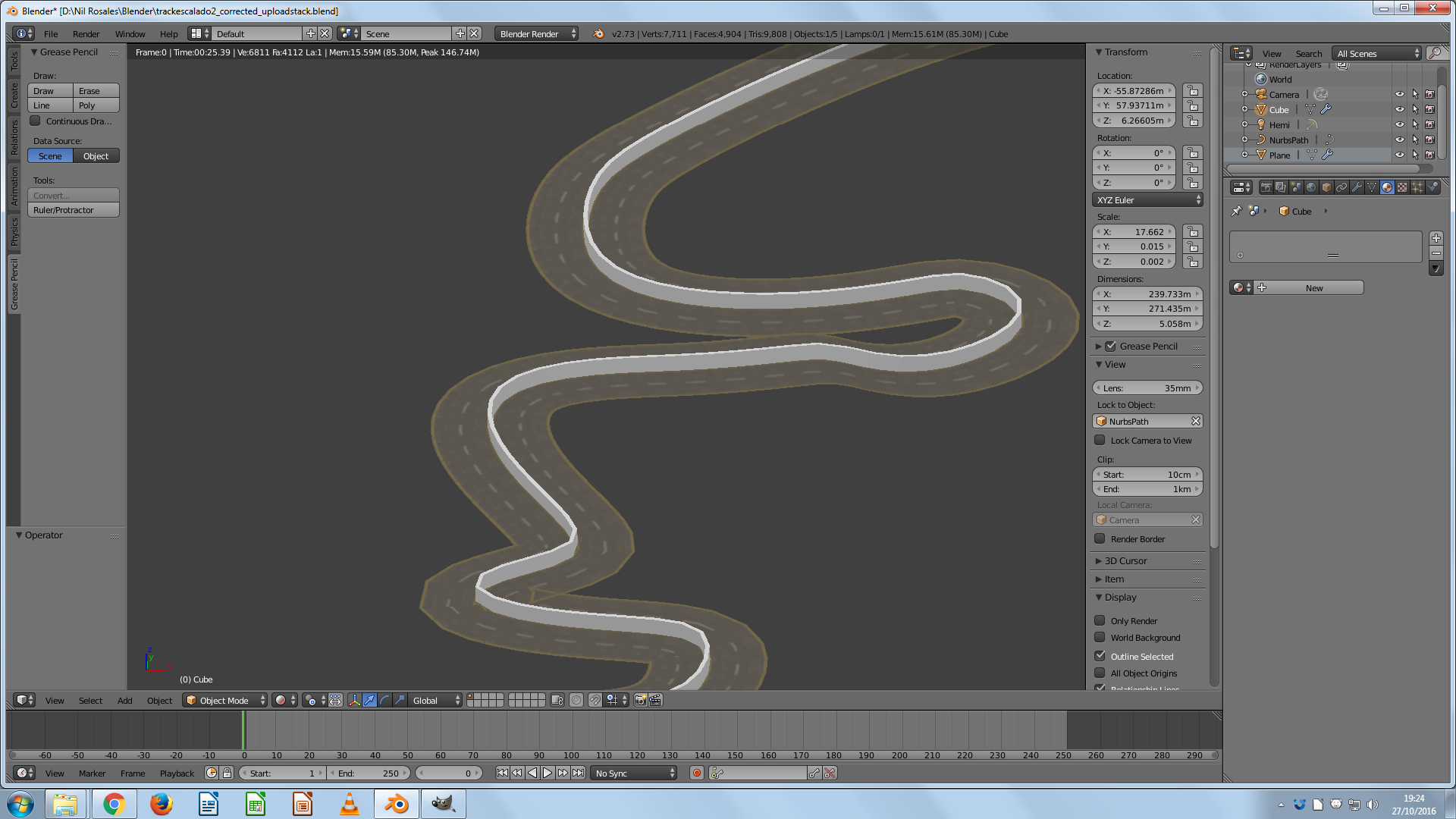 Here I leave you my .blend so you can check anything you need.

Thanks in advance for any help :)

it's quite easy with your data: go to edit mode (press TAB), make your selections as edges (press CTRL+TAB >Edges), select the edge loop you want (ALT+rightclick), extrude in Zaxys (press E > press Z > type 0.01. Repeat the process for the other side of the road. You should get something like the image below 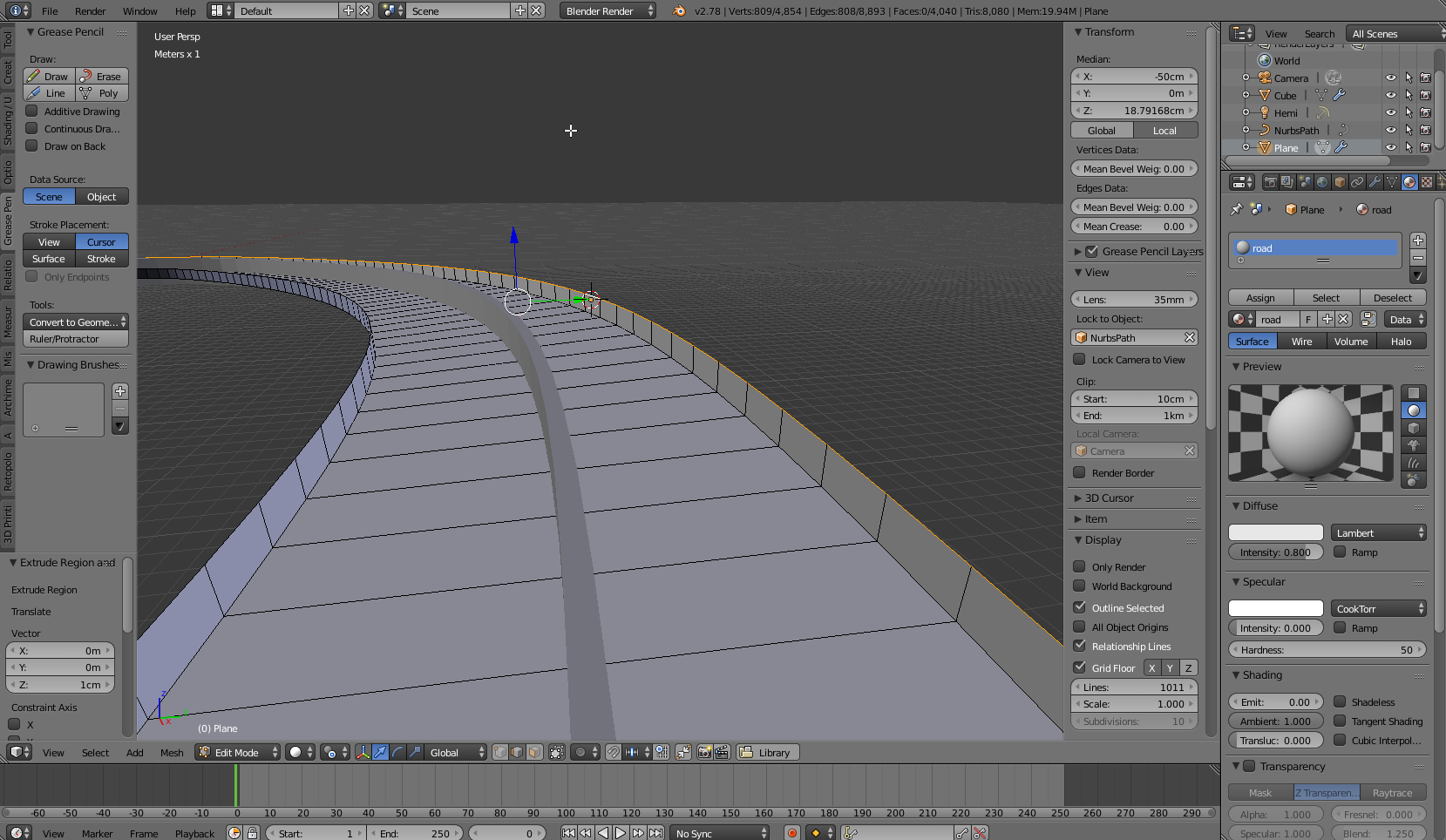 . Optionally, if you want these walls to be a separate object, select the higher edges (shift+alt+rightclick), press CTRL+TAB for face mode, press CTRL+plus until desired faces are selected, press P, and separate by selection.

I noticed that your curve object is what makes it hard to model the road details. Here is how to clean it up a bit.

First, I deleted the Plane and the Cube, both of them had rotated axes, were way too small and can be recreated quickly later.

For a flat street, it's the easiest way to use a flat curve. (The "not twisted" kind of flat.)
This is not the case in your .blend file.

To flatten the curve, select all control points in Edit Mode.
Then use Alt+T to reset the tilt, or find it in the menu in Curve > Control Points > Clear Tilt. 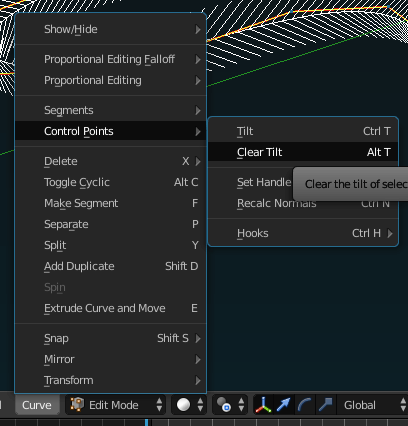 The curve should now look like this, which already resembles a road.

If you uncheck Radius in the curve settings, you can model a section of the street easily in the same size that you want it to be when it's applied to the curve. 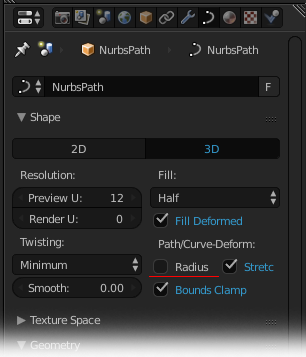 In order to stop the single section from overlapping with the curve, I set the objects' origins to the 3D cursor, which I snapped to the center before.
It was the easiest part to model the street section at a 1:1 scale with the correct axes.

Just make sure to add a few loop cuts to have it bend smoothly.

Have a nice day.

1
Constraining vertices in the Z axis when array, curve and shrinkwrap modifiers applied
1
Can't fit plane to nurbs path to create a race track
0
Workflow: iterative rigid body array/curve tweaking, is there a better way?
3
Why does my camera start rotating randomly when following a path?
1
Curve modifier does not work when you merge another curve to the original curve
1
How can I use the curve modifier with curves that have sharp corners?