This is what I want to accomplish: User starts the game and a scene shows up (a landscape). An audio file plays telling the user a story about the fictional world my game is set on. After that, the user might want to change to another scene showing information about an object (let's say a plant or animal) but when coming back to my previous scene (the landscape) I don't want the audio file with the story about my world to play once again. My user might want to pick several objects in the first scene so I don't want the story to be replayed every time he/she picks an object.

I've tried through messages from one scene to another but found out that is not possible since messages only work with objects within one scene.

I decided to try Python scripting, adding a game property to my first scene and changing the property value through code but even though my variable value changes to "4" from its initial value of "2", it still keeps on playing the file, like shown in here: 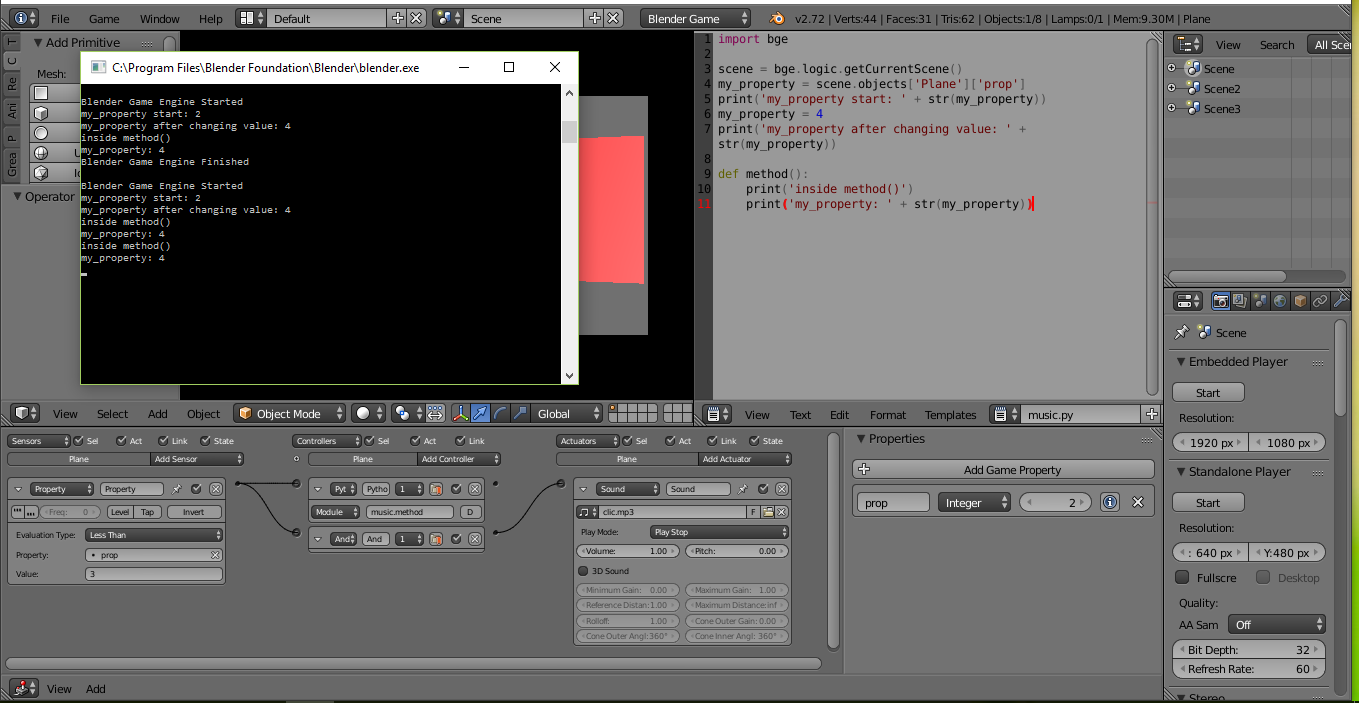 As you can see my property value changes but the "Property Sensor" is still being triggered, causing the audio file to be played.

Do you have any suggestion on how to accomplish what I want?

You need to store and restore the game state.

The game state are all changes to the game that happens while playing the game. This includes the position of the camera as well as the currently played pose of an action as well if a menu is visible or not.

In general the game state is covered by the active scenes. When you remove a scene all states from that scene will get removed too.

-> imagine you moved the default cube from (0,0,0) to (2,0,0). You remove the scene ... the cube will be removed together with the changed position and everything else in the scene. There is no way to recover that information.

As the scene will get lost you can't use the scene as storage. Alternative storage is:

In all cases you will need Python to at least restore the data.

This answer will focus on using python modules as storage as this is the most flexible and generic storage (beside keeping the scene alive).

(Do not confuse python modules with python scripts - scripts will not persist!)

Basically you write the data to be stored into a module attribute.

The storage has to be at module level (no indentation) Alternative you can write to a module attribute from within a function:

Do not forget keyword global!

Typically you want to store more than a single object. The easiest way is to create a separate object that acts as "sub-storage". It can be any container.

Example usable at your situation

Here I suggest to use a dictionary. It allows you to access the data by a key such as a string:

[Module] storage.py - do not set it up at the python controller directly

This example is already a solution to your question. What will happen:

A) when the start-up scene gets loaded you check if the storage contains the key "audio already played". At the first run it should not be present. The above script activate_when_audio_never_played will activate all actuators (including your audio actuator).

B) You need to run the script store_audio_already_played after A). Either you place the controller below the controller of A) or you activate the controller at the second frame of the scene. The last one would be better. That way you can be sure it was played at least a little bit.

This one does not need actuators as it acts as actuator already.

Finally that is all.

I suggest to evaluate the process flow when the scene gets switched before frame 61.

It is important to note that you should not store data that can be destroyed such as game objects. You can store them but as soon as you switch scenes your storage will refer to invalid objects (see: KX_GameObject.invalid). It is better to avoid them.

Such a storage can easily be used to create save points. Save points contain the data at the moment of creating them. On request you can restore this data back to scene.

Typically you can save a storage to a file (saving) and load it within the same or another game session (loading). This way the data survives ending the current game. [Assuming you do not store objects that can't be restored such as KX_GameoObject or mathutils.Vector].

You can never "return" to a scene. When you removed it the scene and all of the changes are gone. You can load a scene from the same source. It looks equal as it is constructed the same way. But it is a completely new scene. Any changes of the other (dead) scene will not be present in the new scene.

Do not come back to the start scene. There is no reason to do so. The start is done, so the player should continue with the next steps. (Unless this is what your game flow is supposed to do.)

It will even continue to run while you watch the overlay scene.

When you do not want that you can suspend the level scene.

Not the answer you're looking for? Browse other questions tagged python scripting game-engine audio or ask your own question.

6
Can gravity be disabled for a single object in the BGE?
1
How to retrieve value from StringProperty?
5
No audio playback in VSE but rendered file has audio
2
How to get current position of an object using Blender's Python API in BGE?
0
Modifying a .blend file using python script(s) need to edit text inside a scene
0
Buffer property changes / shadow properties / restore properties
0
Can you access the distance values from the numeric input?