I have small problem, let say I have this mesh:

At the end it needs to be split into separate chunks/objects (in this example it's split in five chunks) like this:

The problem is that normals are wrong as opposed to original mesh which makes shading go wrong (visible seams between objects). I've tried to use Auto Smooth and it's quite better, but still worse than original mesh.

This mesh is just an example of my original mesh which at the end will be exported in order to be used in external game engine with OpenGL as a backend renderer, so for OpenGL it doesn't matter whether it's rendered as one object or not (I'm NOT using triangle strips) as long as normals are the same as were before. Is there a possibility to separate mesh into objects while maintaining original normals?

Unfortunately Blender has no method to adjust vertex normals by hand, so the only way to fix this (well, sorta...) is to separate your mesh in a way that the vertex normals don't change their direction at the cuts.

In a nutshell this means cutting up your mesh in the areas where you have a more even geometry. Depending on your geometry this might not entirely fix your problem but it reduces the amount of difference in the shading significantly. Keep in mind that this also might increase the loopcuts, which results in more vertices/faces.

In the image below I marked the areas where I put the loopcuts with green arrows. 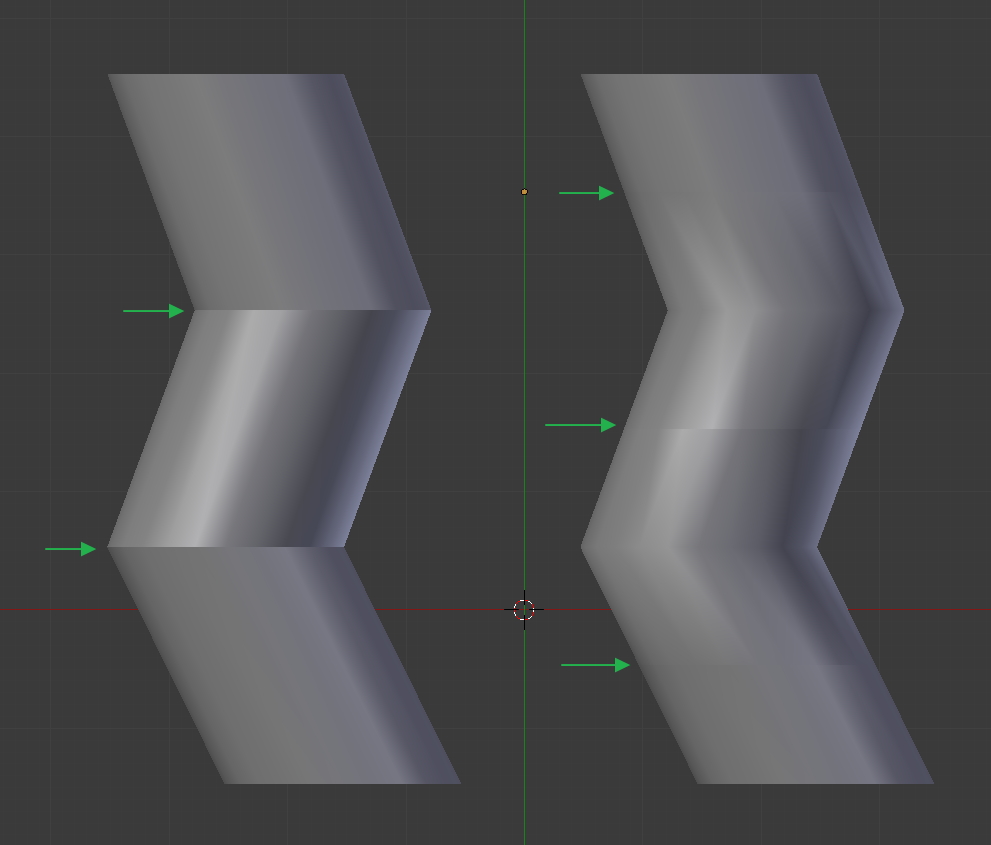 Thanks everybody for answers and comments, but it's quite sad that Blender doesn't allow this.

So, as I'm using my custom script written in Python in order to export scene objects to my custom format I've modified my script and added small preprocessing feature which makes use of object custom properties. What it does is that it checks for property with name "Group", then calculates all smooth normals for each vertex in object mesh and takes all meshes from other objects that have "Group" property with the same value into account while preprocessing vertices.

Result? It looks the same as original mesh and everything is processed automatically with my script, problem solved. :)

I created a Blender add-on for this exact purpose called TiNA which allows you to easily transfer normals between objects. TiNA basically turns the somewhat overwhelming Data Transfer Modifier into a set of more comprehensible operations.
There's a special branch for those using Blender 2.80 beta.

Not the answer you're looking for? Browse other questions tagged mesh objects normals or ask your own question.

1
Normals messed up after applying transform
7
How to have different origin for each object when separating a mesh by loose parts?
0
Blender mesh gets strange normals in Unity 5
4
Copying Vertex Normals
1
Python: Bisect mesh into n parts, without separate 'LOOSE'
0
UNLINK does not work to convert particles into new/original meshes