Sorry in advance if this has been answered.

Is there a way to set each of my 3 lights (key, fill, rim) up in such a way that Blender will render them all individually?

I have looked into File output in Compositor, and have thought of Render Layers, but have come short of a solution?

It should be mentioned that my lights are not lamps, but planes with emission shaders.

You may noticed, that Cycles is lacking a certain Blender Internal functionality which would help this. Mesh lights don't have a This Layer Only option.

My suggestion would be to use a python script.

Reserve one layer each for your specific lights. Store the specific lamp objects on each layer. You mustn't have other objects in these layers, but the scene should still be intact if either of the layers was switched of.

In my example case I will place a key, fill and rim object respectively in layers 0, 1 and 2.

These settings are specified in an array at the beginning of the script.

Each Light Layer is switched on, the others off (none Light Layers will not be affected), then the scene is rendered.

This will produce the following. 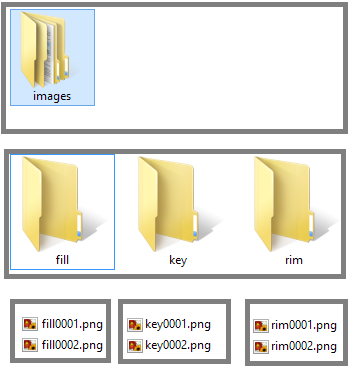 Not the answer you're looking for? Browse other questions tagged cycles-render-engine light render-layers render-passes or ask your own question.

1
Cycles - How can I render only pre-baked textures, and not calculate shadows?
2
Fastest way to export files multiple passes into folders?
0
I'm using cycles render and I can't figure out how to render the image texture
6
Blender 2.8: Where can I find light energy/intensity in Cycles?
3
Some pixels doesn't render on the image ID MASK
1
In Blender 2.8 +, how do I limit the (animation / multi-frame) render to only one pass (e.g. only z-pass or only Mist pass)?
1
Any way to get a multilayer video?