How can I generate an object from a mathematical function?

I have a formula that mathematically describes the heart surface in Cartesian coordinates:

Unfortunately, I have no idea how to implement it in Blender.

Explicitly, I want to use for the Mesh Math Function. I already activated the Addon ADD Mesh: Extra Objects.

I searched for a tutorial, also for a syntax, I have found nothing, something near it.

I created (guess) from other functions this syntax.

I found another formula:

The first can be crunched into XYZ surface. Notice the use of fabs(...) in the A helper function. The abs(...) method is not in the list of allowable methods and creates an error. 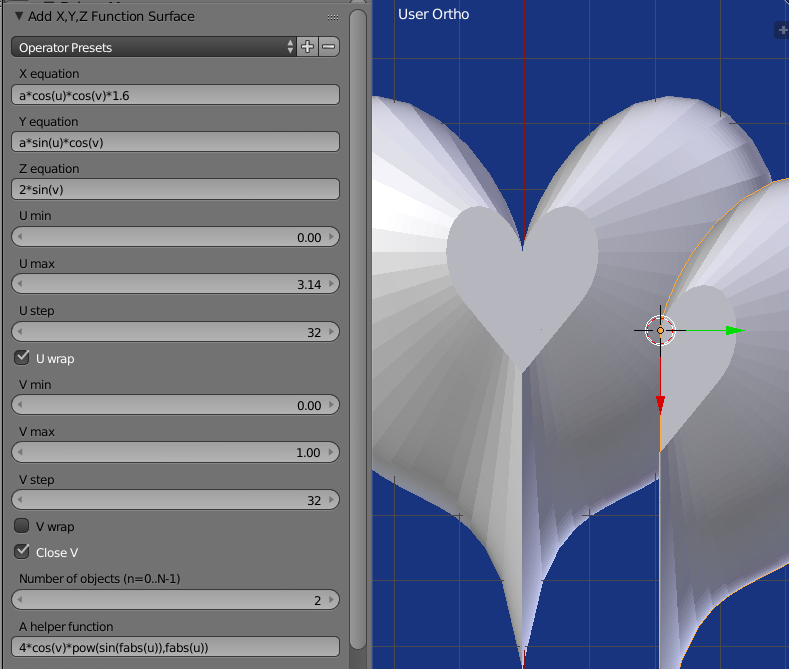 Here is some code for the second. Which required a mapping from spherical coordinates. Run the code to produce a heart mesh. Change the line h = heart(1.0, 1.0, 0.2) to produce other hearts. 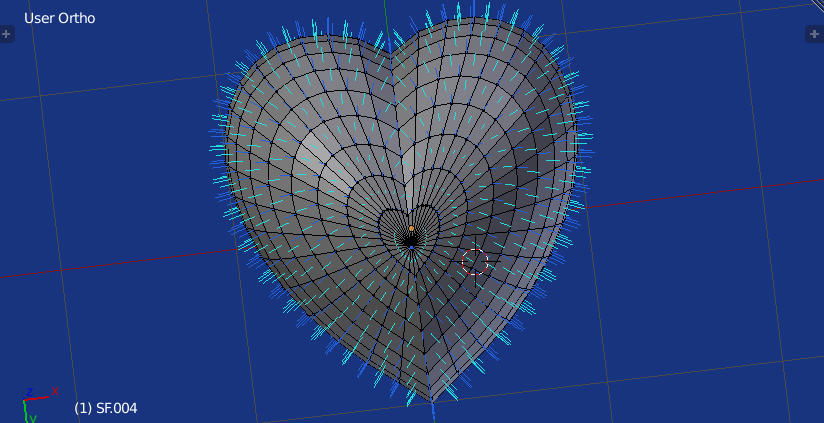 Can change the shape by tweaking the scalars in the heart equation. For example

Samples of both using Spherical and Toroidal spaces 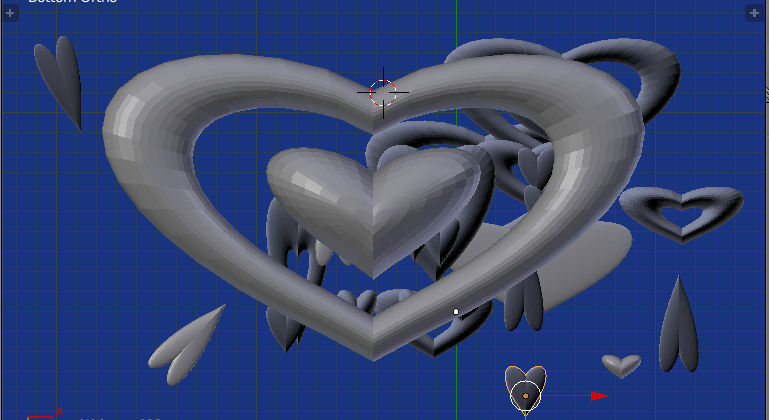 Another similarish object is the cardioid

I wrote a computer program which does just this over the last several years as a postdoc. It's called Bertini_real, and is part of the Bertini suite of software products for computing solutions to algebraic equations. The field of mathematics this software comes from is called Numerical Algebraic Geometry.

First, we need to get some complex points on the surface. For this, we write an input file for Bertini, and call bertini, using tracktype 1 to compute the witness set. In this case, we expect six points, because the component is a hypersurface, which always has degree equal to the degree of the polynomial. 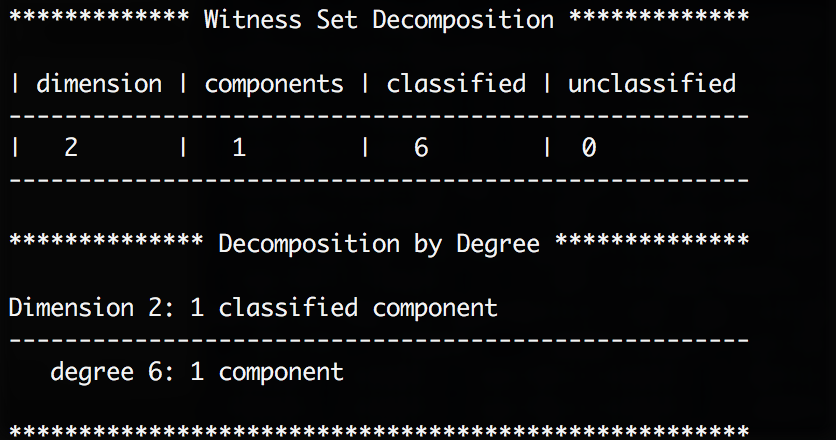 Great, now Bertini has confirmed that the surface is indeed of degree 6. Nice. Next is to get just the real part of this complex object. This is where Bertini_real comes in. The software unfortunately depends on Matlab right now, but we are working to replace it with Python so the software is completely free. Almost there as of December 2016.

Next, invoke bertini_real on the same input file. A whole bunch of stuff happens, including computing that set of measure 0 which cannot be well-parameterized by the two parameters. By the way, the two parameters we use for the computation of your surface are random orthogonal linear projections of the coordinates of the surface. The set of measure 0 is called the critical curve, and in this case consists of a curve which depends on the random projection, and a singular curve about the waist of the heart, as show below: 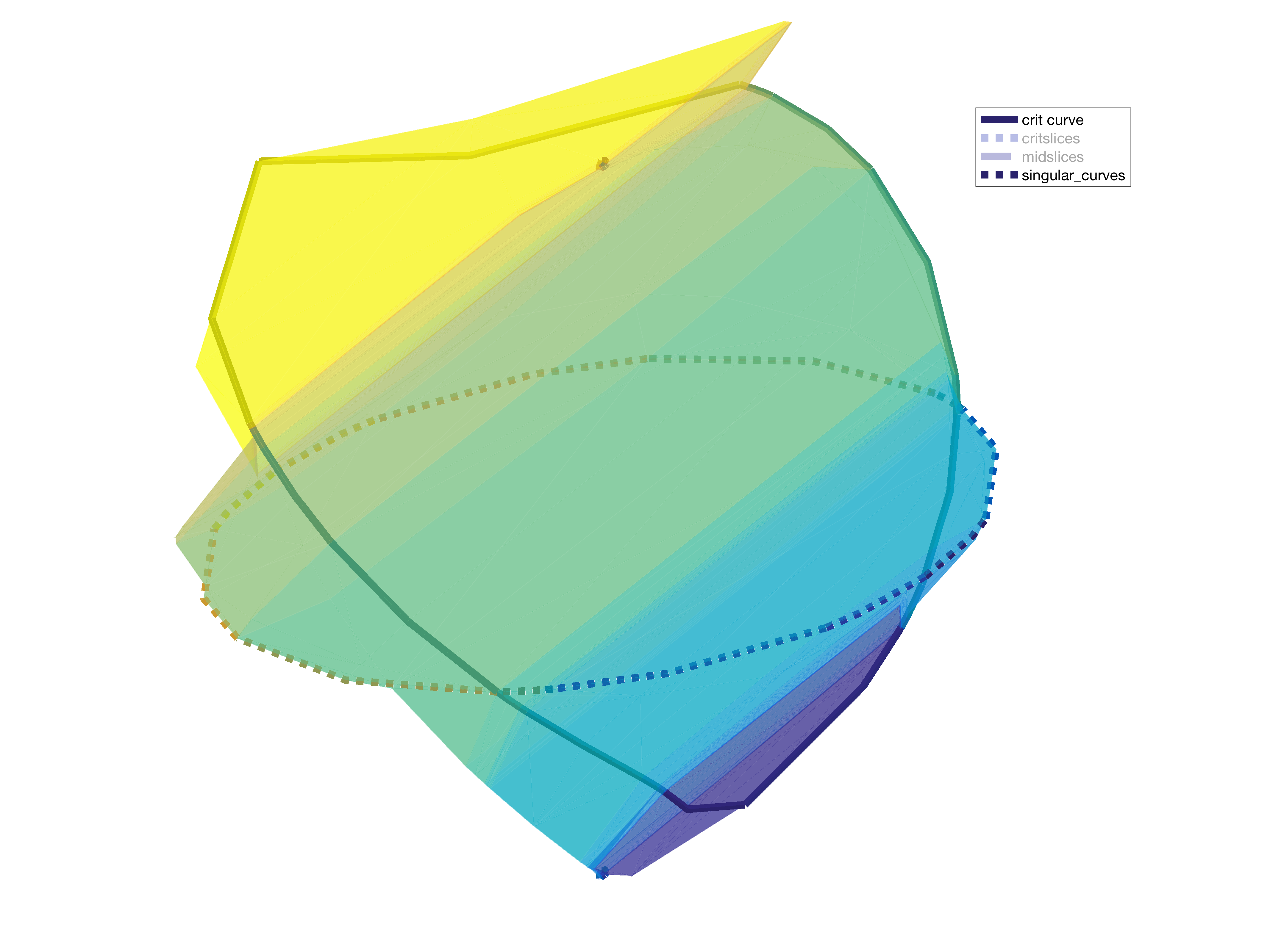 It doesn't look much like the heart you are after, and that's because this is the raw decomposition, and it needs to be refined. Invoking the sampler from Bertini_real will refine it, using your settings. Here's an older refinement I produced a few months ago: 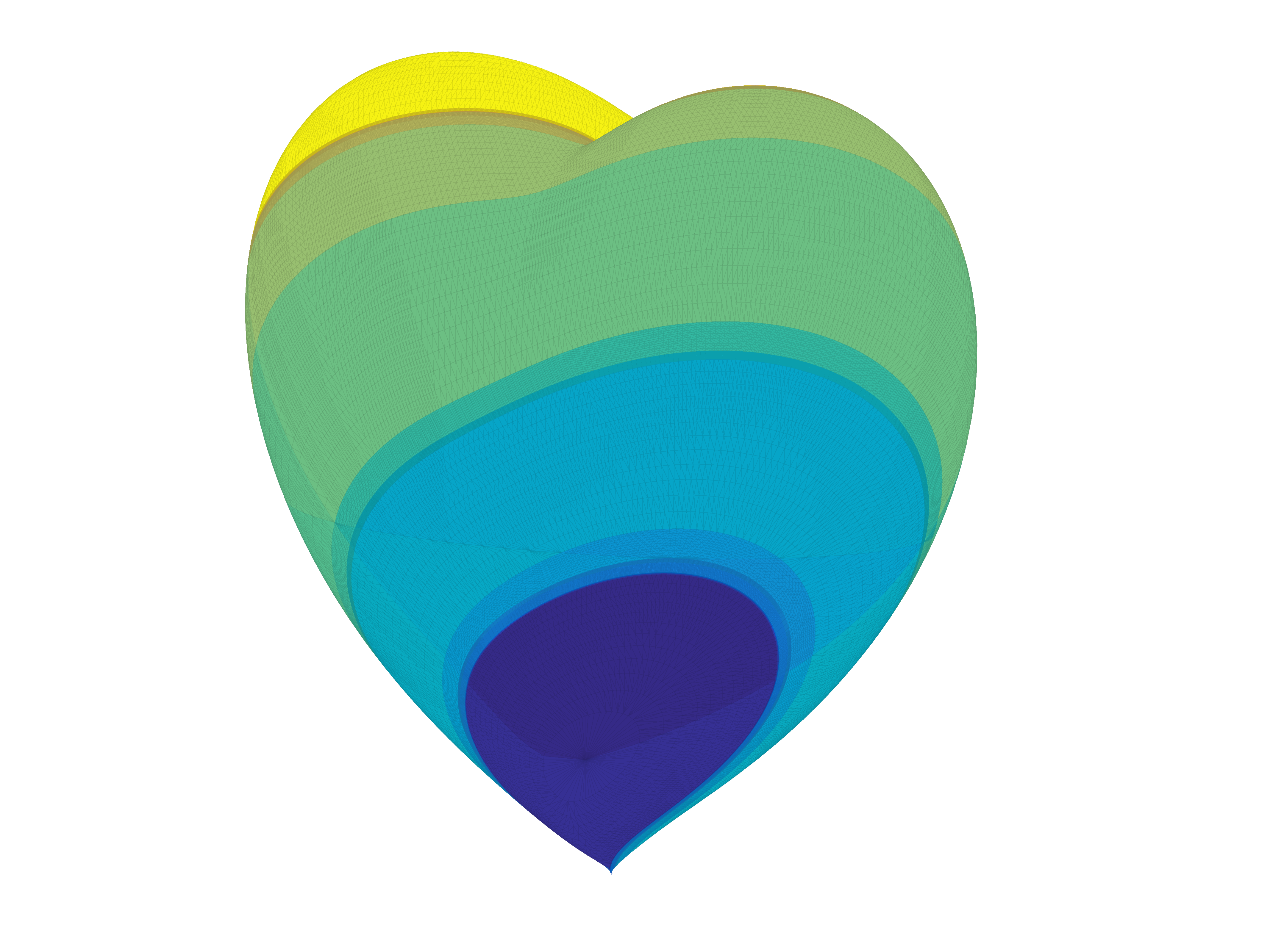 Looks better, right? I used my plotting software in Matlab for these images. Now, we export the surface to .stl format. Perhaps there are better formats. I use .stl. Importing into Blender reveals some faces are mis-oriented. Bertini_real does not compute normals, because the normal is ill-defined in higher ambient dimensions than 3. So, I let Blender do it for me. 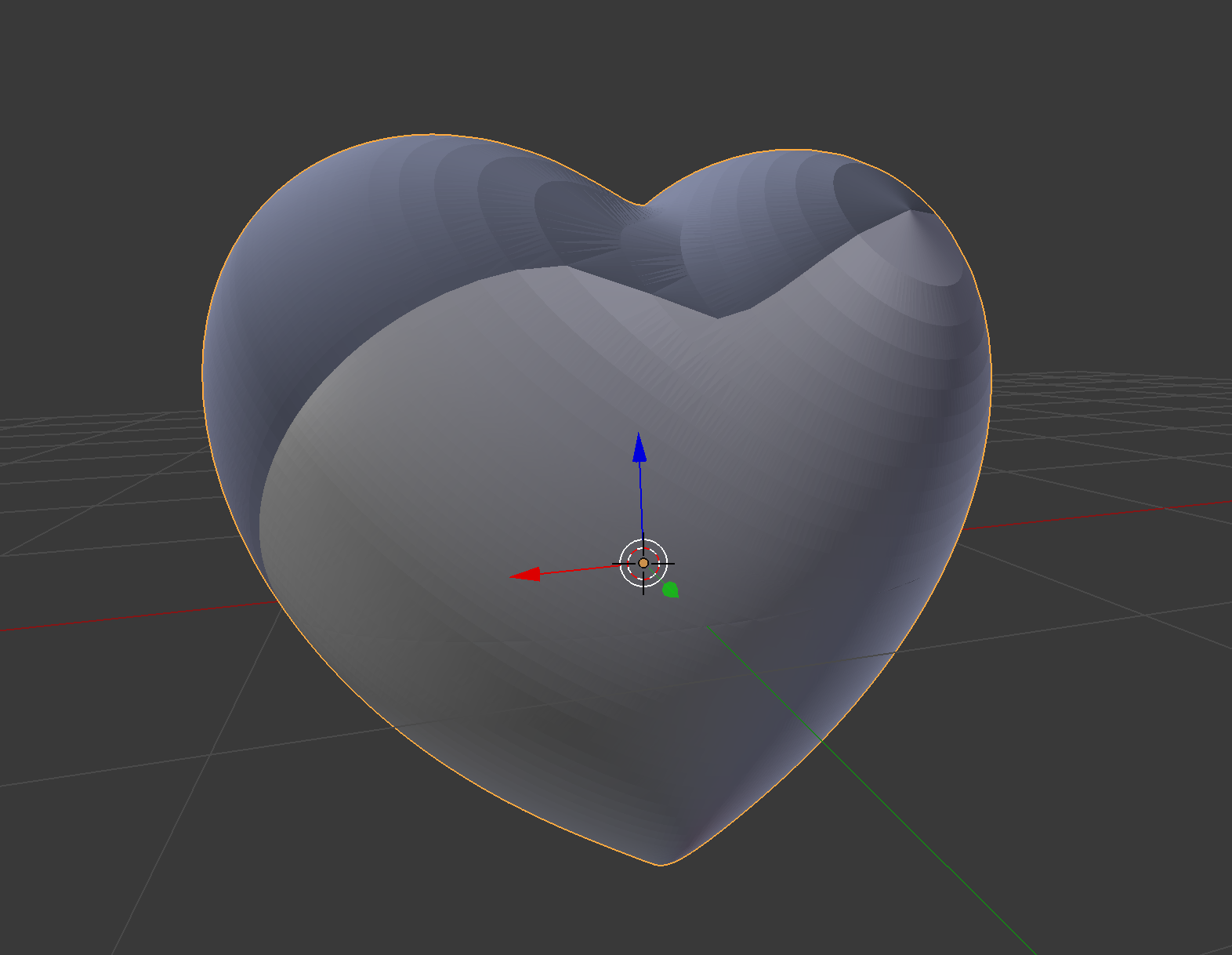 Using the recalculate normals function in Edit mode in Blender fixes this issue. At this point, we now have a well-oriented mathematical heart in Blender.

I take it one step further, and 3D print it. Here's a result: 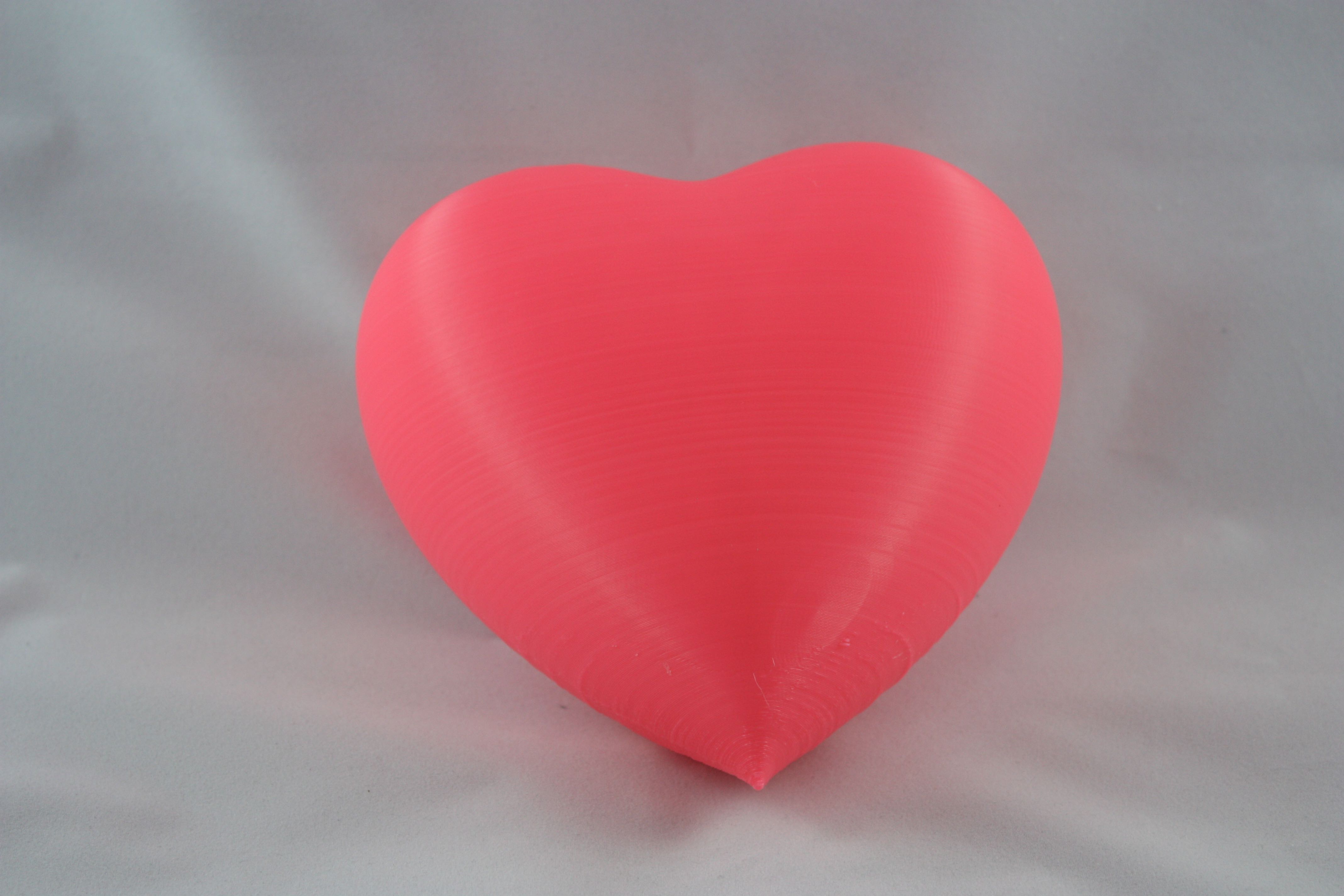 We can do this process for any algebraic surface. You do not need to fuss around with trying to compute z = f(x,y), because that happens implicitly as part of Bertini_real's decomposition. The set on which this parameterization fails is called the critical curve, and is itself decomposed with the curve decomposition routine.

If you have Matlab, you can do this yourself. If you know how to program in Python, perhaps you'd be interested in contributing to my software, in the form of visualization and .stl export directly from Python, so I can eliminate Matlab?

The more complicated the surface, the more challenging the decomposition. Surfaces such as Barth's Dodecahedric are really hard to get to compute 100% correctly. But nice ones such as this heart, aren't that bad.

Check out Herwig Hauser's gallery of algebraic surfaces, and my reproduction in plastic.

If you want to learn more about the software I use, or the theory behind it, I recommend the book that goes with the software Bertini, called Numerically solving polynomial systems with Bertini. Not an intro book, but it tells you how to do things, and has worked examples.

Also, I made a 37 minute real-time video of me going from equation to printable object, using the above process including Blender for a significant portion of post-processing, available here.

I finally conclude that this answer does use software that is not part of the Blender world, but due to the genuine challenge of rendering implicit mathematical objects, a generic solution to this question is probably not going to be present in Blender any time soon.

edit: since I now have sufficient rep, I added more links, and several concluding paragraphs

If you require that specific formula, you're in for a rough ride, as it would require solving a sixth degree equation to isolate z. There are no general methods for algebraicly solving equations of degrees higher than 4. Special cases exist, where you can solve higher degree equations by simplifications, substitutions or factorisations. If you do need this formula, you should probably ask over on Math.SE if anyone can help you to either isolate z or convert the equation into a set of parametric equations for x, y and z.

I use hearts to some extent in my scenes, and I'll show you how I make them.
First, you need the Add Mesh: Extra Objects addon. To enable it, go to user preferences, CtrlAltU or File -> User Preferences..., go to the Add-ons tab and click Add Mesh, then click the check box next to Add Mesh: Extra Objects to enable it. To make the changes stick, click Save User Settings, then close the user preferences. 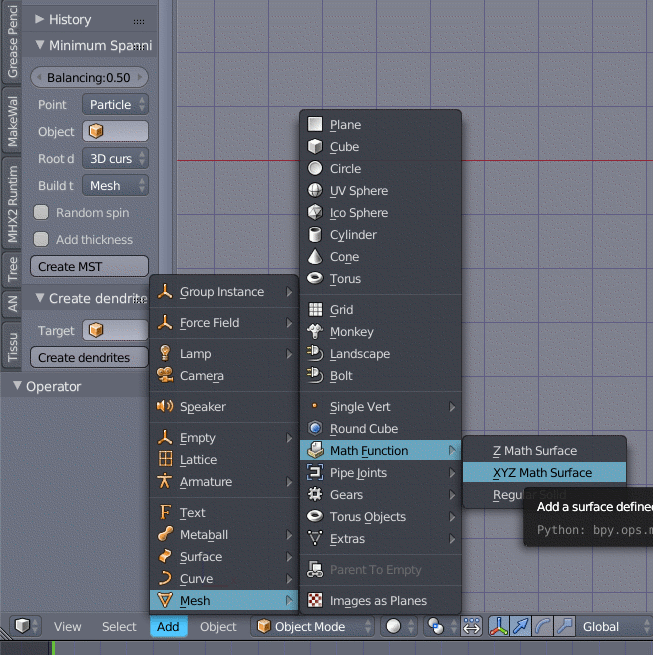 U step sets how many vertices you want along the curve.

Enable U wrap to close the curve.

Set both V min and V max to 0 and V step to 1. Disable V wrap and Close V. The remaining options can be left untouched. 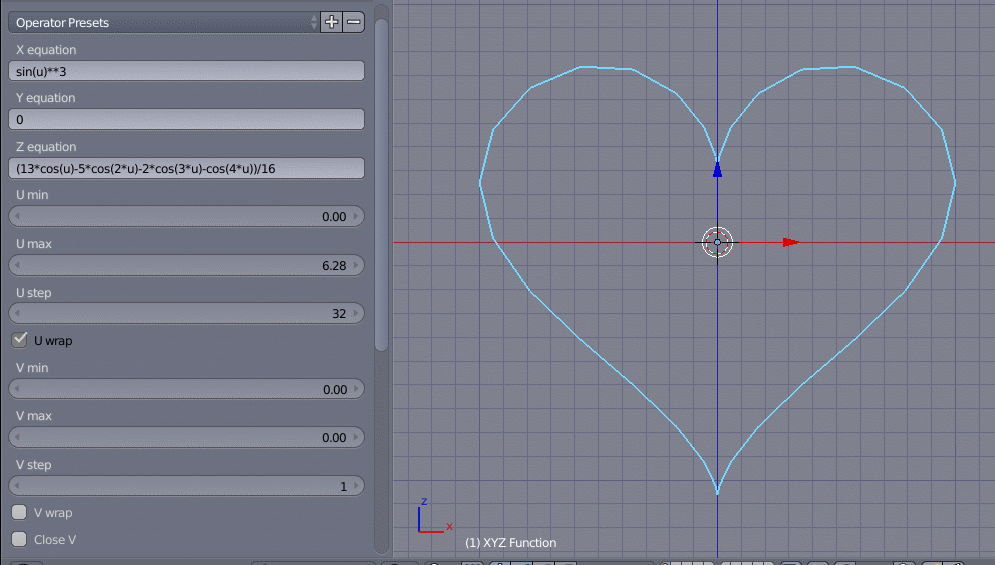 Tab into edit mode and make sure everything is selected (if it isn't, press A as many times as needed to select everything). Press CtrlV followed by D to remove double vertices. Press E to extrude then Esc to cancel moving the extrusion. Press S followed by some small number, for example .025, to scale the extruded vertices down. Then press Enter to confirm the scaling, then F to make a face. Usually I'd scale to 0 or collapse the vertices, but in this case I don't recomment it. This would create a bunch of triangles, and I normally tend to prefer them over n-gons, but in this case, the smallest angle of the tris around the cusps of the heart would be too small, and cause more distorsions when subdividing than an n-gon.
Press A twice to select everything, then press CtrlN to make the normals consistent. Press CtrlR then hover the mouse over one of the radial edges and scroll the mouse wheel to make some loop cuts, then press Enter to confirm the cuts followed by Esc to finish without sliding the cuts. 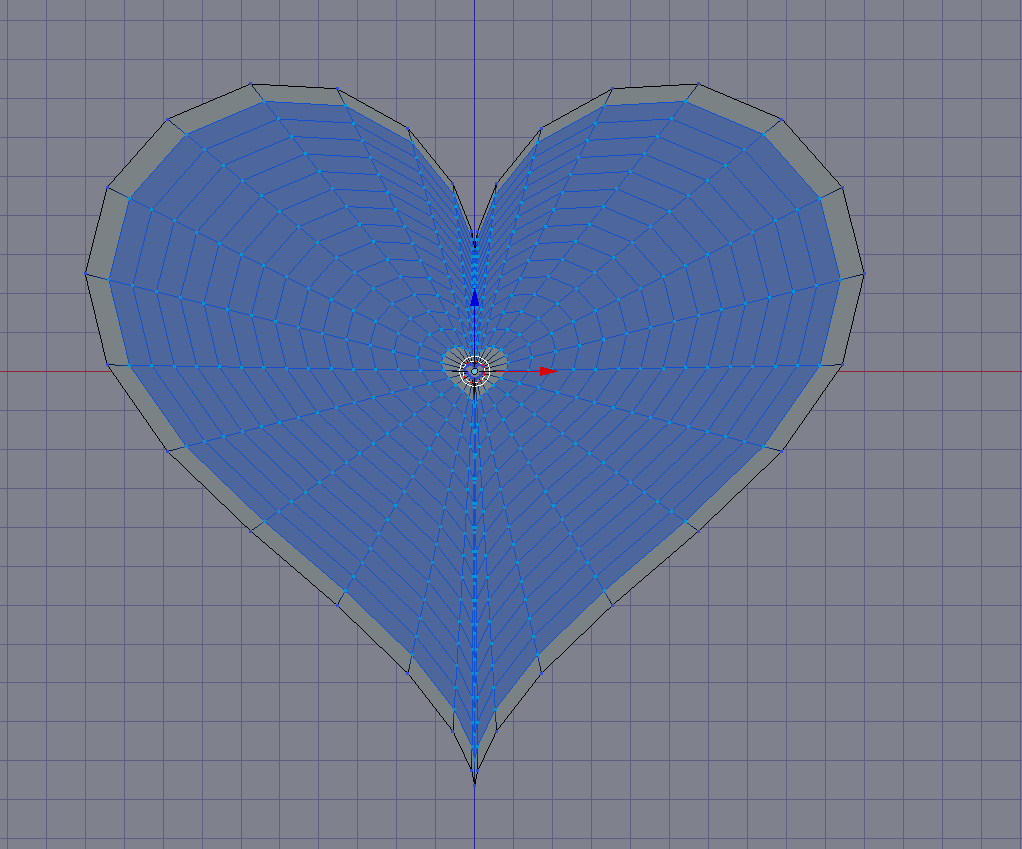 Tab out of edit mode and, if you so require or desire, add Solidify and/or Subsurf modifier(s). 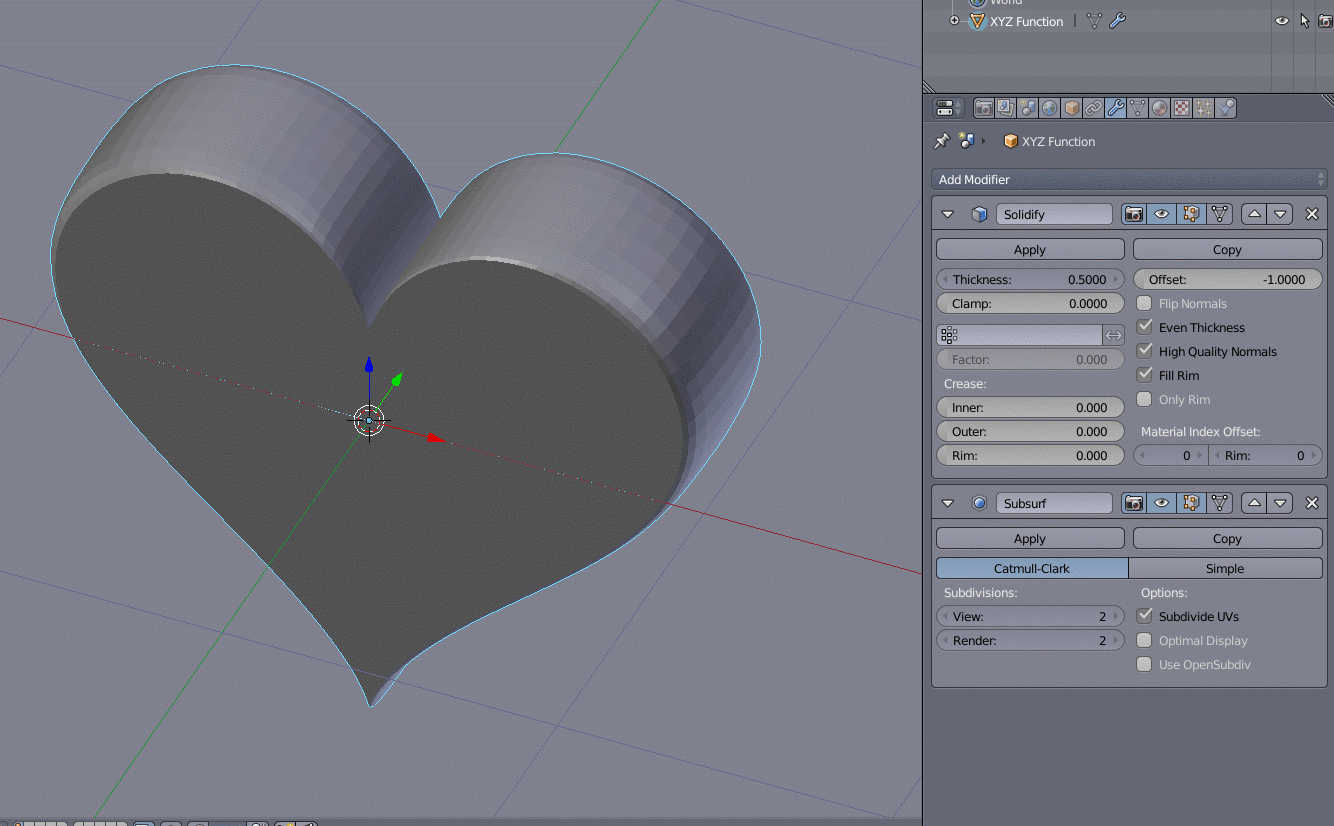 The amount of bevelling around the edges depends on the distance between the outher edge and the closest loop cut, so in essence it can be controled by decreasing or increasing the number of loop cuts made in the steps between the third and fourth image above, or by scaling those loop cuts down or up.

Not the answer you're looking for? Browse other questions tagged modeling mesh objects add-on mathematics or ask your own question.

0
Use python script to plot out a 3d function
8
Graph in blender a function of two variables,
2
How to make a spiral torus?
1
How to slim down a cuboid?
0
Drawing mathematical functions using Blender
1
Civic art project: 5'H x 5'W 3D heart shape sculpture. Can Blender map a 12" grid on it? From photos?
1
How can I correct more faces at the same time?

39
Generate curve from equation
4
How to nicely render mathematical object made from slices
6
how to change a mesh given by mathematical function with time i.e. how to include the time parameter in the mathematical equation?
15
How to: Exponential Fall Off for Volume Density?
4
Example for creating and rotating of a mathematical function in a script
1
Rigging Mesh With Separate Parts Deforms Incorrectly
5
How to smoothly connect Python-generated double-cone meshes to an energy landscape Plane mesh for scientific illustration