What is the proper way to update a portable Blender installation while keeping user settings?

The Windows portable installation has (or can have) the user settings folder (named '2.77' for instance, containing all the user preferences) next to all of it's files - which is perfect for me, since I can sync the whole installation via cloud drive.

But what is the proper update procedure in such a setup? A freshly downloaded portable installation already has a user settings folder, containing for instance the add-ons folder. So to keep my add-ons, I was simply renaming my user setting folder to match the downloaded one ('2.76' to '2.77' for instance), and then copied all downloaded files over existing ones, overwriting them. That works, but I'm not sure if that can introduce problems in the long run? And if there is a better way of doing the same thing (updating a portable install while keeping settings and add-ons)?

Running the new portable version (the zipped Blender file downloaded from blender.org) will fetch the user-pref from the common roaming location of Windows so previous preferences and add-ons will be automatically added/activated in the new version

But if a config folder is created in the portable blender 2.XX folder it will read write the bookmarks file, startup.blend and userpref.blend.from that location.

The location for config is shown for a moment in before the splash screen of Blender comes up when you launch it.

Please see the screenshot below. 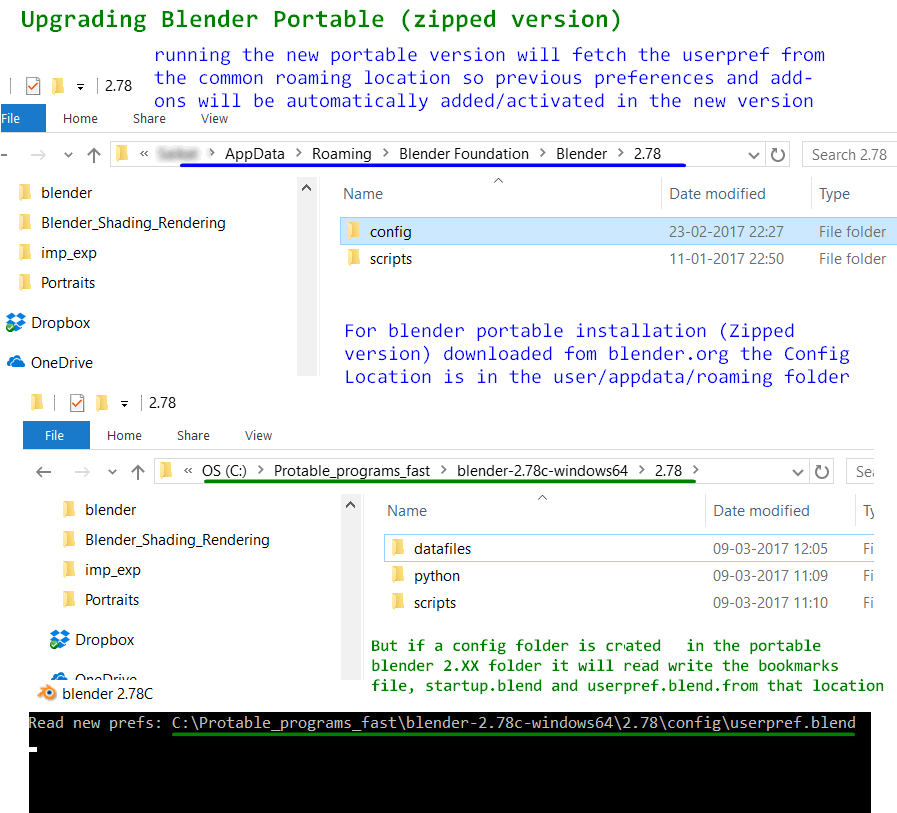 You should not replace the whole 2.## folder version with a previous one.

In a best case scenario that will not only roll back any updated versions of the addons the new version may bring, but also override any new presets, builtin Python scripts, UI scripts and bundled Python versions along with your personal config, essentially rolling Blender back to the previous installed version.

Worst case it will likely completely break your Blender installation, especially between major versions, as old scripts and presets may be incompatible with new APIs and binary file changes.

You should only copy the Config folder inside the 2.## which should contain your bookmarks file, startup.blend and userpref.blend.

Alternatively you can use Blender command line launch parameters to achieve a fully functioning portable installation with a proper dedicated folder for user data and addons.

Blender supports several launch variables, a few of them are BLENDER_USER_CONFIG and BLENDER_USER_SCRIPTSwhich allow overriding the default folders for user configuration (where startup files are saved) and the folder for users scripts and addons, where third party installed addons, presets, keyconfigs and scripts are installed.

The trick is to launch Blender from a batch file that sets this to your custom desired location.

Here is an example, in a plain text editor like Notepad paste the below lines of code and save them to the same folder as Blender.exe, give it a any name like "Blender_Portable" but make sure you specify the file extension as .bat not .txt.

It should be setup in such manner that the file system would look like.

Adapt to your own needs, you may want Blender installation contained in an independent subfolder separate from the rest of the setup.

Not the answer you're looking for? Browse other questions tagged installation versions or ask your own question.

2
Can I change default folder to save startup file (startup.blend and userpref.blend)?
5
Backup Blender addons and settings
0
Can I move Blender between drives without breaking the installation?
1
Local Config and Userprefs on Network Deployment - How to share an install but allow users to save their own settings per-workstation?

3
Why is the Steam version of Blender taking so long update?
3
Issues installing Oscurart addons
0
My Blender is crashing after I installed an addon twice by accident. How can I fix it?
1
Possible to make an Installation version of Blender with all current Add-ons and Settings?
1
Installing glTF-Blender-IO latest Version in Blender 2.8
0
how can i start blender 2.8 in ubuntu 18.04