How do I rotate some text?

I'm making a logo in blender. I originally converted a PNG to SVG and then imported it to Blender but that made a really messy mesh. So now I'm making it straight in blender.

Here's what I've got so far: 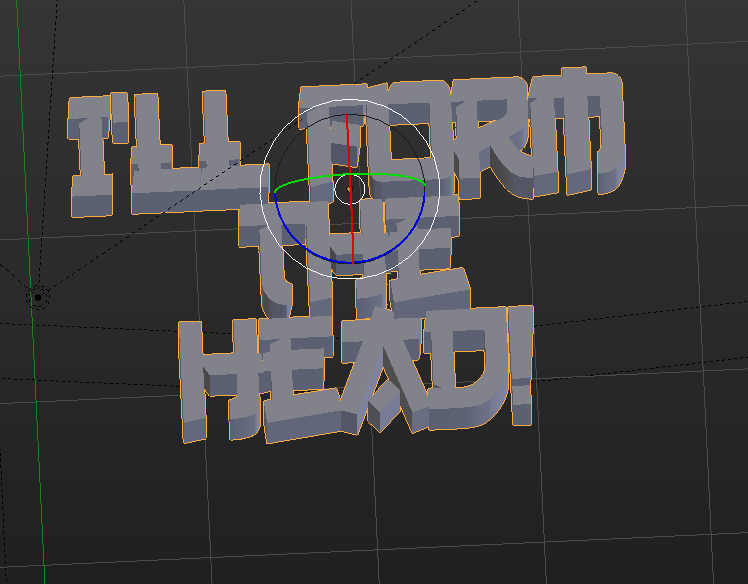 I basically just typed it out and then extruded it using the Solidify modifier.

But I can't rotate it, or move it. I tried converting it to curve and then mesh but it still won't rotate. Also converting it messes up the mesh pretty bad.

Any clue what's going on?

Also if there are ways I could improve my workflow, let me know. Is there a better way to extrude the text? I also plan on curving it around a circle, towards the camera (so not like around a ball like you would see in photoshop but in the 3rd dimension like a hug or something)

If you 'typed it out' in Blender I'm assuming you used the text tool. If that is the case, then you have been wasting time, since it is still a curve object and will also have a messed up topology.

Text tools are just a special type of Bezier curve objects, so if you plan on converting to mesh might as well have just used the one imported from SVG you already had directly.

Curve objects are actually an underrated and powerful modeling tool to use, if you don't plan on converting to a mesh object later. That will often lead to triangulated uneven topology, unless you do some serious manual cleanup work.

If you don't plan on doing any heavy edits and shape modifications I'd recommend leaving them as curves objects.

Create your text then in Object Mode press Alt + C > Convert to Curve, then use the built in curve properties (not a Solidify modifier) for extrusion. You'll have the added benefit of procedural non destructive beveling and allow easy tweaking of the character's shapes by controlling the bezier curve handles in edit mode.

If you plan on doing geometry heavy changes to you logo however, then I'd recommend a different approach and start from scratch modeling you logo as a mesh. It may be harder at the beginning, but with a good starting topology it may well compensate in the long run

Right click on it then hit R, to rotate. Hope this helps!

Not the answer you're looking for? Browse other questions tagged modeling modifiers text-object or ask your own question.

8
Letter by Letter Animation
4
Why does my extruded text go wonky like this? Why does my text go weird when I convert it to a curve?

5
How to properly rotate bevel object on a fractured beziercurve
0
Redo armature without stacking modifications?
1
Creating a bevel car decal like effect?
1
How to attach mesh object to another mesh
1
Why do I keep getting a 'No faces filled' error when using the Face-fill tool?
2
How do you wrap a plane around an object?
0
Advice on how to model this piece of a chair?