How can I export multiple animations into one .x file?

When I export my models and animations I use a .x (Direct X) format. I can see how this format could accommodate multiple animations. However, I can't get Blender to export anything other than the active action. I have my animations in different actions, as described in this question/answer.

How can I export multiple animations into one .x file? I'm using the built in exporter for .x files.

Blender has a DirectX exporter. Go to Addons in User Preferences and look under Import/Export.

Check Export Animations, this should export all the animations in your file. I would recommend playing with the other animation options as well. You can read up on each setting on its wiki page. 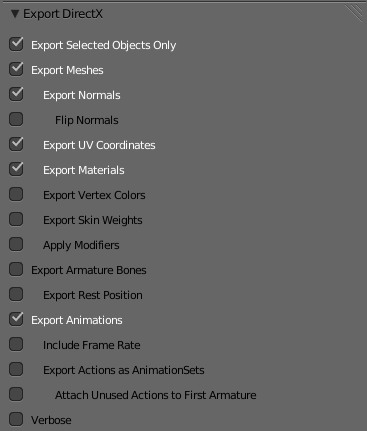 Test 1: I enabled it and made a simple scene with two animations. I exported the file to .x and opened it in a text editor and I saw the animations in there clearly labeled and with the transform locations I had used.

Test 2: I also downloaded a .x viewer called 3dmodelviewer, exported a file from Blender with over 6 animations and it loaded and played them all so the exporter works with multiple animations.

NB: In my tests, I parented primitives to several different bones. I also noticed that I had to be in pose mode when I was animating the objects, if not it doesn't work, not sure why.

Not the answer you're looking for? Browse other questions tagged animation export or ask your own question.

31
How can I manage multiple animations in one .blend file?
3
Export rigid (non-skinned) animation from Blender for consumption by AssImp