How do I properly set up a spotlight cone?

I'm having a problem while rendering a searchlight-style spot lamp (i.e. I want to see the "light cone" in the final render ("Halo" option is checked), a.k.a. volumetric light).

It appears that the cone is not actually interrupted by other objects. Simplified example for illustration purposes: 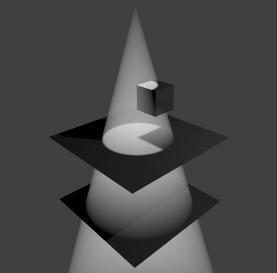 Is that a bug? If not, what would I have to do to stop the light cone from "penetrating" the plane? Note that the actual spot is only visible on the upper plane, not the bottom one. Also, if I place another object within the cone it will properly cast a shadow onto the next surface. It does not affect the "shape" of the light cone however, as I would expect...

(remainder of original text moved to new question: "Why do my spotlight's dimensions differ between rendered and non-rendered view?"

In order for the spot lamp to be blocked by other objects, you must set the Step to at least 1: 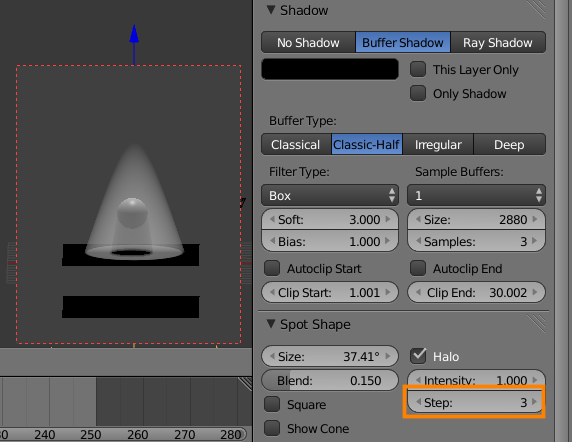 13
How to make sunbeams in blender?
7
How can a light cone (volumetric) be setup with cycles?
6
How to render a volumetric shadow?
1
Why do my spotlight's dimensions differ between rendered and non-rendered view?
1
How can i apply gobos to a spotlight to make it look like a real life moving head light?
1
How to use procedural light cookies (Blender Internal)

1
Why do my spotlight's dimensions differ between rendered and non-rendered view?
5
How to properly project a pattern from a spotlight cone?
0
How can a Diffuse material not be effected by light?
1
Spot light shows dimly through solid plane
1
Cycles having trouble calculating light from multiple emission objects
0
Cycles spotlight creates fireflies on glass and glossy materials
0
Shadows in render are noisy
1
Spotlight cone has a black frame in all views