Memory increasing but not adding any new geometry

So I have a model and in the top right where it says the memory usage it changes even when I dont add any type of new geometry. I can just say move a vert and let go of the mouse so it doesnt actually go anywhere or even just moving the object in object move basically almost everything I can adds more memory usage but I am not adding or changing anything on my model.

I can take the start up box and just go into edit model and just click on a vert and the memory goes up. I am not moving the vert just clicking on it.

Can someone tell me why this does this? Is it suppose to be like that? Does that actually reflect on the real memory use?

Whenever you execute an operator, even if that just means to select something, or deselect it, Blender needs to keep track of what you were doing by recording those actions to what is called the Undo Stack. You can think of it as a pile of commands which were run. If you press Ctrl + Z Blender will travel backwards in time along this stack so to speak. So you might be thinking you're not doing anything, but for Blender you do something :)

Think about it: How else would any application know what state you were in before, what the document or model had looked like before you performed a specific action? How would the app be able to go back to previous states, unless recording and keeping those states around?

After performing a few actions, you can see the whole stack by pressing Ctrl + Alt + Z. This will show a menu with the latest commands you executed, and allow you to choose a specific state of the model. The one with the eye icon is the state you're looking at in the 3D View currently: 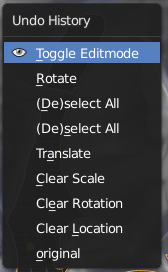 To verify this, you can simply disable the Undo Stack alltogether by going to the User Preferences, Section Editing and set the number of Undos to Zero (section marked in red): 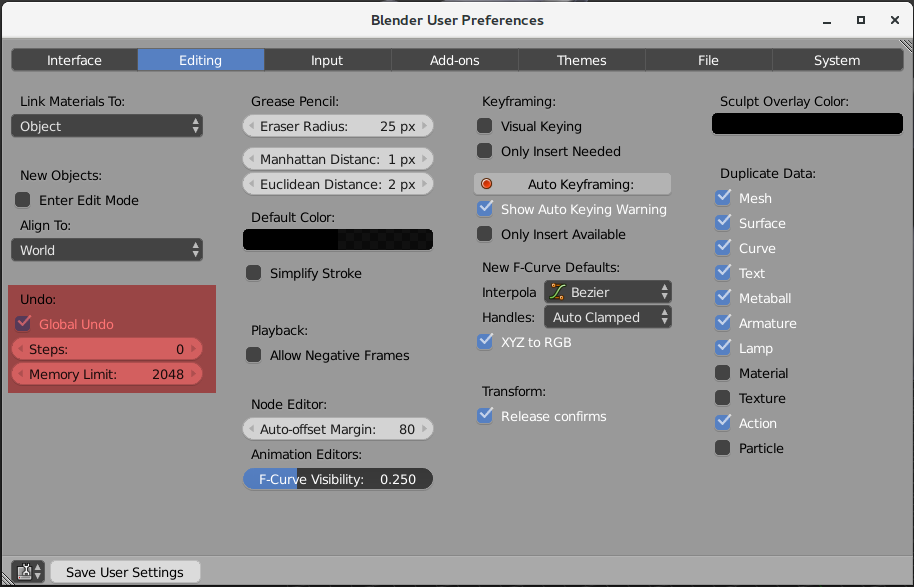 When you now perform a few actions like select and deselect, you'll see that the memory consumption will jump slightly, but it won't just increase like a one way street any longer. There will be occasions where the memory consumption actually will be reduced, depending on what you do. However, this is strongly discouraged, as you really lose the Undo functionality. You can't even undo selections any more.

The settings in the prefs allow you to set certain boundary conditions on when Blender should forget about what you did. One is the number of steps, the other is the memory limit. Both help you to tailor your personal Blender prefs towards your machine specs. The memory limit is a limit for the Undo Stack itself. So in my case, Blender is allowed to allocate 2 GB of RAM for just the Undo functionality. If I perform a lot of memory intense actions in sequence, this limit could be exceeded, and Blender would start to delete the first element in the stack, then the second, until the stack fits the limit again. Sounds complicated, but bottom line is: Blender will never use more than that, so the constant increasing of RAM consumtion stops at that point.

Not the answer you're looking for? Browse other questions tagged modeling memory-management or ask your own question.

5
Modeling a curve edge of a plane
1
Animating chain driven vehicle with rigid bodies
0
Blender cycles rendering layer but keep to sum memory?
3
Blender using memory for no reason; Blender loading up Memory Usage. Why is that?
2
Render a "long" video (> 2 mins) in one step, without running out of memory
5
How to prevent memory leakage in Blender?
1
Why does the Multiresolution leave bumps in my mesh?
1
Scene is too heavy; how to identify most 'expensive' objects