Can object parameters be set from data file?

M spheres appear moving around and rotating along N frames (all spheres will appear in every frame).

For each sphere at every frame, these values are saved in a text file, which I'd like Blender to read:

Is it possible to read this file from blender, (so that Blender will create N frames and move and rotate at each frame the M spheres with the data read)?

I can write the file with the positions and angles in the most easily format to perform this. Eg. csv file:

(where m is refered to the rotation components)

Using a data file to control position and rotation can be done using the animation nodes add-on. If this is not installed, then install it from the Git repository

To start, create a simple scene with a sphere and a plane. Add a material to the sphere so rotation can easily be seen. 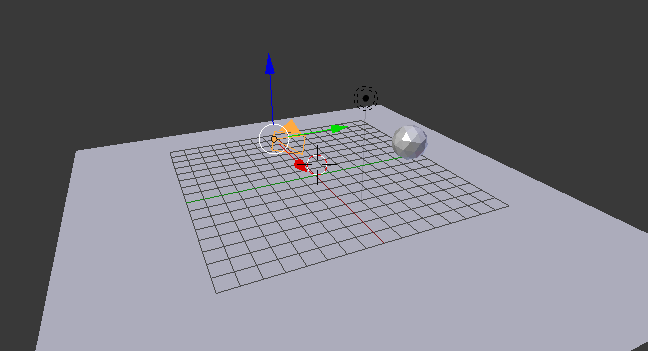 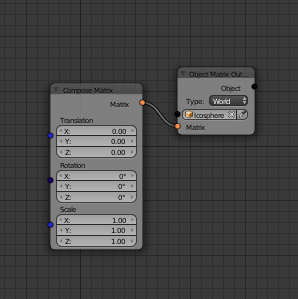 At this point, if you change any of the values in the 'Compose Matrix' you should see the sphere move, rotate, or scale. 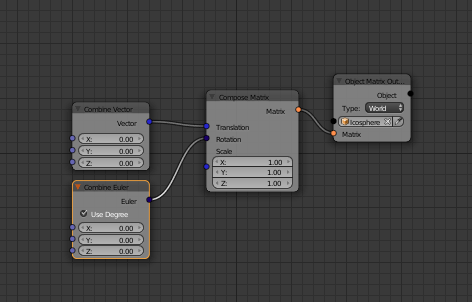 Once again, changing these values will move and rotate the sphere.

The next couple of steps will add the logic to convert a string into a vector. Add a 'String Input' node, a 'Split Text' node, a 'Get List Element' node, and a 'Parse Number' node as shown. Also 'Debug' nodes can be added to see what values flow through the node network. The 'Split By:' value should be set to ',' (a comma).

Now changing the inputs string, which is CSV separated, will change the location of the sphere.

Create the input file for location and rotation. It should look something like the following. Save it to 'sphere-1.csv' in the current directory.

The next steps will replace the string with the input from a file. Delete the 'String Input' node. Add a 'Text File Reader', a 'Split Text' node, and a 'Get List Element' node. Change the 'Split Text' to use 'Lines' to separate the text file.

This will set the x position of the sphere to the value of the 1st line in the 'sphere-1.csv' file. To animate this, add a 'Time Info' and 'to Integer (floor)' node.

To see this animation work, open a timeline panel and set the start to 0 and the end as 12. This will then only animation the first 13 lines in the data file.

If animated, the result will be the following:

At this point, all of the pieces are in place to translate and rotate an object. The next step is to hook up all of the information from the file to the object. Extend the previous network into this one.

The result of this network should be the following animation.

To animate multiple spheres, the animation logic is converted into a 'group' which has a file name and object as the input.

Add three spheres to the scene and create the three more data files with location and rotation like 'sphere-1.csv'.

Add a 'Create String List' node and populate it with the files names with the data for each sphere. Add a 'Create Object List' node and populate it with the name of each sphere. Add two 'Get List Element' nodes. Add a 'Loop Input' node. Connect all of this so the 'Loop Input' is used to specify the 'Index' of the object and data file for each iteration of the loop. Finally, add a 'Invoke Subprogram' that points to the loop and has 4 iterations. The part of the network is shown below.

The entire network is shown here:

By adding more data to the input files and setting the last frame in the animation larger, an animation like the following is generated.

This blend file can be downloaded here:

Not the answer you're looking for? Browse other questions tagged animation scripting import animation-nodes or ask your own question.

41
How can I manage multiple animations in one .blend file?
1
Create a file that contains object *and* movement data that can be imported to Blender
1
Inverse Kinematics - saving, loading file and showing animation in BGE
4
Convert CSV Latitude longtitude to Blender coordinates
0
How to animate a set of 2-D data points described in a csv file?
3
Script for save camera position, to file
4
Input 3D line segments from real scientific data
1
Can I animate a mesh using raw vertex coordinates per frame?
1
Animating a dynamic amount of objects from CSV data using Animation Nodes