I was following a tutorial on rigging (was pretty much done) and now my entire model keeps spinning around the main root bone if I try to move any bone at all. (first picture is where it originally was and still is while in Rest Position, second image is of how it changes when in Pose Position while in Pose Mode or Object mode, Edit Mode seems fine)

I tried clearing All Transforms or hitting the ALT+g, s, r while all were selected and that just caused it to spin in the same direction like everything else does as shown in this picture:

I was nearly finished with this video tutorial here, https://www.youtube.com/watch?v=QbHAqk7OALw and near the last part my issue began. 2:28:07 was the last time I was in edit mode and the pose was fine. Right after the little turrets he then went and parented 3 more bones and then he switches back to pose mode with no problem, I suspect somewhere in there is where the problem occurred on my end. I could have sworn I followed it correctly but maybe I went wrong somewhere I have no idea.

I couldn't find another issue like mine exactly so sorry if this question has been asked before, I'm still very new.

Edit: I checked in the video comments to see if it had happened to anyone else but I did not see any mention of it unfortunately.

Edit2: Picture for more detail on the yellow lines.

This spinning effect many times is caused by an incorrectly set up IK constraint. Please check the Tutorial again for two things: 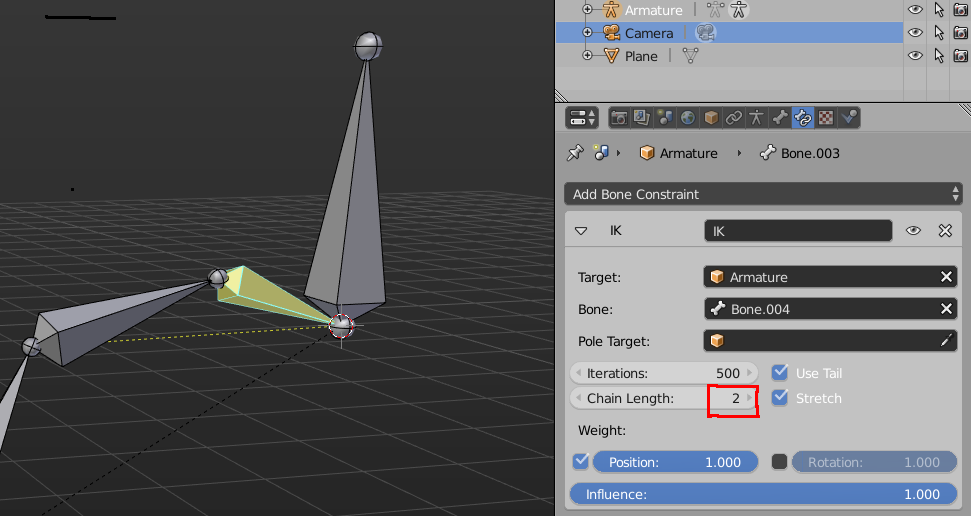 As an add-on to Aliasguru's answer, you may have a generic cyclical dependency that your IK modifiers are running into. You can confirm if you do if you go to Windows -> "show console". This option only appears to work on Windows machines, however.

If you do have a cyclical dependancy, you will get an error like

If you do see this error, think about how to break the cycle.

Not the answer you're looking for? Browse other questions tagged armature pose-mode or ask your own question.

1
How to copy data from one armature to another POSE MODE
3
How to put all armature bones under 1 root bone
0
How to recalculate bone roll in action keyframes or in pose mode
0
IK-constrained bones change position in the pose mode
0
Armature pose position is different orientation from initial layout in edit mode, and automatic weighting problem
1
Apply armature changes to mesh so that both the mesh and armature look the same in pose and edit mode
0
Is it possible to save pose to model