Cycles GPU CUDA out of memory - How to identify the problem objects?

Rendering a large environment scene (also with multiple smoke and physics simulations) in Blender causes my GTX 980ti to run out of CUDA memory. (I've baked all the simulations but am unsure if this makes a difference to memory in rendering)

Is there a way to identify which particular objects / materials / textures / simulations are using up the most amount of memory?

As far as I know, there's no automated tool to identify the resource hogs in your scene. You'll need to do most of it manually. But surely you'll have an idea on what object / element could be the cause? Like, high res textures, dense meshes (check subsurf and multires modifier render settings too!!), lots of copies instead of instances, or fur / hair.

One possibility is to put those objects on separate layers, and render just that layer with very low samples (1 should be enough). The memory consumption can then be read in the debug print line on top of the render view.

Important: Use final render (F12), as many modifiers (like the Subsurf by default) have higher settings for final render than for vieport render.

For rendering animations, it might also be beneficial for debugging this to have the memory usage in the test render frames directly. You can enable Stamp Output and check Memory to do so, if you have Blender 2.78 (or a current development build which was compiled after Jul 14, 2016): 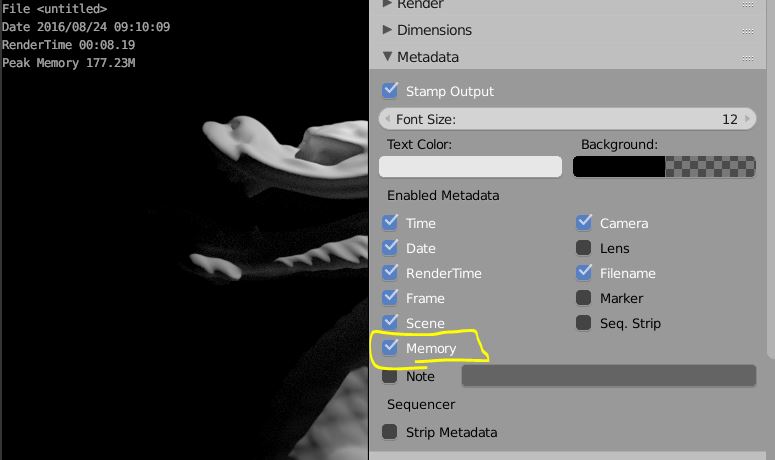 put those objects on separate layers, and render just that layer with very low samples (1 should be enough). The memory consumption can then be read in the debug print line on top of the render view. Important: Use final render (F12), as many modifiers (like the Subsurf by default) have higher settings for final render than for vieport render.

This method was helpful, I identified some large memory objects and found some larger than needed textures, lowered the image size of these and lowered some subsurface modifiers from background objects (such as rocks) and now have it rendering on the GPU! Thanks!

A hugely overlooked feature is the simplify section in the scene panel. Too many subdivisions globally can cause memory crashes and it can be hard to find where the highly subdivided objects are in scenes with several objects. Make sure the render section is set to no more than 2 or 3 subdivisions. For most purposes, this should suffice and prevent memory errors.

2
Do high end cards have better rendering performance?
0
Cycles Cuda out of memory on final render but not on preview
0
How can I render a very large image in cycles?
0
CUDA Error: Out of Memory in cuArrayCreate(&handle, &desc)

11
Cycles / CUDA Error: Out of Memory
5
Cycles memory problem
2
Blender runs out of memory while rendering fabric hair on GPU
0
Cycles/ CUDA out of memory (sometimes)