Texturing an object with array and curve modifiers

guys!I'm currently working on this model of the Great Wall of China and it will be used on a 2D mobile game map, so it's not necessary to be too detailed. So I made a segment of the map and put there some seams.Then used the array and curve modifiers to spread it across the whole map,but my problem is that it's too obvious the textures are repeating.

Do I have to enable to modifiers and then proceed with the textures and the node setup.

Is it possible to make it shift hue or saturation randomly between some values for better realism.I'm also planning to use different textures on the walls and I'm wondering how to make a good blend between the different textures?

Here's a screenshot of my render preview with just diffuse textures. 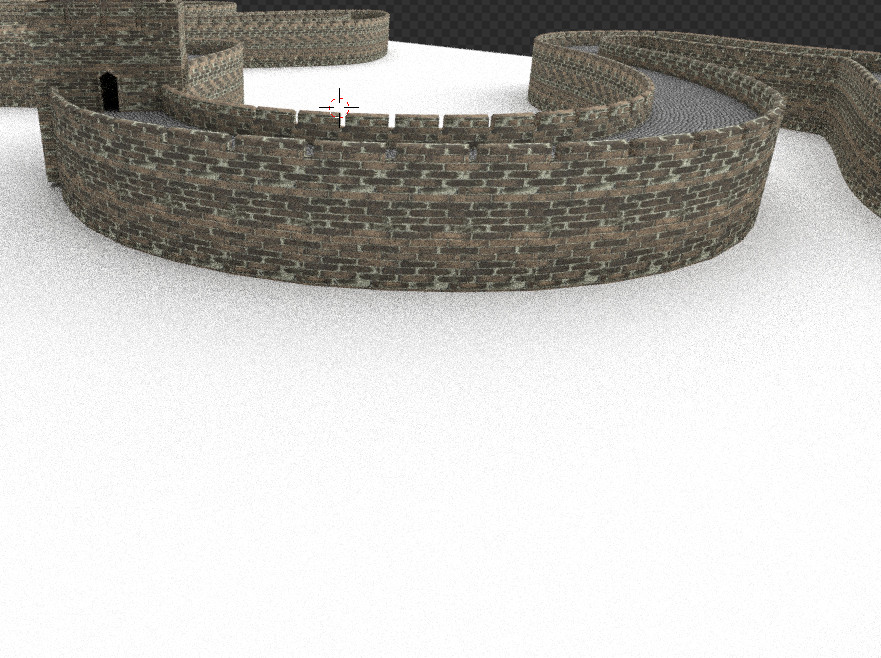 Using a more regular brick texture will help to avoid the repetition effect.

From that you can mix the texture color with another element, either using a hue variation (as you suggested) or another texture or "many other possibilities" (several textures, for instance some vegetation or dirt, etc.).

But hue is hard to restraint to 'good values'. Here we are around a value of 0.5 more or less 30% depending on a noise texture.

The hue effect is localized by a musgrave texture and a tuning via a color ramp : 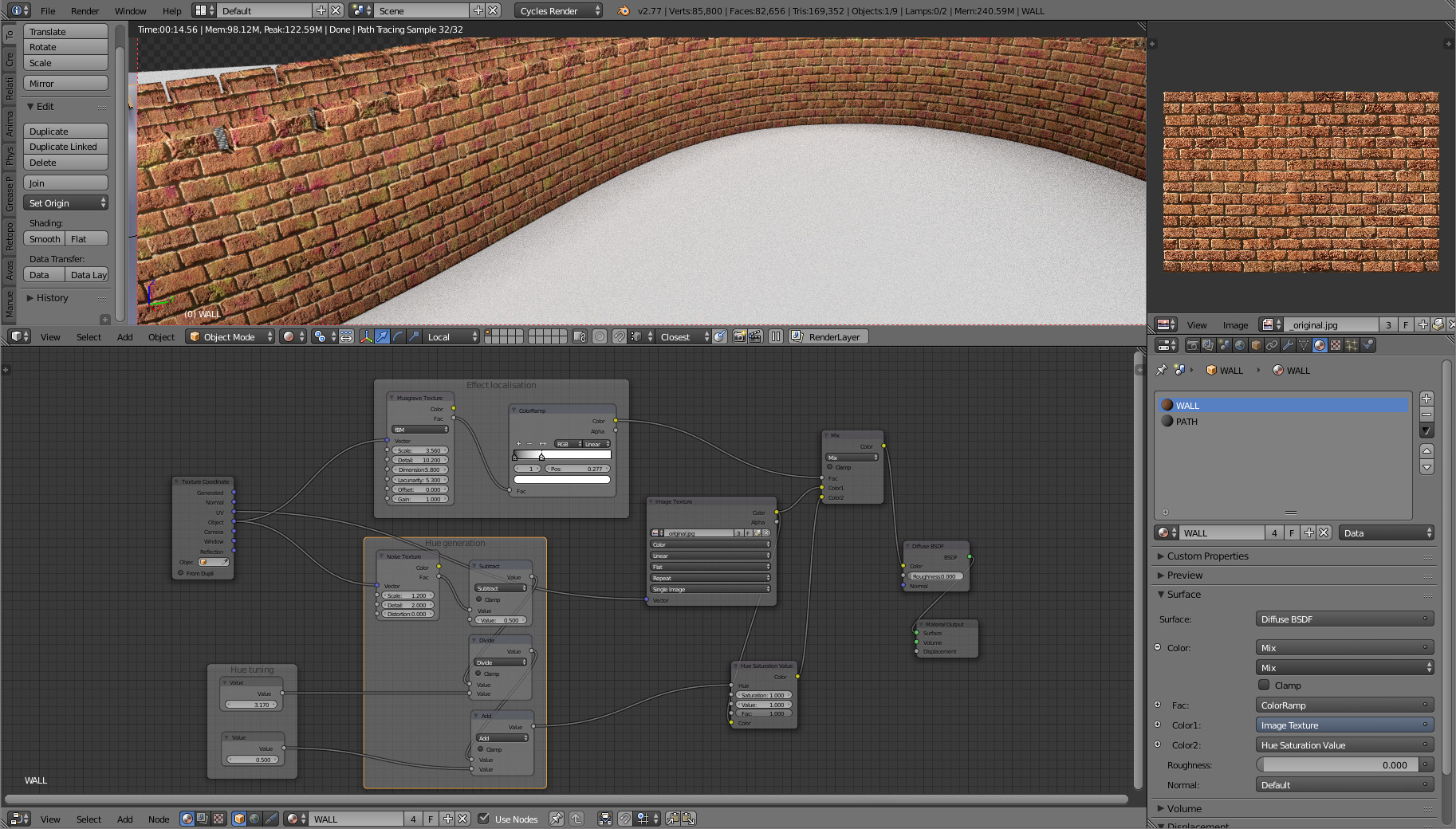 Here a moss texture is used. This is the same principle. I have chosen here a noise texture to localize the effect, but again this is just another basic example : 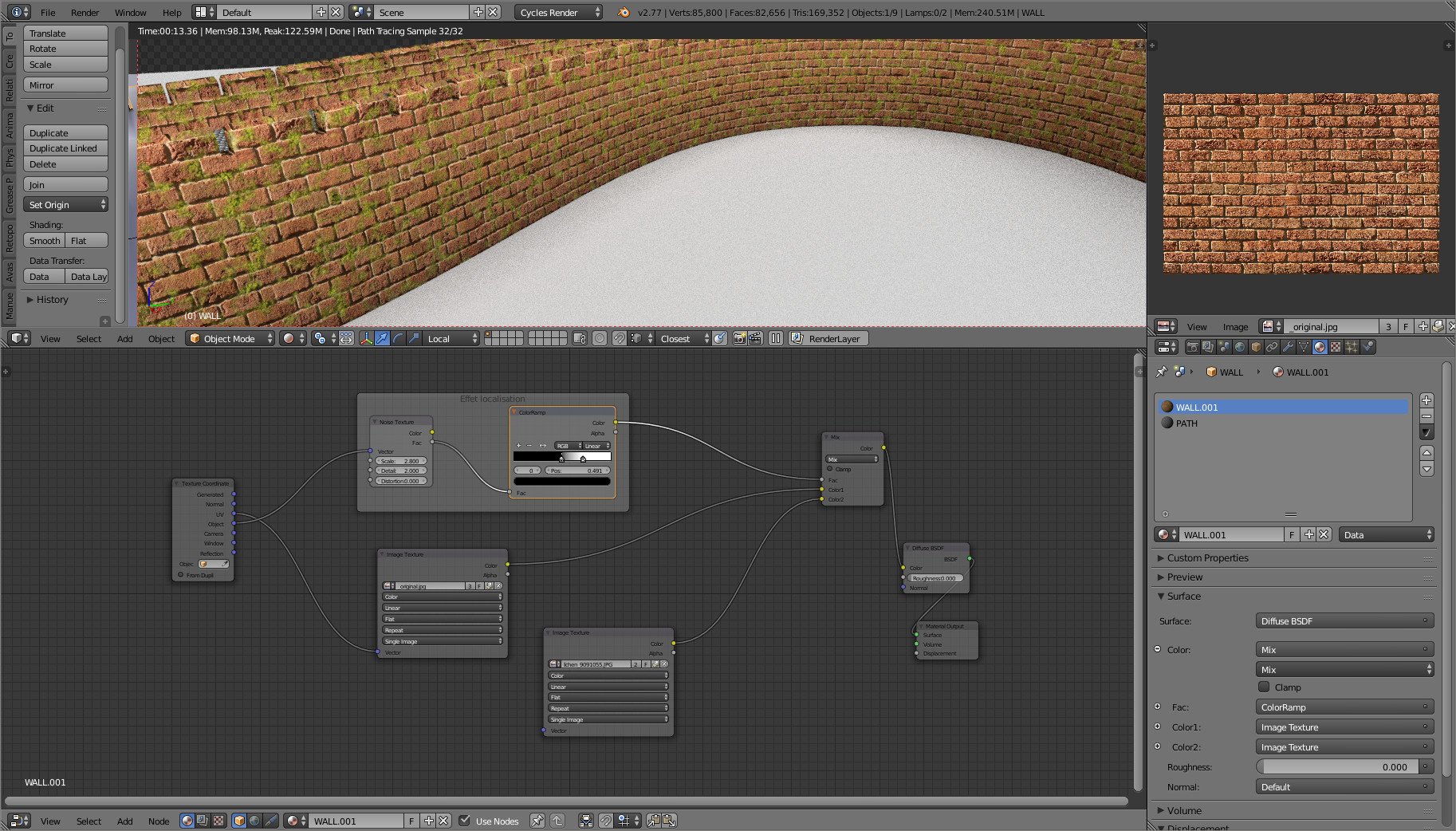 One of the most common problems with tileable textures is that it's not only the color variations but also the patterns that create the repetitive look.

While your idea to change the hue and saturation values might work on a model that uses real bricks instead of textures, it would probably disturb the seamless look of your model. You would change the values for the whole segment which (depending on your model's mesh) would most likely produce vertical lines between them.

Depending on how much effort you like to invest in that particular task there are two approaches.

The first one is obviously to choose a different texture that is still tileable but hasn't the distinct features that make the repetition so obvious.

The second one needs a significant amount of work but then you might re-use the resulting textures for a different project. You would have to create three or four tileable textures yourself and they should be each tileable to all the others.

There are some tutorials about creating tileable textures in Blender, some really good ones can be found on stym's youtube channel.

The trick would then involve changing only the inner area of the texture while the outer area stays the same. You should also avoid putting too prominent features over the edges, since they would ruin the randomness again.

The next step would be creating several materials for your model, then apply the modifiers, then select random segments and change the material to a different one.

10
How can I give an array of objects a variety of colors?

3
Local rotation with array and curve modifiers
1
Can you repeat a portion of a texture across a face?
0
Blender Old UV applied on top of new UV
1
Modifiers array and curve
0
How to make textures certain size and constant between objects?