How can I remove artifacts from a flat surface after using a boolean modifier?

I tried to model a simple keypad, I got this model after using a boolean modifier on an array of cylinders and a cube:

The face of the cube had way too much edges and as suggested here Cutting hole into a face with a line loop? I used limited dissolve and got this: 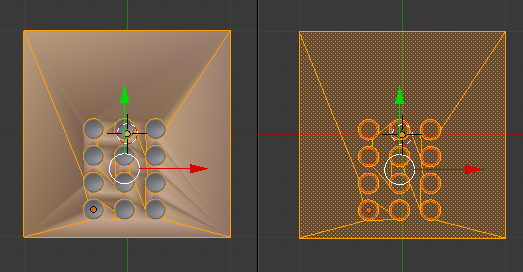 What would be a good way not to get the rendering artifacts on the plane? 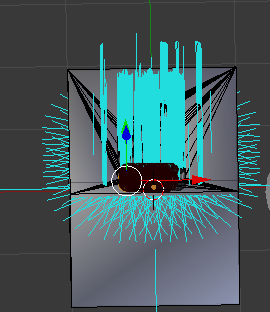 Along with using Shade Flat, you can still smooth shade your model and use an Edge split modifier. See How to smooth shade an object while retaining hard edges? for more info. If your model is faceted or not exactly flat, using shade flat will keep the hard edges but smoothing and using this modifier can get around that.

Note that you can also set specific faces to flat shading while keeping others smooth shaded. 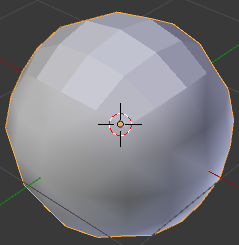 This is useful in case you don't want to use the edge split modifier.

EDIT: Based on the comment (and the update) it seems like pinching is much more likely than backward normals. Oddly shaped polygons can be difficult to render in OpenGL, but they often look okay when fully rendered (per-pixel shading, versus vertex shading).

The artifacts are actually unrelated to the question about holes in faces. The artifacts are a consequence of surface normals that aren't all facing the same direction. In the 3D viewport, tab into edit mode and press n to open the settings panel. There's a section in that panel marked "View," where you can turn on "Draw Normals" (there are two buttons, one for vertex and one for face, you want face normals). This will make blue lines that show the direction each face normal is pointing. They need to all point the same direction. If you find a normal pointing the wrong direction, select that face (face select mode is easiest), press ctrl-f, and select "Flip Normals." Repeat this process with each incorrect face until all the faces have normals that are pointing the same direction.

As for the "best" method for putting holes in a plane, that really depends on what you're doing. The method you're using here is a common one, and if the artifacts are the only problem, then it is probably "best."

3
Fixing a complex boolean messy mesh
79
How to smooth shade an object while retaining hard edges?
9
Cutting hole into a face with a line loop?
6
Remeshing part of a mesh

0
Can't bevel - Invalid boundary region to join faces - edge dissolve
3
How to cut a hole in a subdivided mesh?
0
why boolean not work on solidfy modifier
0
Modelling complex, planar faces (from imported DXF)
2
Boolean modifier with complex object (hole punching) makes blender go on its knees
0
Cutting heart shape in a mesh
2
How can I create a boolean mesh to replicate the movement of a milling bit?
4
Intersecting Three Cylinders
0
Boolean difference operation and bevel problems in blender 2.9