How to determine right vertex count for mesh?

So i'm back with another stupid question about low-level 3d :D I'm writing addon that will count the number of vertices that is needed to render the mesh say in Unity.

For now i've decided to first count how much normals re there on every visible vertex, so this unique normals would be the number i need.

But UVs add verts too, so i decided to count all the UV verts, subtract number of visible verts and add this number to total count (normals).

That worked fine for simple and complex meshes and i was happy. But now i've created another model and addon failed to count right number.

After investigation a narrowed the issue down to that thingy (see below). It is mesh with smooth shading. Blue - hard edge, orange - uv seam.

My addon shows 13 verts for it and it is right according to its algorythm. But there are 14 verts, because 4 separate polygons would be drawn.

So i'm stuck because i totaly do not know how to get such information from blender api (and actually i don't know what information i need). Anyone familiar with this can advice me something useful? 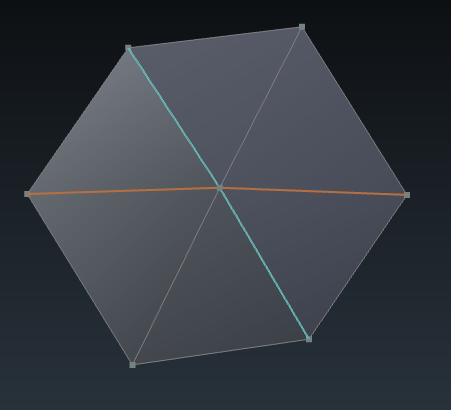 List of objects in scene with counts (verts, faces, tris)?

I think a suitable solution can be found here. They use a len method which I'm sure might be useful in your case.

Not the answer you're looking for? Browse other questions tagged python scripting uv or ask your own question.

13
List of objects in scene with counts (verts, faces, tris)?

0
How to make this script to quickly set specific weights? (Screenshot attached)
2
How do I get per-vertex tangents (and bitangents) in my export script?
0
How can i disconnect part of mesh, reconnect it to another part and make it a part of different UV island?
1
How to add vertices into specific vertex groups
0
python : creating 4D simplex by connecting all vertices with ever possible triangular face
1
I want to Transfer Weights from a Vertex or Multiple Vertexes one VG to Another in the Same Mesh Object using Python
0
How to get a label in the ui panel, with the bpy.data.materials count?
1
Is there a way to find out the last user operation using Python?