I'm using Blender 2.68 to create a first person simulator of an astronaut floating around a space station. I'm using WASD to move the camera up, down, left and right and the arrow keys to rotate it.

The problem is as soon as I take my finger off the key the movement stops dead. I want the camera to continue moving after you let go of the key and then using the opposite direction key to slow down and eventually stop and then move in that direction the longer you hold the key to simulate realistic anti gravity movement.

If you want 0 gravity movement for your character, The first step seems rather obvious: turn off the gravity in your scene. To do this, open the world settings, and set the gravity to 0.

Great! now the scene has no gravity.

But we have a problem - the objects stop moving completely. that should not happen if we are simulating space. This is done by blender as an optimization. Essentially, when blender sees that an object is going slow enough, it just halts it's position (stopping the calculations for that object, freeing up processing power.) Once another object applies a force to the "sleeping" object, the physics calculations will resume for that object. We don't want that, so check "no sleeping" on all objects you want to continue moving indefinitely. This is perfectly fine to do on a few simple objects, but Beware - doing this on a lot of objects or a few more complex shapes could potentially eat up a lot of processing power.

These results are much closer to what we want - but we still have have a problem. The objects are slowly decelerating. Why? This is because of the dampening on each object's rotation and location, set by default. This dampening is normally to simulate air resistance, which adds to the realism on most games. We don't want that resistance here, so we can also set the dampening to 0 on the character. (Here I'm setting the dampening to 0 on both example objects, do this for all the objects you don't want to slowly lose velocity.) Changing or eliminating the angular or linear dampening should not significantly effect performance.

Now we have (for this question's sake) realistic 0 gravity movement. Now to add thrust. This is actually simpler than it might sound.

All you need is a logic setup like this. 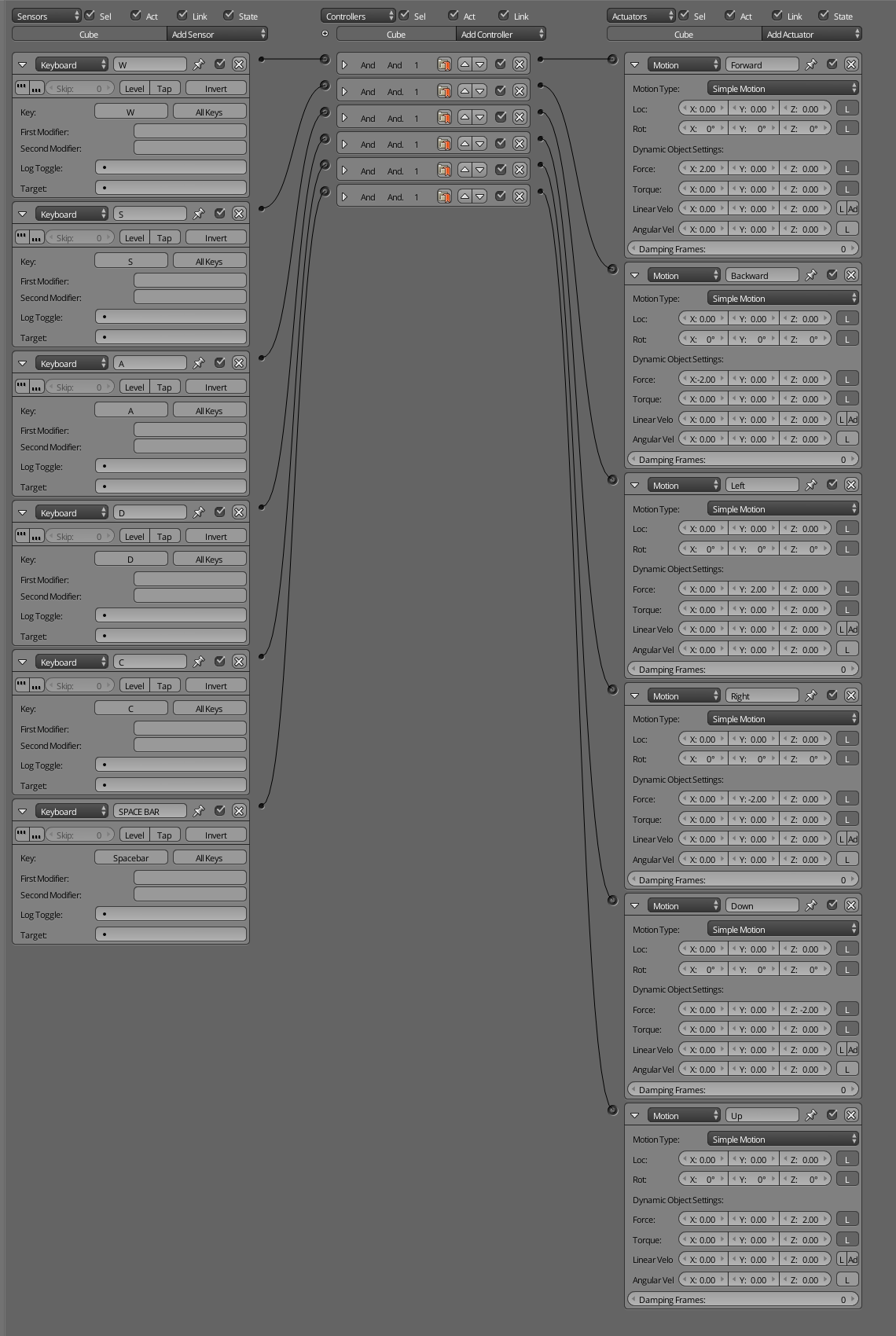 (The X axis is forward on this example object, which is actually bad practice - it should be the Y axis. adjust your logic setup depending on which direction is forward on your character.

This setup ignores the rotation of our example cube, it only controls linear velocity. To make it work with rotation, simply use a similar setup, but influencing torque instead.

1
Blender Game Engine python loop issue
1
bge mouse move camera
2
Have object rotate when player does
3
Camera track to constraint in the game engine
1
A moving object responds very slowly to gravity
0
Is it possible to use local and nonlocal forces simultaneously using bge?
2
How to make an object point in its movement direction? (BGE)