We know that the there is an Object Offset option for Array modifier, but when trying to make a circular array with that offset object as the center of the array circle, it always doesn't behave quite like what's expected. So how to make a nice and controllable circular array?

P.S.: There is an old trick on CGCookie about moving the object's origin. I wonder if there is any way to do this without changing the location of the origin. :) 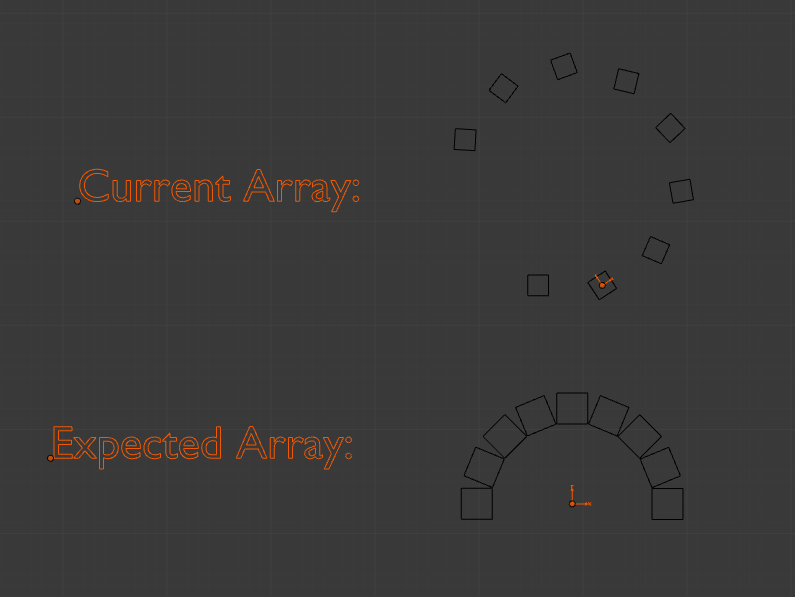 Add an empty at the origin of the object that you want to duplicate. (Remember to hit CtrlA and select rotate and scale, to apply transormations on the original object). Then, add an array modifier with object offset linked to this empty.

Set the 3D cursor to the desired centre of the circle. Add another empty here. Make it the parent of the other empty. Now select only the centre empty. Rotate. The amount of rotation is of course dependent on the number of objects, e.g. 12 objects = 30°.

If you want the single elements to "touch" as in your picture you need to either adjust the object width or the radius. The circumference of the circle is 2 * PI * radius, so the width has to be the nth (e.g. 12) part of it. (Or, if it is not about absolute exactness, it can be done visually.) 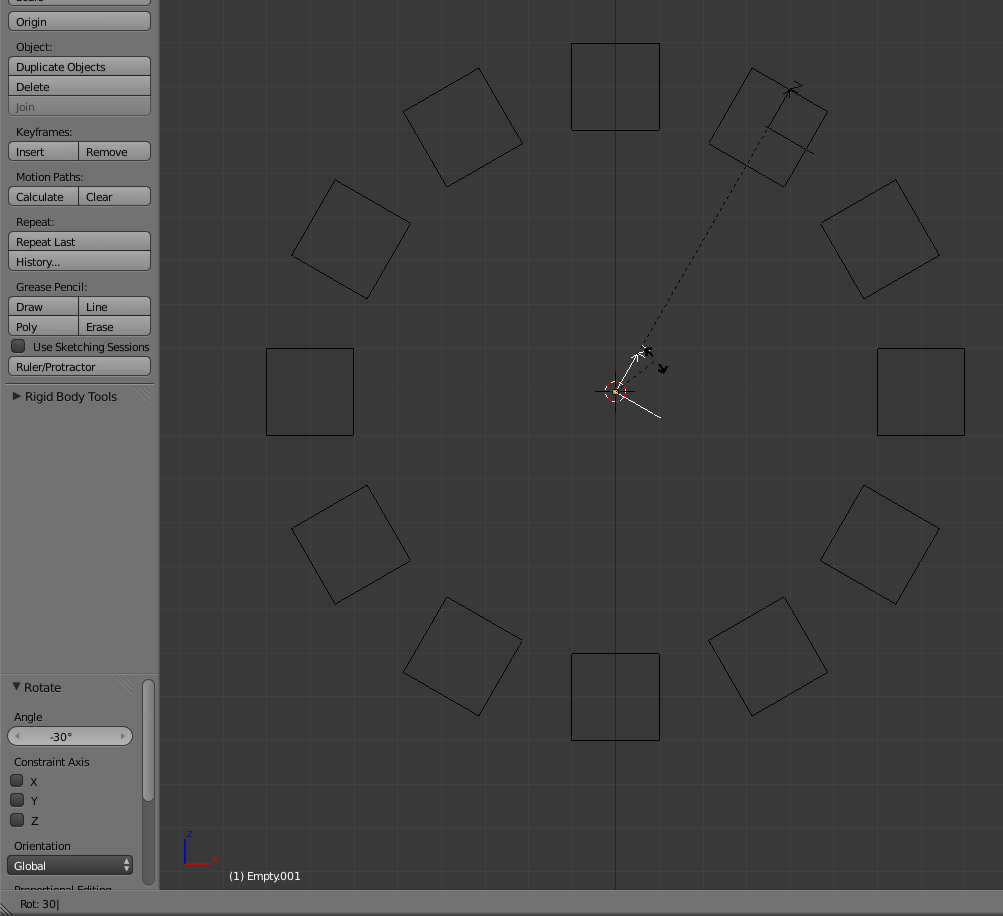 You probably want to parent the object to the centre empty.

This circle is "controllable" as you can simply change the angle by rotating the centre empty.

Just want to complement with several tricks that I just figured out. They all share with the same idea - to offset the rotation pivot of the Offset Object:

First, use an empty object in Object Offset section in the Array modifier setting, then, all you have to do is to rotate the empty object, instead of the arrayed object itself: 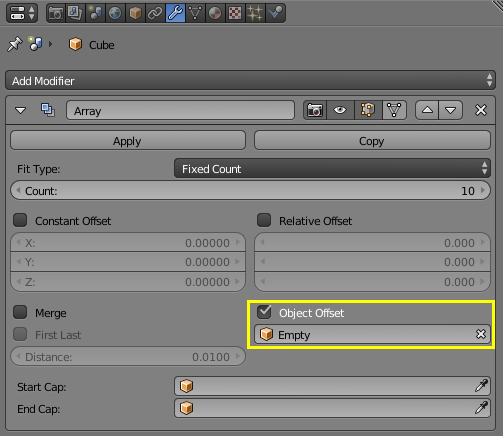 Using another object as rotate center.

Note that this variant uses two empties; one at the cube center (just like Variant 1) and one for the pivot point (replacing the 3D Cursor in Variant 1).

To do the actual rotation after setting the Active Element as Pivot Point, first Right-Click the empty at the cube center to select it, then Shift+Right-Click the pivot center empty to select that as well, then R to rotate.

There is a method that actually doesn't require an array modifier:

First figure out how many objects you need, then divide 360 by that number and you have the amount of degrees between each object. For this example, I use a step value of 10 degrees for 36 objects.

Then place the 3D-Cursor in the center of rotation and set the pivot point in the header to 3D-Cursor. 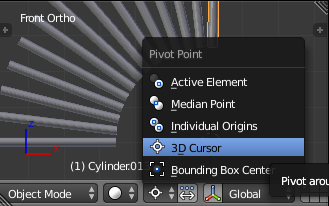 Select your object, duplicate it with SHIFTD and then without even confirming that hit R10RETURN.

That way, Blender considers duplication and rotation as a single action, not two.

You can now use the repeat hotkey SHIFTR to create a full circle of objects and they will be rotated evenly around the cursor.

You can use ALTD to create linked copies instead of SHIFTD if you want to save a bit of memory and filesize. All objects will then use the same mesh.

The advantage of this method is that you have ready to use objects which keep their axes and you save the time for setting up the modifier.

People have been struggling with Leon's answer. Here is how it works (I'm using default blender scene, with 3D Cursor placed at the origin):

I used blender once to create so called Venetian blinds with an array modifier. To keep rotation of the array objects around there individual origin, I rigged the object to use with the array modifier to a single bone in the center of the object. When you rotate this bone, each object created by the array modifier will rotate around it's own center.

2
How to place columns in a circle?
1
How to complete a circular shape using an array modifier?
1
How to create a circle with the Array Modifier
1
how do you spin-duplicate an object to make a grenade?
0
Array modifier not working as expected
1
array of cylinders around sphere surface (sea-urchin-like)
0
How can I use the Array modifier correctly?
52
Why is it important to apply transformation to an objects data?
14
How can I model Gothic style windows?
9
How to distribute objects in a circular pattern on a surface (Radial Array, Polar Array)
See more linked questions

2
How to align polyhedra face to face in an array
2
Multiple array modifiers and object offset rotation
1
Rotating Array Modifier applied to a rotated object issue
1
Rotated array modifier around constant origin?
1
My circular arrays don't array
1
How to arrange objects around the center of a circle?