I just started using blender a few days ago and I've been tinkering around with simple armature models. In previous attempts, when I wanted the armature reset, I would do the Alt-G,R,S combo or 'Clear Transform' but now it doesn't seem to work. Is there an alternative option to explicitly replace the pose position with the rest position?

Edit: Nvm, just found out that the difference between resetting the "Pose Position" and "Rest Position" is that "Rest Position" doesn't take into consideration the effect of the IK constraints.

In the properties panel, under the armature settings you can reset the pose to the rest position by selecting "Rest Position." 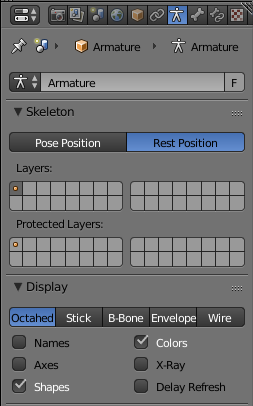 Enter pose mode, right click to open the pose context menu, and select "Clear User Transforms." In its options make sure "Only Selected" is unchecked. This will clear all pose on the armature, including unselected or hidden bones. 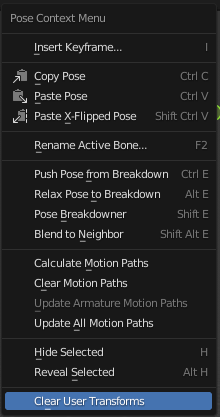 Not the answer you're looking for? Browse other questions tagged armature transforms or ask your own question.

5
How do I resize an armature without ruining its poses?
1
How to stop independent actions on multiple armatures from fighting with each other
0
How to Make Pose Position same as Rest Position
0
Armature pose position is different orientation from initial layout in edit mode, and automatic weighting problem
1
Shape key driver posing affects the resting pose?
1
How to make clothing and body move as one?
1
Apply Pose as Rest pose doesn't work