What's the relation between Cycles' sampling pattern and the pixel filter?

What is the link between these settings?

More specifically, this is my understanding of what the two settings mean:

I hope my understanding about these is more or less correct. Now my question, more precisely, is: 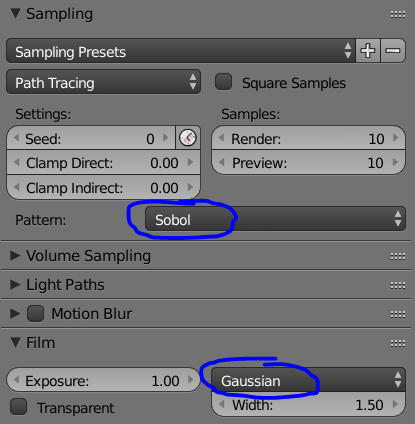 What is the link between these settings?

The Pixel Filter randomly changes the coordinte of every sample with the given distribution, meaning for example: When the Sobol Sampling Pattern samples near the edge of the pixel, the neighbouring pixel might be lit instead with a rather high probability. This is used to get rid of aliasing on the sharp edge of very bright objects, like mesh lights.

Look at these examples with a mesh light with a strength of 100. You can see the noisy Gauss distributed white dots during the whole sampling process.

Gauss with width of 0:

Gauss with width of 2:

With more samples the last two would both result in a smooth image. The higher the width of the Gauss the less antialiasing you get, but at the cost of loosing some sharpness.

Actually, this is a not a bad idea, but I never heard of any renderer doing this. Convoluting the Sampling Pattern with the Pixel Filter and using the resulting function as the new Sampling Pattern should result a render that converges to the same image.

This is however not desired probably because being able to separately choose these two functions rather than from a huge list of all possible convolutions is better. And the common Pixel Filter functions are used in other type of renderers, where sampling is done over the whole image rather than pixel-by-pixel, and one sample really lits multiple pixels, which is not stochastically sampled but fully calculated, like LuxRender.

Given the i-th columns k-th pixel indexed from 0, the Sobol Sampling Pattern gives a uniform pseudo random 2D vector (x, y) inside the [i, i + 1) x [k, k + 1) set, which is the mathematical notation for the square of the pixel. The rendering engine traces the related direction and returns with the color. The Gauss Pixel Filter samples a Gaussian distributed pseudo random 2D vector (dx, dy). The pixel containing the (x + dx, y + dy) vector gets lit with the traced color.

Probably this is done in Blender.

Given the i-th columns k-th pixel indexed from 0, the Sobol Sampling Pattern gives a uniform pseudo random 2D vector (x, y) inside the [i, i + 1) x [k, k + 1) set, which is the mathematical notation for the square of the pixel. The Gauss Pixel Filter samples a Gaussian distributed pseudo random 2D vector (dx, dy). The rendering engine traces the (x + dx, y + dy) related direction and returns with the color. The original pixel gets lit with the traced color.

Why these result the Same

For every x, y, dx, dy where (x, y) is contained in the i-th columns k-th pixel pixel and (dx, dy) is a possible outcome of the Pixel Filter, the events below have the same probability:

These events have the same probability because all Sampling Patterns have uniform distribution and all Pixel Filters have a symmetrical distribution.

This means that both possibilities converge to the same image.

I am interested in the topic and I try to understand what you are saying about sampling and using Gaussian-Sobol convolution. If I get it right, number of points (x,y) are randomly sampled within the pixel using Sobol sampling, which is one of possible sampling patterns. They are traced, get some color value. I assume this value gets assigned to location (x+dx, y+dy) instead, where (dx,dy) - Gaussian noise. And this is called a pixel filter.

And if I am correct all samples within a pixel get combined using e.g. Gaussian weighting to get the final pixel value.

Now if you instead apply Gaussian noise to the location first and then trace (x+dx, y+dy) you won't get the same value. So I don't think you can combine these operations, unless you also average over samples outside the pixel when computing pixel values (and don't average over other stuff that got into your pixel from neighbouring ones). But maybe there are reasons to do it this way and not the "inverse" way. The inverse way samples that were dropped outside the pixel will get very low weights if also use Gaussian when combining them.

I am actually very new to this stuff, I think my answer is right, but sorry if I misunderstood something.

I think sampling pattern is literally just the order your tiles get sampled in and does not relate to the blur itself.

15
Relation between Fresnel IOR and Layerweight blend?
2
Where is the implementation of the Cycles image-nodes sampling?
27
What is the difference between Sobol and Correlated Multi-Jitter sampling patterns?
1
Relation between BI and Cycles lamp energy/emission values?