That's me again, struggling with the animation. I created a number of key frames. However, my camera sometimes was doing a full 360 loop interpolating between two close camera positions. So I had to add more and more key frames to stop it. But in the end I have just one odd frame 114, where it suddenly jumps. In the "Transform" panel under "Rotations" I have "Quaternion (WXYZ)"). All the components of the quaternion are quite small and change its sign between these two frames as I see in the "Transform" panel.

Deleting the key frame 113 causes the camera to roll all over the place again.

Is there a way to stop this behaviour? I also found some posts talking about parenting when creating animations, but I can't understand it exactly.

I checked how it looks in the Graph editor, but rotations are smooth and no sign change at that frame 114. So as far as I understand Graph Editor has rotation in local coordinates, while the transform panel in global.

The animation is here (model from blendswap, made by TheDuckCow):

Here is an example. This frame is fine. 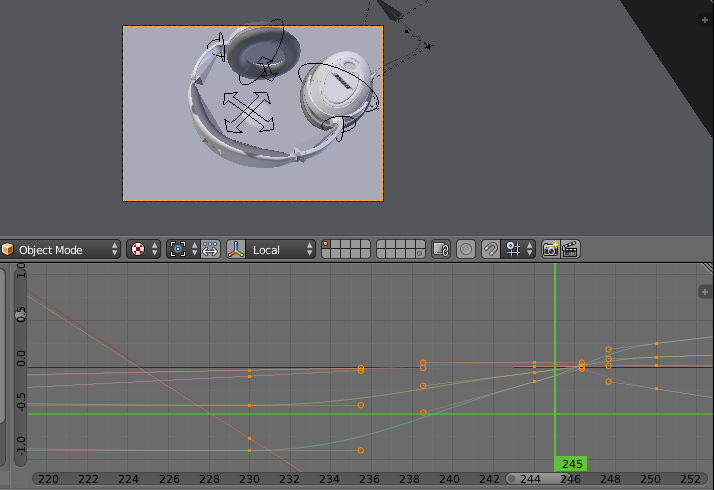 But next one is not: 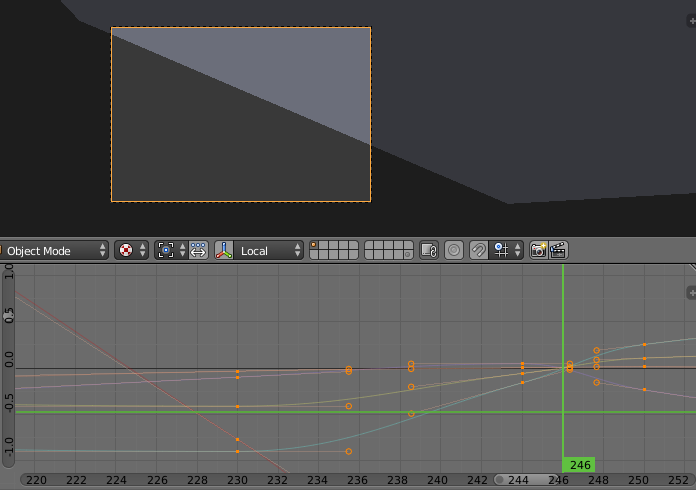 Then next one is good again. 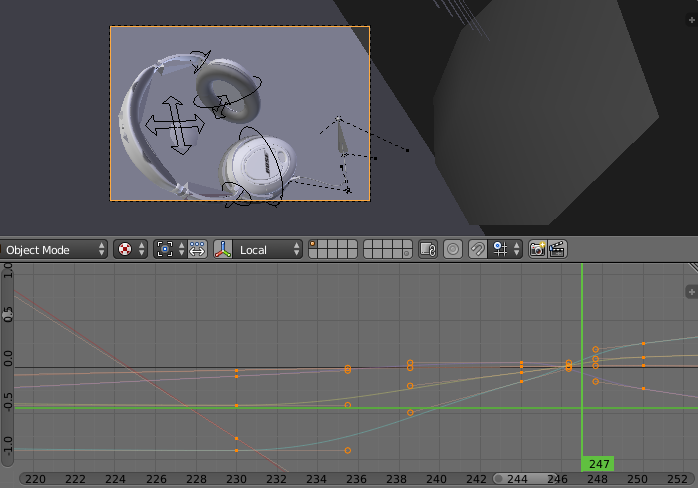 Apparently something numerical happens when they all go through zero...

This is what happens if I run the script:

Quaternions must be "normalized" in order to represent an actual orientation. That means 1=w*w+x*x+y*y+z*z. Fortunately this gets handled for you, and much of the time the result is close enough to what you want that you don't even notice a problem.

However, if the animation system interpolates a value where all of them are zero, then it probably gets changed to <1,0,0,0> . The only way to solve that problem is to add a keyframe that has the intermediate orientation, preferably in a normalized form.

What I found so far: Quaternions q and -q represent the same rotation. For interpolation to take the shortest path one has to choose the quaternion closest one to the previous frame (either q or -q). If rotations q1 and q2 are close to each other as rotations, but are positioned oppositely on the sphere, than intermediate frames from q1 to q2 will basically travel a full 360 degrees.

This script goes through keyframes and inverts quaternions if necessary. After running the script one has to press "T" in the F-curve view and choose interpolation type (Bezier), because it looks weird otherwise.

Not sure of this is too simple and therefore "I'm not understanding the situation", but when I get interaction problems of this nature I parent cameras on an invisible object such as a plane, and if necessary, parent that object to another. That has solved similar problems I've had with complex movements in several axis at once. Each dummy object can be moved/rotated independently and at any time without interfering with the other dummy(s).

The camera can also be moved independently, all of it ending up smooth and seemingly without restriction as to the number of simultaneous transformations.

3
How do I ensure a sequence of quaternions from matrix.decompose() is continuous?
2
Interpolating continous rotation

5
How do I animate influence of follow path
11
What is the best way to animate the camera path?
5
How to get automatic keyframing to work with the VSE Transform tool add-on?
3
Follow Path interpolation problem: numerical instability?
0
Timeline keyframe not showing when changing to different transform rotation representation
0
Animation & Complexity of Graph Editor
0
F-curve modifier animation - whole values only
1
Animator Glitching when skipping from one key frame to another
0
Python - Linear interpolation before keyframe