How could I make this sort of texture using nodes as opposed to assigning materials to faces? 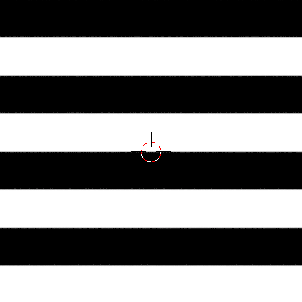 Specifically, I would like to be able to scale this in a Node Group.

Shady's Answer works only in this scene and not only in all,So you will have to edit values per scene.

And that's why I prefer using some math Instead.

To get information about our object we will use the texture coordinates node,and use Generated coordinates.

Suppose you want the strips to be vertically,then you should use the Z axis only of the coordinates and that is by using Separate XYZ node.

Now let's do the math,I will first multiply the Z axis by a variable integer which is equal to the number of black or white strips.

Then I will Modulo the result by 1,Which means I repeat the gradient every 1,and since we multiplied the axis by "say 5" then we will repeat 5 times.

Now we have a number of gradients,I will limit them to be either white or black using Greater than node.

Which will produce the following result:

I can group it and expose the variable,and we got our node group: 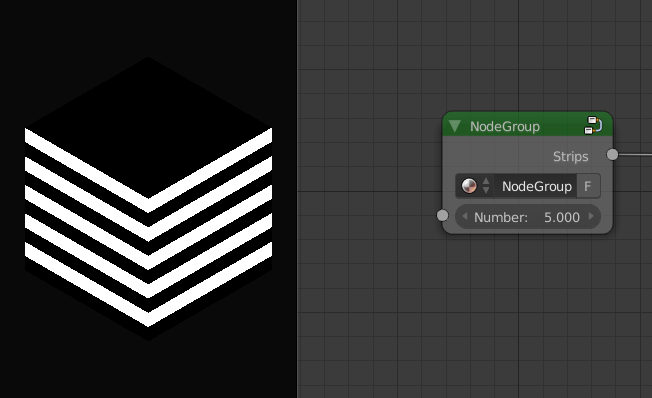 An alternative solution allowing to have regular strips or barcode like strips.

Here is the node group setup :

In red is a separate XYZ because we will rely on X value and don't use the Y value : this will give vertical strips. If you want to have horizontal or other, just change the input vector with a mapping, for instance.

The green part is for the barcode (left to right) :

The blue part is for the regular strips (left to right) :

In yellow a mix node which takes into account the mode we want : 0 for barcode like strips and 1 for regular strips.

Good question! I prefer to use a Checker Texture and a Vector > Mapping node.

Note the small Scale: > X: value. It is what turns the Checker Texture into stripes. Also note that I used Generated Texture Coordinates. This works for most simple objects and eliminates tiresome UV Mapping. This node setup produces the following result when applied to a plane.

Unfortunately, the Mapping > Scale: values cannot be accessed inside a NodeGroup.

3
Use another node to control Vector Mapping
0
How can we create a Bar code with the Texture Node Editor?

11
How to repeat an image which uses Sphere mapping in Cycles
1
Texture as Backfacing material in Blender Internal using Nodes
0
texture coordinate node in blender - how to control textures with it
0
Turning multiple materials into one texture
1
Texture Coordinate overlays another texture on my existing texture
0
How to make stripes on a cylinder
0
How to make a 2d cloud texture more "stylized"?
0
Use custom texture multiple times with different settings
5
How to make a spherical gradient texture "concave"?