How to implement deltaTime with blender's physics engine?

Why does deltaTime matter?

Why is this a problem?

Do I have any idea as to what we can do?

Ofcourse, we can simply have blender implement deltaTime into its physics. Alternatively, (what I tried to do), we can remove blender's physics and code our own physics engine. I've ran into a million problems with this, and I don't think it would make sense to go this way.

I was not able to come up with a solution (yet), but I'd like to share some progress I made. Maybe framerate-independent realtime physics is not possible, but let's keep the mindset "There is a way, we just haven't found it yet" for now.

blackhole mentioned, that it's extremely difficult to test whether Blenders Bullet Physics run in RealTime or not. So I looked for a simple real-world example which could serve as a reference for comparing an expectation vs. what Blender is doing. I have choosen a simple free-falling cube, which is placed at a height above an object so that it should hit the ground after exactly 2 seconds (no friction, air resistance or other fancy stuff).

Here's the setup (*blend below): 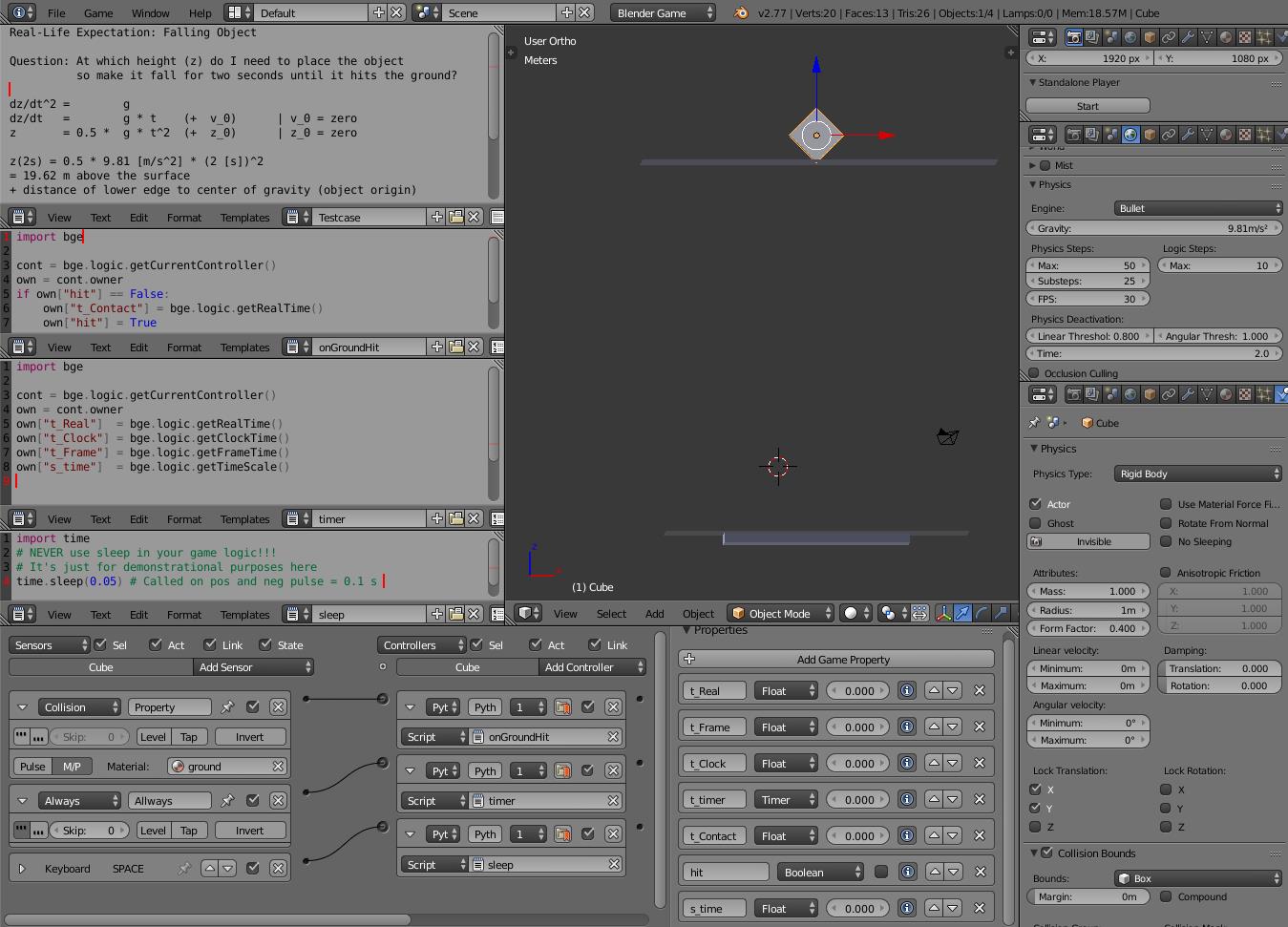 When pressing "SPACE", you can observe the framerate dropping - I put some sleep in a Python controller.

The first four of the following list are new since 2.77 as far as I know.

There are several versions of Time available, which I personally find confusing. I used getRealTime (system clock) to measure the time of collision of the falling cube.

Some of them are obvious to more experienced BGE users (than me), but I'd like to write them down nevertheless. The time of collision

Whatever I tried so far, I did not find a solution which let the cube hit the ground after 2 seconds when I let the framerate drop by the sleeps. In case frame-independent realtime physics are possible in Blender, there should be a way of making that happen. The new setUseExternalClock and setClockTime might be an option. Maybe my *.blend helps along the way.

Not the answer you're looking for? Browse other questions tagged python game-engine physics or ask your own question.

3
Ideas for how to make a cube explode into smaller cubes in game engine
3
How to calculate centripetal force in BGE?
4
How to set up game engine publishing (cross-platform) addon?
0
How to run physics simulation frame-by-frame using Blender's Python API?