Syntax in the Python API

I am a newbie with Python scripting in Blender. Lately, I have been browsing the Blender API documentation to figure out how to incorporate certain features into my scripts for Python. However, I am confused because I feel as though the documentation fails to provide the examples necessary to understand how the methods provided in the library would actually be used in a script.

For example, I am interested in (as part of a "poll" function in an operator) determining whether a object has been modified. I found the method bpy.types.Object.is_modified. Unfortunately, I can't make heads or tails of the information provided, as I know I can't just type in bpy.types.Object.is_modified to determine whether an object has been modified. It throws an exception in the Python console, even when I type in "scene" and "settings" for the parameters for the function (the parameters are listed as "scene" and "settings" in the library's function definition). I have tried leaving in "Object" in the command, and have also tried replacing "Object" with either the name of the object or a variable being used to represent the object. Similarly, I am not really sure how any methods in bpy.types.Object are normally called, because, although I do not really know, I get the impression that they are normally called using prefixes other than "bpy.types". Can someone please help me?

EDIT: Here is a picture showing what I have tried and the exceptions that I have received: 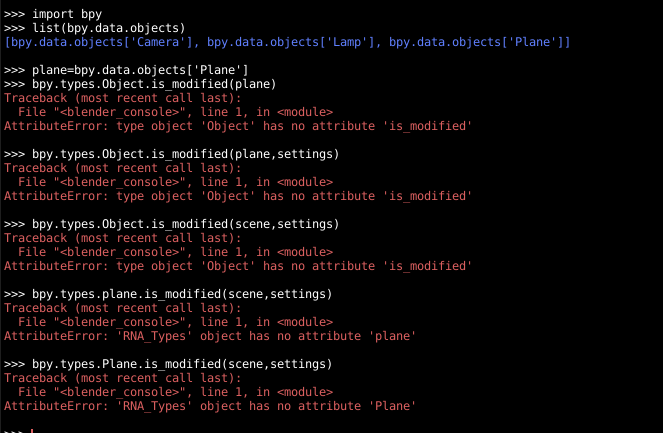 Take a closer look at the syntax the command needs.

Secondly, look again at the API for is_modified(). When it says (scene, settings) it doesn't mean those literal words.