How to merge two hand perspectives?

Using 123D catch (creates 3d models from picures) I created two mesh obj of an hand in dorsal perspective (palm down), and another in the palmar perspective (palm up). I'm trying to come up with procedure to merge them together and create a whole hand model.

I had a look at stiching UVs but it seems that I need the same number of vertices in both hands meshes. Bolean operations seem a reasonable option but the result requires some further modelling I don't have much experience.

Any insights to this project would be much appreciated. E.g. Which prodecure is best bolean vs. stiching, how to change vertices at boundary loop to the same number in both meshes. Or any other aspect for this. Scripting advice for these would also bee nice. I.e. what kind treatment do I need to give meshes to create a script for this.

edit:picture of the hands added if more clarification needed let me know. This is a rough model based on a old picture I have of my own hands 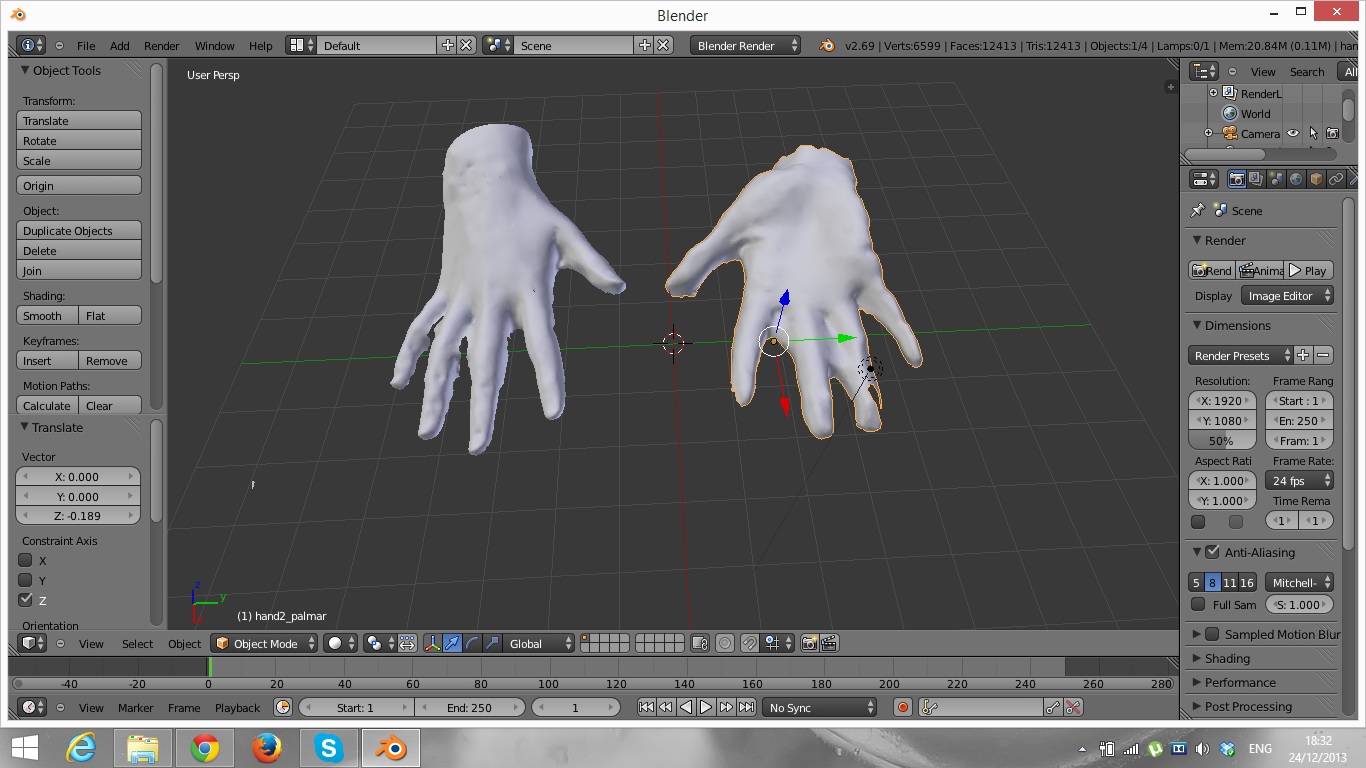 You can use the Remesh modifier for this.

The Remesh modifier is a tool for generating new mesh topology based on an input surface. The output follows the surface curvature of the input, but its topology contains only quads.

This results in a manifold mesh with only quads. Note that the hand pieces must overlap in order to get a single mesh.

I would just go for some retopo scheme. If you overlap and align them both you can then build up a new mesh using conventional methods for generating clean meshes from ones that are not so clean.

The problem you are facing is very similar to the issues facing Dynatopo sculpts so the solutions you have are pretty much the same as well.

Once they are aligned properly with each other, you can select them both and merge them into one object, Ctrl-J. Next you can use the CG Cookie Contours tool to rough out most of the new mesh that will be based on these two as one base.

Also, if you model a low-poly, rough hand shaped model, you can use the Shrink Wrap modifier to project the new mesh onto the scanned models.

My advice is that this is not the right way to go about creating a model of your own hand. There is no simple way to merge these two together, especially if they are not in EXACTLY the same position.

But let me answer your question first. Stitching would be the best, but you don't necessarily need the same number of vertices on each side, you just have to build the polys by hand (lol). There are some tools that make the process a little easier, like bridge (which is built into Blender, IIRC, tho you may have to turn it on in the add-ons part of the user preferences). To find bridge, press the space-bar and type "bridge." If it doesn't show up, it's probably not turned on yet.

A boolean would be the simplest option, but your two models have to be in EXACTLY the right condition for the boolean to do you any good.

If the two halves were in EXACTLY the same position (like two halves of a clam's shell) then a boolean union would be relatively simple, and would just require a lot of cleanup afterward.

However, if these were generated from two different pictures, and they're in two different positions, there's no magic way to just merge them together. Even if you were to stitch them together manually, you're going to have to do a LOT of fudging to make (for example) the index finger of one hand match the position of the index finger on the "other" hand. In which case, it's going to be really hard to guarantee that the final result actually matches your real hand. If you're going to do that much fudging, you might as well model it from scratch, the "traditional" way, and end up with a better topology.

If your goal is to model your own hand, this is probably the MOST difficult way to go about it ;-)

If your goal is to create a 3D model using 123Catch, then you need to follow their recommended method of taking pictures all the way around your hand, without moving your hand. This method will give you a single model, instead of two.

Not the answer you're looking for? Browse other questions tagged modeling scripting uv vertices or ask your own question.