How to create a hologram projection with light rays?

I am attempting to make a template for holographic effects in blender for a project I'm working on, however I'm not sure how to create a lighting effect for the projection of the hologram (The god rays and volumetric effect around the globe). Below I have included the blender file along with an example of the type of effect I'm looking to reproduce. Any help would be appreciated. 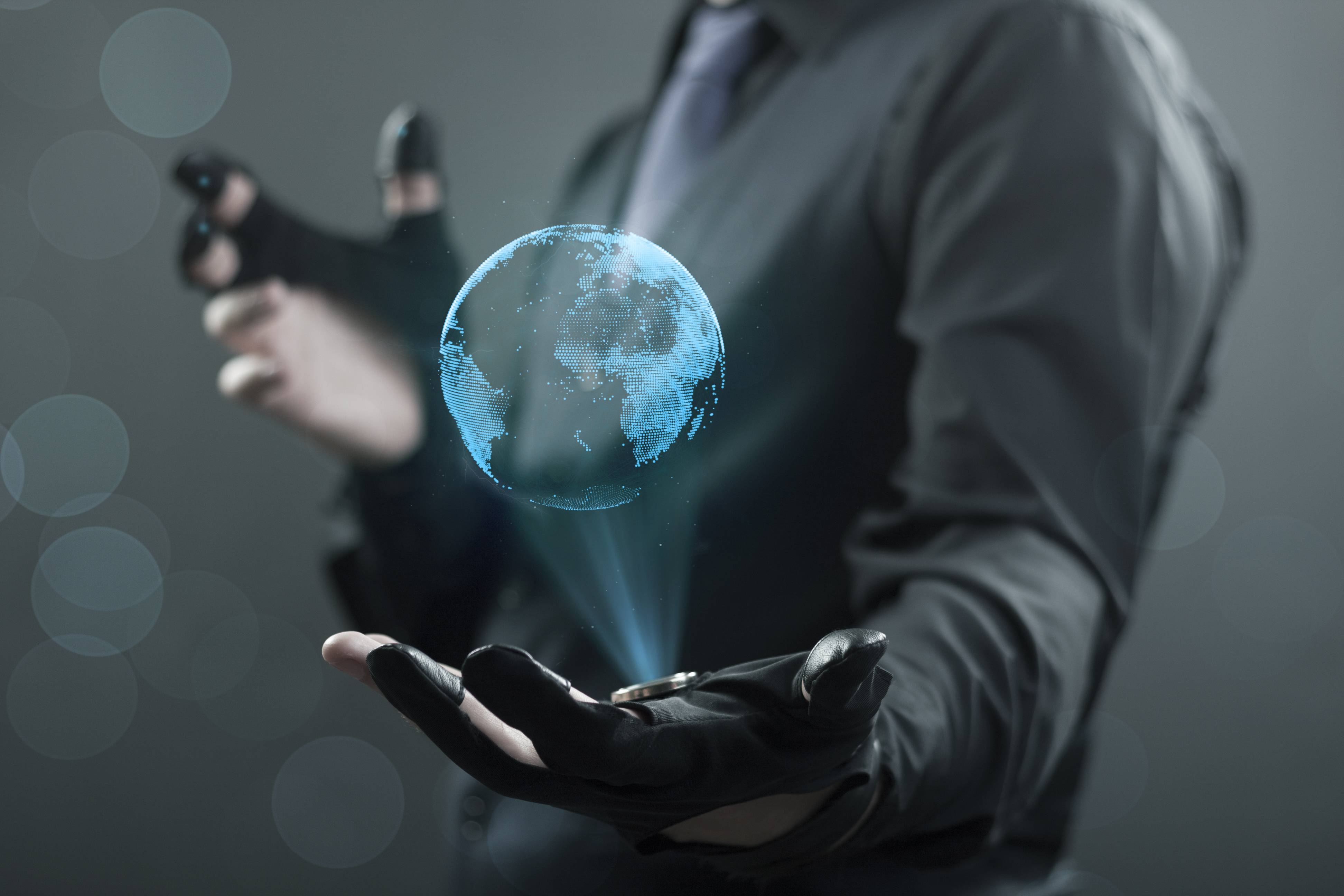 With some minor tweaks and modifications I was able to make an effect that looked pretty much exactly as I wanted. Thanks to PGmath, Shady Puck and everyone else for the helpful suggestions and tips. 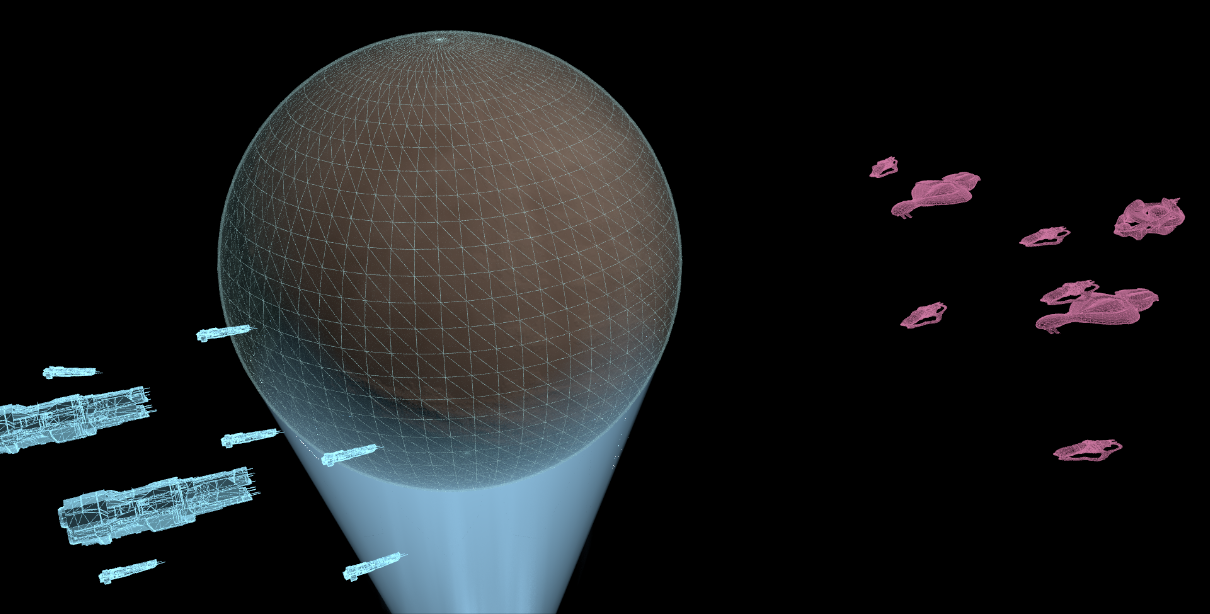 I was able to produce the following result. The planet is all one mesh with complex nodes. The god rays are a separate mesh with a keyframed Vector > Mapping > Location: value. The base is separate as well and uses the setup from How do I create metal materials in Cycles?

The planet is a UV sphere. The "god rays" are a Cone. The steel emitter is a Cylinder with a Bevel modifier and some Edit Mode editing (closing the gap between the beveled edges, adding the depression in the middle, etc.). There is also an Edge Split modifier and a Subdivision Surface modifier in that order, which were added after the Bevel modifier was applied. 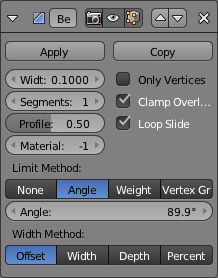 The following is the nodes for the planet. The leftmost nodes are mostly for mapping and bumping the Image Texture. The leftmost Layer Weight and Math > Add mix adds the Emission ring around the outside of the sphere. The Layer Weight > Facing and ColorRamp add some transparency around the edges. The Wireframe is self-explanatory. The Light Path > Is Shadow Ray takes away most of the object's original too-visible shadow, making it just visible enough.

The following is the nodes for the "god rays." These could probably be improved on a bit. The yellow Vector > Mapping value is obviously keyframed; it's what created the cool shifting effect at the beginning. The small Vector > Mapping > Scale: > Z: value stretches out the Noise Texture to make the rays look more straight. The Light Path > Is Camera Ray makes it a bit more transparent. The Light Path > Is Shadow Ray takes away most of the object's original too-visible shadow, making it just visible enough.

The following is the nodes for the steel emitter. They are better explained in How do I create metal materials in Cycles?

I personally would not recommend any more transparency (mistiness) because you start to lose visible detail. However, if you are dead set on it, you can do one thing.

Before the Wireframe factored shader, add another Mix Shader with the previous and transparency. Add a Noise Texture run through a Bright/Contrast node. This will create a patchy effect. 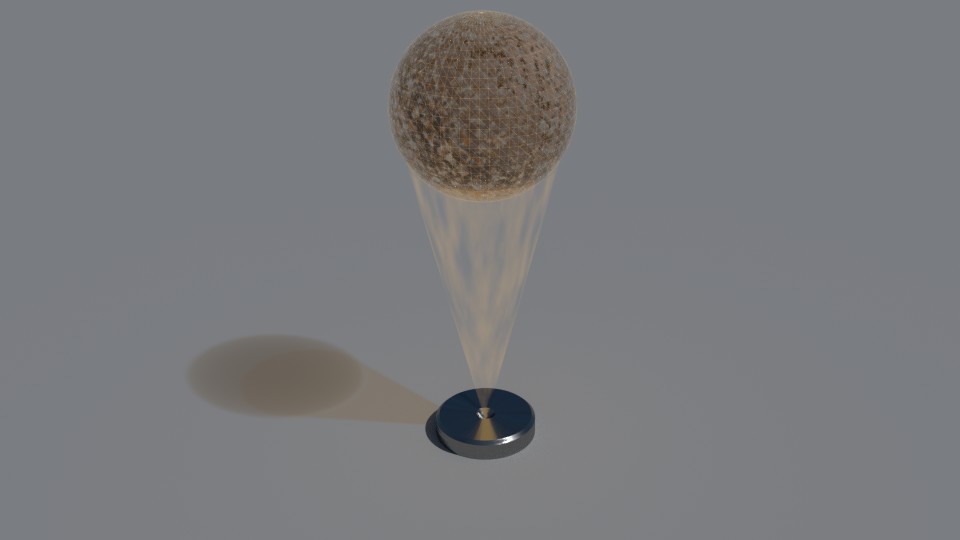 As for straight up mist, you would be best to go with volumetrics, but that's not exactly my speciality. You can look at Holographic lighting in Cycles for suggestions, though. There are some pretty good ones.

Here's the result I got: 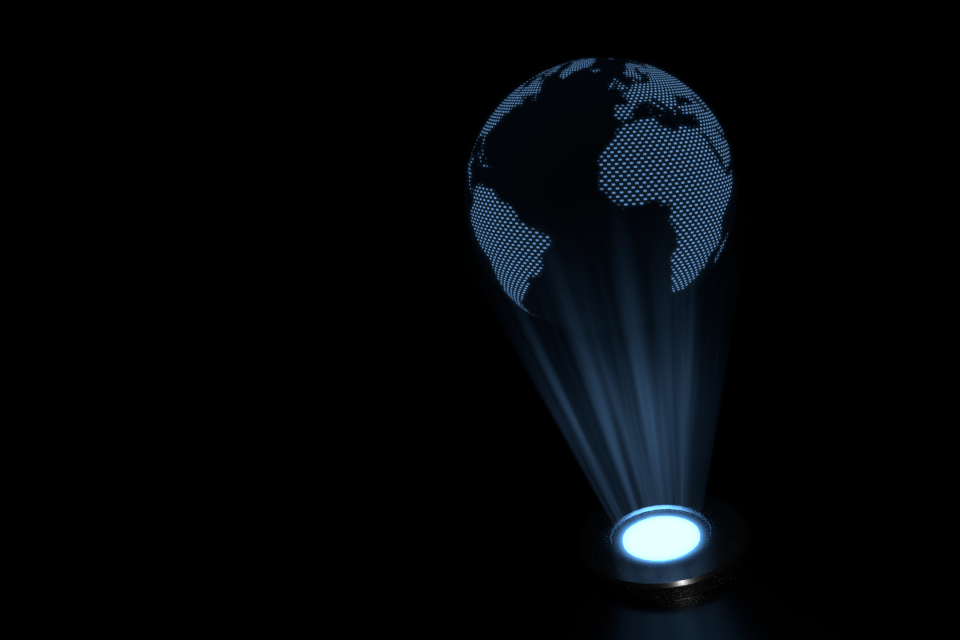 And here are my nodes:

Note: the Translate and Scale group nodes are homemade equivalents of the corresponding parts of the mapping node. They are explained here. I am using them here because they allow me to plug inputs into the transform values instead of being static like the mapping node is.

The basic idea is to use a noise texture to drive the emission strength of a volumetric emission material on a cone (actually a frustum). The noise texture is scaled up on the z-axis to create the vertical stripes. The real trick is to get the stripes to angle out from a point instead of just going straight up, and that is what all those other nodes are doing. (Sorry for the massive node spaghetti, I had to move them around to get it to all fit on my screen and be readable.)

Here is a .blend:

The above .blend contains a couple of enhancements. I set up a very simple armature to make adjusting the size and shape of the beam easier. I set up some drivers in the material so that the scale values are adjusted to match the armature-deformed frustum. It also contains the rest of the above scene.

You can do this easily with a combination of a black and white map image with a brick texture to give you the dots. 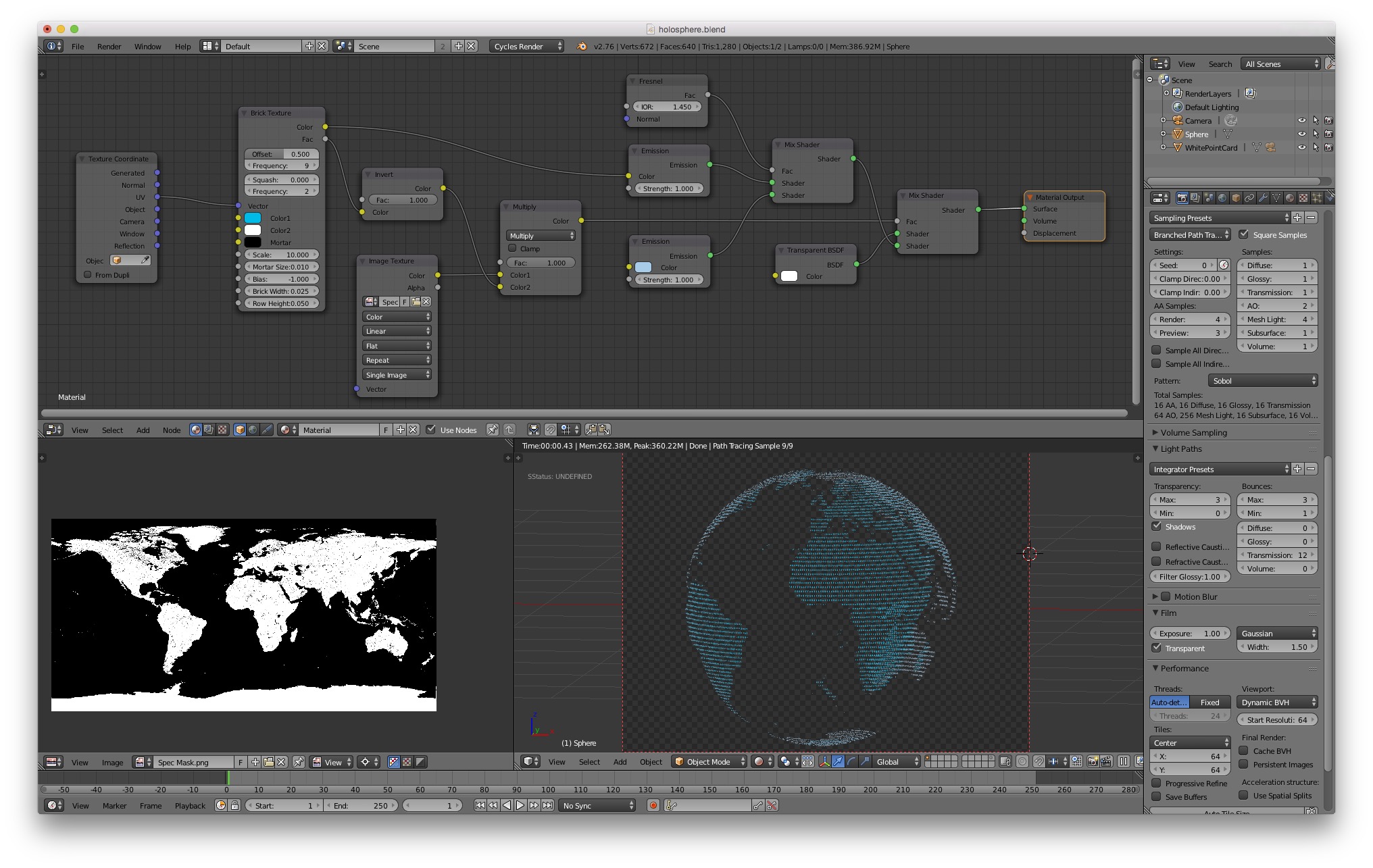 The globe can be generated by a simple sphere with a transparent texture on it.

All the other effects (light rays, lens effects, etc) have to be added afterwards in the compositor (or in an external tool like fusion or Photoshop/After Effects). They are no real geometry, they are only 2D textures, that are composed into the scene.

The topic would be to big for a single thread answer. if you need further intel, i suggest you read some general compositing guides.

30
How do texture coordinates work?
28
Control a property with no socket (color ramp swatch, etc) from a Group Node input?
13
How do I create metal materials in Cycles?
18
Correct way to render crepuscular rays in cycles?
9
How can I bypass a node?
4
Holographic lighting in Cycles
2
Project light through shape, text or symbol to appear in cloud or mist
0
Is there a way to make each icon in this render a hologram?
0
How to blend rays with hologram seamlessly