Why do my object collapses when moving armatures?

I have rigged the model, when moving or rotating the bone my model deforms.

Weight paint of my model,

When manipulate the bone, 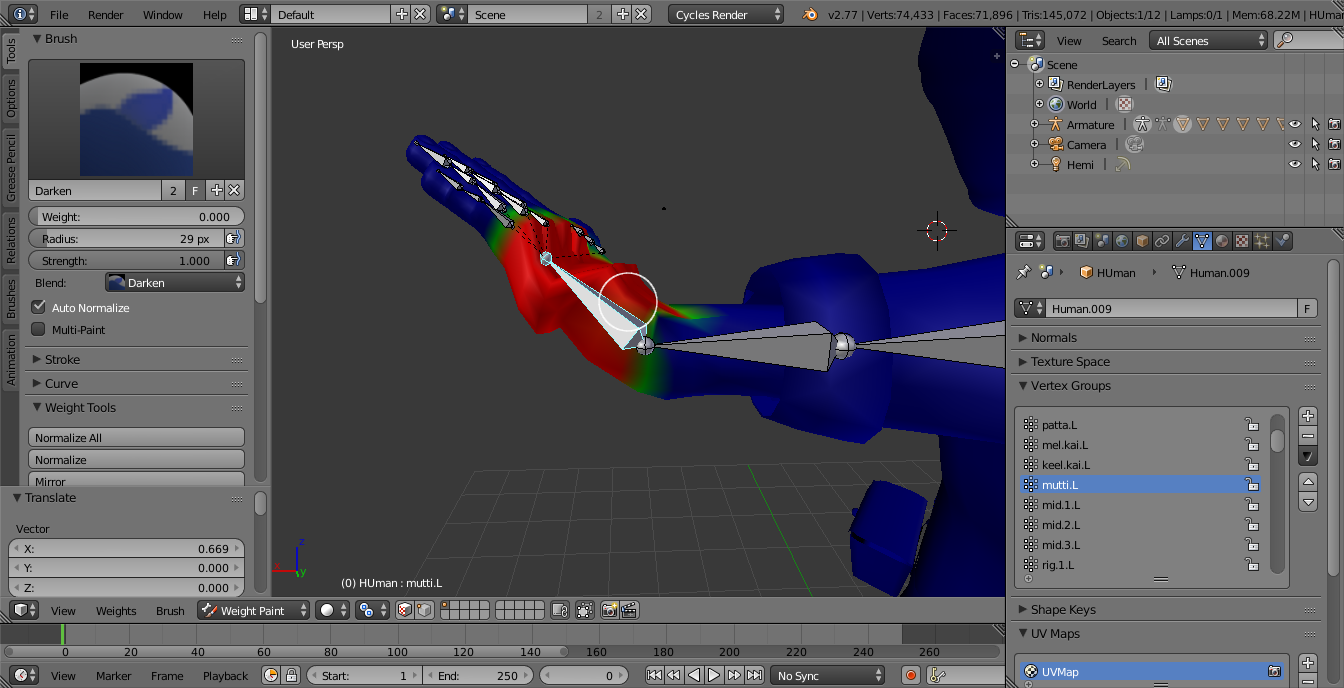 And I am pretty sure that I have weight painted model correctly, I used point weighting for this. Please someone help! Blender file here.. https://drive.google.com/file/d/0BwKqh0sK7cfeOFBOMEZFTVNJMmM/view?usp=sharing

Actually, there is issues with the Weight Painting, the Armature and the mesh itself. I'll try to explain:

You did the weight painting for the left hand side of the character, and it seems to be fine, but what went wrong is mirroring it over correctly to the right hand side. When you rotate the hand joint there, some stray vertices in the legs move also, which should not happen. When I checked the vertex groups, the right hand joint was actually ok. It took me a while to find out that those vertices accidentally became members of one of the finger bones (PK.1.R). Since the finger bones change their location and orientation when you rotate the hand (they are a child of the hand bone), strange stuff happens on the legs. So here the weights need to be mirrored correctly over to the other side. Unfortunately, mirroring them using Blenders Mirror Vertex Weights tool failed for me when testing, I'm not sure why. Also check the center bones (spine bones for example), one of them is moving a finger, and all of them seem to affect parts of the face, which they surely shouldn't.

On the mesh I would question why the shirt has a thickness to it. Remember when you model that you also need to weight paint it correctly. From the inside, which is a pain! You can do yourself a favour and delete the inner faces, they never appear in a render anyways. Also in the helmet, it looks to me as if a vertex has been dissolved accidentally. That n-Gon in the back just shouldn't be there, you should have three quads instead.

And lastly, when using an Armature, unless you really intend to do so, make sure the Subsurf Modifier comes AFTER the armature in the stack. In your model, the Subsurf is on top of it, in Blender this means it is executed first, and the resulting Polygons will then be deformed by the armature. Not only does this make the calculation slower, and also the deformation gets a "chewing gum look" to it, it also has the catch that the amount of subdivisions can differ between viewport and render time. That means, the deformation will be calculated differently when you render than when you work on it, so you never see the final result correctly. If you swap the stack order, the hand deformation looks much better immediately.

Not the answer you're looking for? Browse other questions tagged rigging weight-painting or ask your own question.